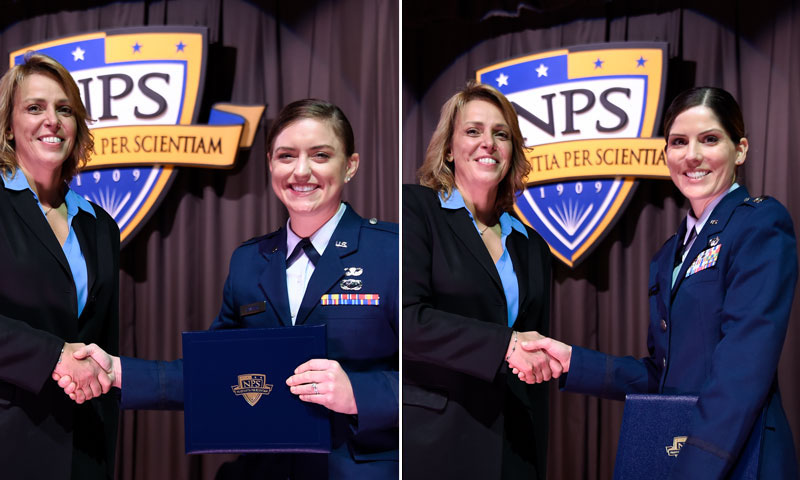 U.S. Air Force Capts. Holland Canter, left, and Tabitha Gomez, right, are congratulated by distinguished NPS alumna and commencement speaker, Cathy Lanier, during the Fall Quarter Graduation ceremony in December 2017. The recent graduates’ comparison of Amazon Business and GSA Advantage for their Master of Business Administration degrees is helping their service, and the DOD, understand how the government can take advantage of commercial purchasing systems.

The National Defense Authorization Act (NDAA) for fiscal year 2018 includes a compelling provision known as the Thornberry Act, which sets out to push reform to the DOD acquisition process through stronger systems of accountability, accessing new sources of information, removing unnecessary requirements, and improving the workforce.

Part of these reforms could be an enormous change in how the government makes small purchases through the Government Purchase Card (GPC) program, potentially opening up this massive volume of purchasing and federal customers to commercial online providers, like Amazon Business.

To understand what such a landmark change would mean to the DOD acquisition process, the U.S. Air Force approached the Naval Postgraduate School’s (NPS) Graduate School of Business and Public Policy (GSBPP), and two of its Airmen attending the university, to answer these questions. And the results of their work are getting a lot of attention, with widely-recognized finance and business media outlets such as Bloomberg and Federal News Radio publishing in-depth articles on their findings.

“The Air Force and NPS work hand and hand, and at the time, the Air Force Installation Contracting Agency had this topic as something they wanted to conduct research on, so Holland and I wrote a proposal and ultimately got the project,” said Gomez.

“What drove us to take this on for our report was how relevant it is to our job, and how interesting it is,” Gomez continued. “It is a good way to identify a lot of unknowns when dealing with commercial platforms and identify factors that need to be worked on to become fit for government use.”

Gomez and Canter’s research looked at the commercially-available Amazon Business, and the federally-managed GSA Advantage, to assess the benefits and limitations of using the government purchase card to buy lower dollar purchases from each platform, comparing the two in terms of prices, shipping costs, shipping time, ease of use and customer satisfaction.

“We did this by taking the top five categories of purchased items from the Air Force in 2015 and we came up with the 60 most commonly purchased items with the GPC and compared them on both platforms,” Canter said.

Price and shipping time are not the only factors in generating a satisfied customer, the authors note. In spite of these benefits to GSA Advantage, more than 70 percent of those surveyed preferred Amazon over other purchasing portals.

“A lot people use Amazon in their personal life so they are closely associated with how it works and its ease of use,” said Gomez. “For them, using Amazon is a preferable experience. There were also less problems on the back end of ordering things. While GSA advantage is produced by the government for the government, a lot of people had to experience growing pains to get it where it is today.”

Beyond price, and even user experience, there are many factors to be considered in GPC purchasing, reaching a total of $28 billion in 2017.

“Looking at prices alone is just one of many factors that is looked at during official purchasing,” said U.S. Air Force Maj. William Muir, military faculty in NPS’ GSBPP. “We also take into consideration socio-economic goals, such as supporting small businesses.“

Following the students’ detailed analysis, the study concluded with Canter and Gomez conducting in-depth interviews with representatives from GSA on suggested future endeavors and improvements to their website and platform.

“Our first recommendation to them was to do away with the hugely-unpopular minimum purchasing requirements,” said Canter. “Even though they were cheaper most of the time for the items we tested, they had a minimum purchase requirement for every single item. So if you wanted to buy, for example, a $1 pen, you would have to buy 50 of them, so you would have to still buy $50 worth of pens even if you only needed one.

“Lastly, one of the biggest improvements GSA can make is improving its image with younger buyers,” she continued. “Our survey results showed that age had a huge factor on whether a costumer would prefer GSA or Amazon, with younger buyers overwhelmingly preferring Amazon. A lot of this comes down to user experience.

“We have gotten a lot of attention, and it has been an honor to be able to talk about our study and know that it is not sitting on a shelf somewhere,” said Canter. “We will be traveling back to NPS from May 9-10 to present our research at NPS’ annual Acquisition Research Symposium.”

The Acquisition Research Symposium serves as a forum for the advancement of acquisition research, and the exchange of ideas among scholars and practitioners of public-sector acquisition. “Some of the biggest leaders in DOD acquisition will be there and we are looking forward to having the opportunity to present our research,” Canter said.

Ultimately, how ever the government utilizes commercial platforms will require detailed, thoughtful analyses, and that, faculty say, is where NPS can contribute to the process.

“What makes NPS so relevant is topics like this,” Muir noted. “It brings in students who are so knowledgeable in this area, with both of these students coming from purchasing backgrounds, and it gives us a place to look at things like the difference between supply chain management in and outside the government. Students bring knowledge and expertise and entrepreneurial, innovative ideas that let them take studies like this and conduct invaluable research.