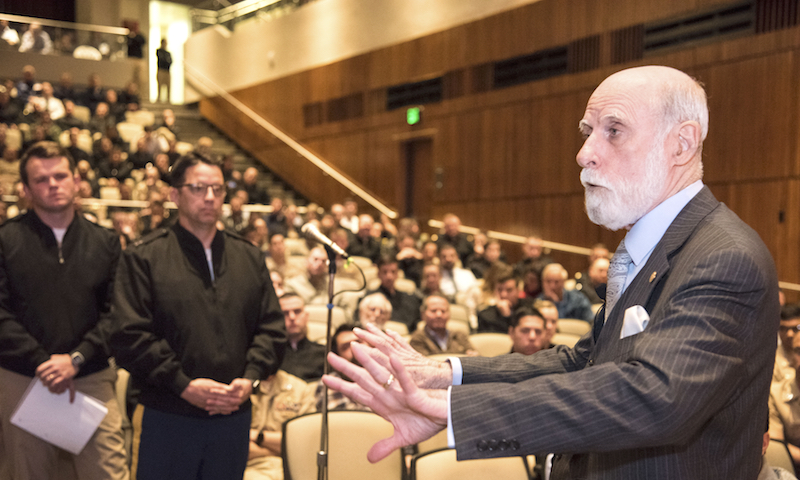 Widely recognized as a founding father of the Internet, Dr. Vint Cerf fields questions from NPS students, faculty and staff during his Secretary of the Navy Guest Lecture, March 5.

It’s not every day that an individual considered to be a ‘Father of the Internet’ comes to the Naval Postgraduate School (NPS), but when he does, he is met with an electrifying intimacy and candid discourse.

Vint Cerf, Google’s ‘Chief Internet Evangelist’ and Vice President, spoke with hundreds of NPS students, faculty and staff March 5 at a jam-packed King Auditorium for the latest in the Secretary of the Navy Guest Lecture series. Through a tête-à-tête with Dr. Peter Denning, NPS Computer Science Department Chair, and an extensive audience Q&A, Cerf took on a wide range of topics – from the Internet’s creation to Russian cyber hacking to gender inequality – replete with personal anecdotes.

“The Internet has turned out to be a pretty amazing tool,” Cerf said. “It’s extremely open, it invites new inventions, but we should be very thoughtful about what we ask artificial systems to do.”

Cerf is perhaps best known for his 1973 invention of TCP/IP protocols, the fundamental technology which makes the Internet possible.

Together with Robert Kahn, Cerf developed TCP/IP for the U.S. military to allow networked communications between computers so they could share information. This system, called Internet, laid the groundwork for the application of virtually every aspect of modern technology: Wi-Fi, the World Wide Web, e-mail, cell phones …

“We participated in the development of the ARPANET and packet switching technology in order to achieve a computer resource-sharing objective, and it worked,” he said. “What was exciting about that is that we demonstrated that different brands of computers could be made to communicate with each other.”

The ARPANET’s email application transcended military and scientific domains into the commercial realm. The Internet extended ARPANET’s concepts to embrace the interconnection of heterogeneous packet switched networks leading to a global infrastructure, a network of networks.

The Internet saw an explosion of general public interest in the early 1990s after the invention of the World Wide Web and browser interfaces, which rendered Internet content as if one were reading a magazine.

“In fact, there was so much interest that people voluntarily poured huge amounts of information into the Internet, not to get paid for it, but just because they wanted to know that other people found what they knew to be of interest and useful,” Cerf said.

“It was this desire to share information which I found quite surprising and unexpected.”

However, such openness has also had a dark side. Cyber-criminals challenge our national and international legal jurisdictions, and foreign adversaries manipulate social networks to interfere with elections and provoke anxiety.

As a country, we’re now faced with the desire to stay as open as possible to give our population freedom of access to information and freedom to share, while at the same time trying to fend off the side effects of publicly accessible networking tools, Cerf said.

“So here we are today. It’s 2018, and we’ve also discovered that the general population is not uniformly nice to each other, and that there are some parts of that population that don’t have our best interests at heart,” he said.

The only way to overcome this is to cultivate critical thinking, Cerf noted. The ability to discern between what content should be accepted and what should be rejected is of paramount importance, and one which can be obtained through computational thinking: breaking down problems, asking questions to solve them, and putting things back together again.

“Kids should be asking, ‘Where did this information come from? Who put it there and why? Is there any corroborating evidence that this information is valid or not?’ We should all be asking ourselves those questions,” Cerf said.

Preservation of human knowledge is at risk as rapid technological advancement swiftly obsoletes forms of digital records, whether through physical decay of media or through antiquated hardware and software to read them.

“I get so worried when people say ‘I digitized all the family photographs; I’m going to throw away the originals.’ I’m thinking, ‘You better not, those originals will last 150 years, the digital versions 10 if you’re lucky,’” he said.

Additionally, Cerf addressed concerns over the proliferation of the ‘internet of things’ – the wired and wireless integration of everyday devices, from coffee makers to home security systems to insulin injections – and anxiety over rapid advancements in artificial intelligence and machine learning.

The fundamental issue is how much autonomy we entrust to these systems, he said.

“I see these as tools to augment our capabilities, and people who worry that they will sort of take over should be worried, not about artificial intelligence but the autonomy we grant to that software: what decisions it is allowed to make and should we permit it to make those decisions.”

Dialogue touched on a variety of subjects ... the rapid expansion and censorship of Chinese Internet use, aversion to cryptocurrency and block chains, as well as the ability of a computer to distinguish between human and computer interactions.

Also discussed was the current public debate over net neutrality, and Cerf provided an insider’s overview of the Federal Communication Commission’s historic attempts to mitigate Internet access between cable and telecommunications companies.

Following decades of oscillation on whether or not to regulate the Internet, service providers are now under no obligation to observe any neutrality and are free to interfere with the subscriber’s service.

“So here we are today: the consumers are at risk, and I’m hopeful that at some point we will recognize that as a serious problem,” he said.

The final question of the event centered on Google’s firing of software engineer James Damore.

Damore circulated an internal memo in which he claimed that because women exhibited a “stronger interest in people” and “neuroticism,” they were less suited to computer science careers.

This prompted a public outcry and media scrutiny on Google’s efforts to promote diversity. It also hit a nerve with Cerf, who reflected on his personal experience. Fifty years ago, women made up fifty percent of the field, but this statistic shifted significantly over time.

This was due, Cerf said, to “a bunch of hormone-filled young jerks” thoughtlessly driving young women away.

“I don’t blame the women for walking away, but dammit, I don’t want to see that happen anymore,” he said emphatically, which was immediately met with thunderous applause from the audience.