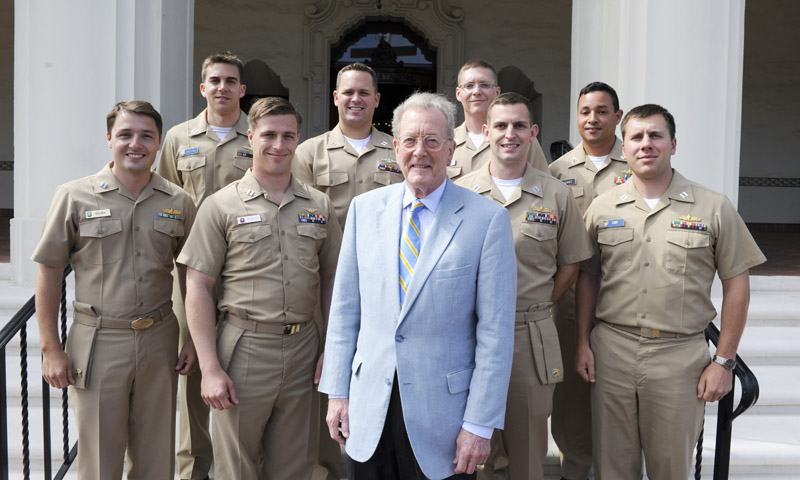 Each year, about seven students from the Naval Postgraduate School travel to the U. S. Naval War College in Newport, R.I., to become Chief of Naval Operations Group (CNO SSG) Director Fellows.

Established in 1981, the CNO SSG is a concept generation team, tasked by and accountable to the Chief of Naval Operations, to ideate, explore and innovate revolutionary naval warfighting concepts at the operational level of war. Each year, the CNO gives the SSG a new research theme and tasks them to prepare one final report that summarizes the year’s findings and recommendations. Past SSG work includes conceptualizing ForceNet, developing synthetic fuels, and integrating the rail gun into naval tactics. NPS students have been involved in the effort since 1995 with SSG XV.

The CNO SSG is comprised of three diverse groups of fellows that represent technologists, operators and analysts. The six Technology Fellows are mostly non-military researchers with experience in applied science and engineering. The 10 CNO Fellows are senior officers with about 20 years of service. And finally, the 14 Director Fellows are mid-grade officers with about 10 years of service. Director fellows matriculate with roughly equal numbers from the Naval War College and NPS.

“Adm. Hogg believes some of the most innovative ideas come from mid-grade officers because they have recent operational experiences and have benefitted from the exceptional educational opportunities at NPS and NWC,” said Coté, who recently completed participation with the SSG XXXI Director Fellows.

"As a newly-designated member of the SSG, I will be working with my colleagues, experienced and distinguished senior officers, and hand-picked scientific experts in order to develop revolutionary new concepts to shape future naval strategy. That is not just a byline, it is our mission and that excites me because it will have a measurable impact on how we fight in the future,” said Tremblay, a space systems engineering student in NPS’ Graduate School of Engineering and Applied Sciences.

After an initial period of familiarization with the process of innovation, the entire SSG is divided into five self-selected concept teams with representation from each type of fellow. This type of organization brings multiple viewpoints, diverse specialties, and several levels of experience to collaborate on the concept team’s portion of the overall theme. For the remainder of the research period, the concept teams become the central operating unit to advance the SSG’s work. Throughout the SSG, each member is given significant flexibility to travel and meet with leaders in academia, industry and government. 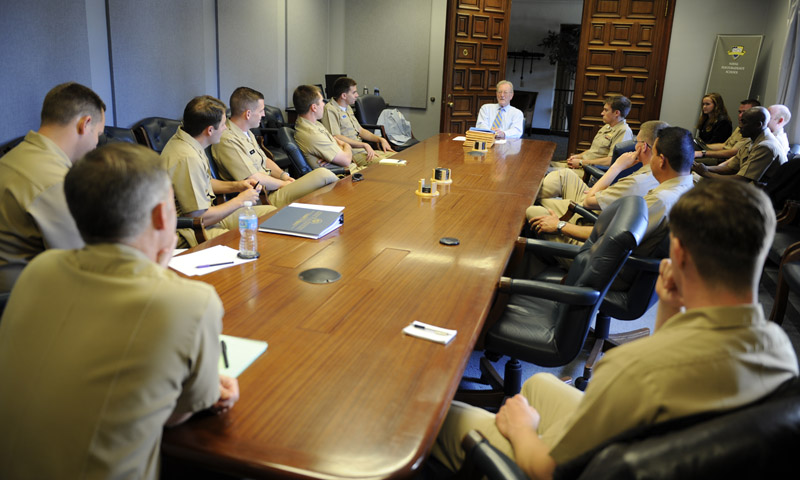 Coté says his experiences and studies as a student at NPS were immediately applicable to participation in SSG XXXI. He noted, “As an NPS operations research student, I am surrounded by critical thinkers from every service and warfare designation. When I joined the SSG, I felt equipped with a unique skillset to help our team think critically about how to integrate a systematic approach to generate, ideate and assess warfighting concepts that focused on some of our most intractable and revolutionary warfighting problems.”

All of the branches of service and warfare communities have been represented in the SSG, supporting the idea that a diverse team benefits the process of innovation.

“This past year, our SSG team focused on protecting the electromagnetic environment as a primary warfighting arena, and reducing the U.S. Navy’s reliance on the electromagnetic spectrum,” Coté said. “Too often, our security failures have been the result of a lack of imagination – about the enemy, our friends, and our own military.”

As a part of the governance and policy concept team, Coté’s SSG research led him to visit Harvard Law School, Massachusetts Institute of Technology, Microsoft and Qualcomm to name a few.

“As an SSG Fellow, I was able to apply my expertise in applied mathematics to my desire to redefine the way the Navy fights … The CNO SSG was a tremendous experience. I think my refined ability to prioritize, analyze and optimize will most certainly benefit my remaining work at NPS, but I am also confident that it will help me with future decision-making challenges as an officer, analyst and leader, especially in a resource-constrained environment.”

Participation in the CNO SSG gives NPS students a very unique opportunity to present their finished work directly to the Chief of Naval Operations with the intent to improve warfighting at the operational level. Some participating students return to NPS in time to change their theses to topics of SSG-related research.

By design and with proven results, diversity and non-linear thinking are well known keys to revolutionary concept generation and innovation. Students at NPS are impacting the future of the Navy through their substantial presence in the CNO SSG.

By all accounts, participation in the Strategic Studies Group can be a life changing experience for those involved, and any current and eligible NPS students are encouraged to apply.