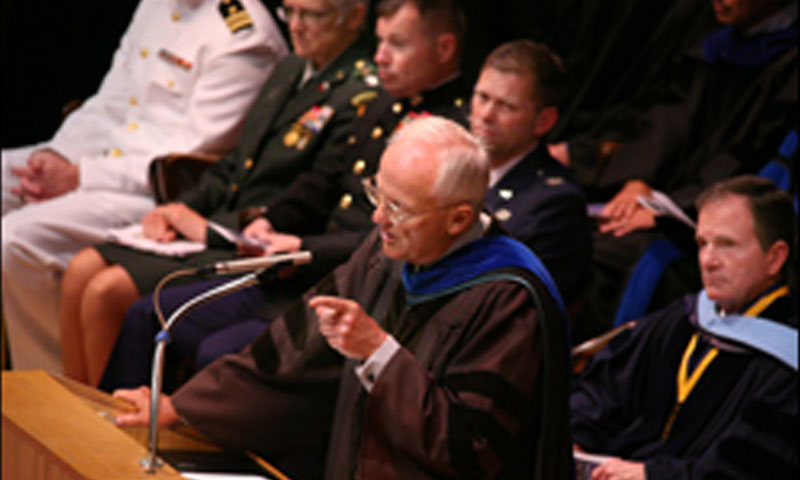 Institutions of higher learning usually have to reach beyond their walls for dignitaries to speak at graduation ceremonies. But in a rare moment for any university, the Naval Postgraduate School tapped a true in-house dignitary, Professor of Public Policy and former Dean of the Graduate School of Business and Public Policy Douglas Brook, to give the keynote address at spring commencement exercises, June 19.

Before the graduates crossed the stage, President Daniel Oliver proudly introduced Brook, who recently returned from a tour as a high-level presidential appointee at the Pentagon, as “one of our own.” The former Naval Supply officer, who is also Director of the NPS Center for Defense Management Research, served as Assistant Secretary of the Navy (Financial Management and Comptroller) and then Acting Under Secretary of Defense (Comptroller)/Chief Financial Officer in the final 13 months of the second Bush administration. From 1990 to 1992, Brook was Assistant Secretary of the Army (Financial Management) as well as Acting Director of the U.S. Office of Personnel Management in 1992.

“Doug Brook is a role model for us all,” Oliver said. “He has served his country as an accomplished career reserve military officer [30 years in the Naval Reserves, retiring at the rank of captain]; has been successful in the private sector [Vice President for Government Affairs with LTV Corporation]; is a distinguished educator and academic; and has served his country on a number of occasions in very high-level positions of responsibility at the request of somewhere between two and four presidents, depending on how you want to count them. We’re privileged to have him back with us now as a full-time member of our faculty.”

Upon taking the podium Brook returned the compliment, noting that “If ever this institution had the right leader at the right time, it does now.”

Brook then rallied the 206 graduates with a heartfelt, experienced-based tribute to “the transformational power of education.”

“Education has the power to change people’s lives,” Brook stressed. “It certainly has changed my life more than once, and I hope it has had that power for you as well. As you complete your graduate work here at NPS, it is our hope and expectation that you are, and should be, changed in some way for the better – professionally, to become better equipped with new knowledge to take on additional responsibilities as you progress in your careers.

“As you do, the one thing that’s certain is that the future is changing and uncertain and that an educated military is essential to our future national security,” Brook said. “And because we’re in the midst of this transformation, we can’t see it all, or see it clearly. So what, then, is our – is your – responsibility? It is to create our own futures – to do nothing less than lead us into and through this time of historic change. And from my recent experience, I can tell you that our leaders are redefining the very meaning of the terms ‘national defense’ and ‘national security’ while exploring the limits of both power and the power of limits – asking not just what can we do, but what should we do?

“We now look to you, as our newest alumni, to perpetuate and enhance the reputation of the Naval Postgraduate School by your performance, your intellect and your service,” Brook continued. “You are now permanent members of a community that consists of astronauts, military leaders including the present Chairman of the Joint Chiefs of Staff, captains of industry, and even a king [King Abdullah of Jordan], all of whom credit their education at NPS and represent this institution in their accomplishments. It’s reasonable to think that there are such future senior leaders here in this auditorium today.”

The graduates and their family members joined faculty and staff in the Barbara McNitt Ballroom for a festive reception following the ceremony, where President Oliver, Provost Ferrari and Marine Corps Maj. Eric Rose, recipient of the Monterey Council of the Navy League Award for Highest Academic Achievement, shared the honors of cutting the cake with the School’s ceremonial sword.

Two especially happy graduates were German Army Lt. Col. Marc Walther and Royal Australian Navy Lt. Cmdr. Lincoln Trainor, who both met the “love of their lives” while at NPS. Walther met his fiancé, Janet Else of Santa Cruz, now a wildlife biologist in Monterey, at a birthday party for another student, and Trainor recently married his beautiful new bride Dana, also of Monterey.

“The value of NPS is far more than a degree,” Trainor said. “It’s about forging long-term relationships and friendships. While here, I met a true lifetime friend in ‘Oz’ [Turkish Navy Lt. j.g. Omur Ozdemir], and was doubly blessed to find my life partner and now my beautiful wife.”

Trainor’s parents, “Bo” and Anne, came all the way from Melbourne to share their son’s day. “I’m a very proud father,” said the senior Trainor, himself a nine-year veteran of the Australian Royal Navy who served in Vietnam. 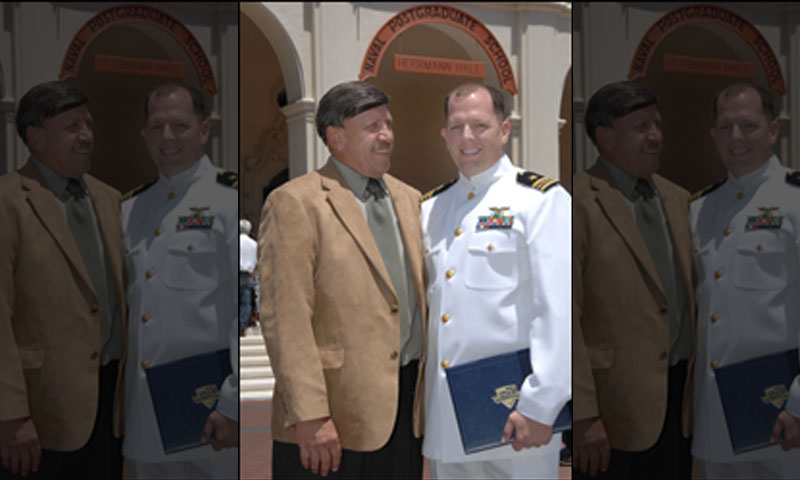 “NPS is a great learning experience of a very high-quality level,” said Walther, “where one of the most important things you get is insight on other countries’ points of view. Being here has really extended my knowledge and widened my horizons.”

“It’s a great feeling knowing you’re the third generation that’s gone through this place, with all the family history here,” Scott said.

“It’s amazing to be back,” agreed his father. “This is the greatest thing ever.”