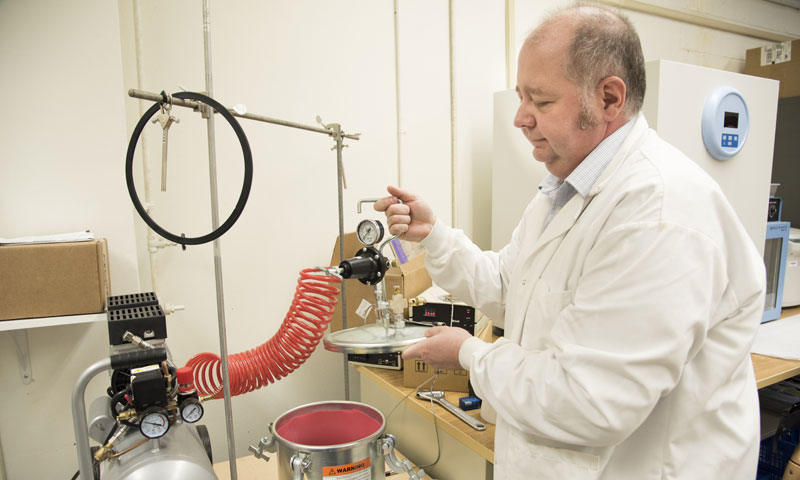 A Naval Postgraduate School (NPS) applied physics associate professor has just been awarded a patent that could potentially revolutionize the treatment of cancer.

Dr. Emil Kartalov received the patent, March 20, for work he did at the University of Southern California (USC) to use a biochemical method – microfluidics – to mark the DNA of mutated cancer cells.

“In other words, it’s like taking a tiny little pencil to write down the coordinates on the exact piece of DNA so that it can later be analyzed,” Kartalov explained. “We can tell how many of them there are and where they came from by these coordinates, and suddenly we have an enormous amount of information to work with.”

Time is a critical component in fighting cancer, and Kartalov says this process can dramatically reduce the gap between initial diagnosis and successful treatment.

Currently, targeted therapies are quite effective at decimating cancerous cell populations. The problem, however, is that nature always finds a way ... 99 percent might be eradicated, but that remaining one percent can lead to a resurgence which overwhelms the patient.

“The few mutants that are resistant have found a way around [the targeted therapy], they’ve short-circuited it somehow,” Kartalov said. “Suddenly those guys are going to repopulate and they potentially can kill the patient.

Oncologists often chalk this up to ‘acquired resistance,’ but Kartalov says the resistance was already there. Mutations will always exist for any given population; the key is being able to identify them.

Studying DNA sequences is the easy part ... Since the 1980s, a process known as Polymerase Chain Reaction (PCR) has been available to efficiently make copies, like a Xerox machine, of focused segments of DNA. The difficulty comes in when incorrect DNA gets amplified through the PCR process.

“Essentially, you are trying to see only a particular page of a book, but the Xerox machine can fail and instead start copying the rest of the book,” Kartalov explained. “Then you miss the critical page.”

Kartalov’s patent circumvents this. Instead of replicating an entire sample, it compartmentalizes it into little volumes, allowing reactions to be done for each. Using microfluidics, coordinates are assigned to each tiny chunk so that they can be isolated and studied in turn.

“Now, when you amplify the sample, you only compete with another hundred cells rather than a hundred thousand cells,” he explained. “You’re tilting the playing field in your favor so that you can identify the particular mutation much more easily.”

Being able to identify how many mutations exist, and where they are, opens the door to a wealth of information on how the disease changes and adapts in the individual patient.

Interesting questions on this morphology can now be addressed. What is the concurrence of different mutations and where do they happen? Do they happen only in the cancer or in normal tissue?

The answers to these questions and others means more efficiently tailored treatment.

“So instead of the patient being a guinea pig, you already know which drugs are going to work and which ones are not going to work,” Kartalov said. “That way, as they’re running out of time, you can actually address it in a much more intelligent and well-designed manner.”

Kartalov filed the patent a number of years ago while an assistant professor at USC. In 2016, he came to NPS and became a civil servant, thus precluding any involvement in commercial development of the technology due to potential conflict of interest.

“But that’s OK,” he laughed. “It was a reasonable sacrifice to become part of the NPS team, and it’s a trade-off I’m not unhappy about.”

Others will take up the ideas of the patent and move the ball forward, and Kartalov has turned to integrating his biotech background into interdisciplinary endeavors with military applications.

When asked about the personal significance of his latest patent, Kartalov smiled and quoted Horace, “Exegi monumentum aere perennius,” which translates to, “I have made a monument more lasting than bronze.