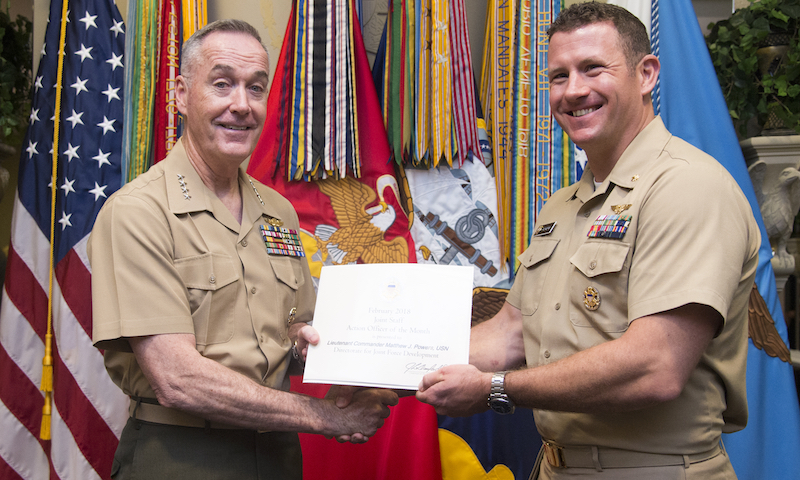 Lt. Cmdr. Matt Powers, right, a 2012 operations research graduate from NPS, is recognized by Chairman of the Joint Chiefs of Staff (CJCS), U.S. Marine Corps Gen. Joseph Dunford as the Joint Staff Action Officer of the Month for an analytical tool he built to assist in the evaluation of unstructured, textual data.

Lt. Cmdr. Matt Powers, a 2012 graduate from the university’s Operations Research department, was recognized as the Joint Staff Action Officer of the Month for his efforts as lead military analyst with the CJCS’ Joint Lessons Learned Division (JLLD), an achievement he attributes, in part, to his colleagues and to his NPS education.

“I credit J7 JLLD leadership and colleagues for creating an encouraging professional environment, my NPS Operations Research (OR) education, my incredible network of like-minded analysts and supportive mentors, and the Military Operations Research Society (MORS) for this tremendous opportunity!” Powers noted proudly in sharing the achievement on his social media.

The analyses Powers performs in his current duties with JLLD are built directly on the foundation of his studies at NPS, he says. His thesis, The Exponential Expansion of Simulation, explored how computer simulation has increasingly become a researcher’s ‘first resort’ in tackling complex world issues to support decision makers.

“The work and study we did at NPS opened up a whole new world to me,” Powers said. “It was like learning superpowers: new analytical techniques and new ways of seeing and questioning a problem, and answering it in ways you wouldn’t have thought of before, no matter how smart you are.”

After departing NPS, Powers successfully applied his new ‘superpowers’ to address increasingly daunting national security questions, first at the Joint Center for International Security Force Assistance in Fort Leavenworth, Kansas, and then on the CJCS’ staff with the JLLD in Suffolk, Virginia.

Not long after arriving at JLLD, he focused on a particularly vexing issue. Analysts on his team were pouring through thousands and thousands of documents, attempting to identify data trends in lessons learned observations.

“There’s a lot of danger in that, both analyst bias and fatigue,” Powers related. “Literally, by the end of the day after you’ve read so much, your eyes start to go cross and you leave out some important stuff; I know what the problem is because I’m in it.”

He knew there was a better way.

While a student at NPS, as part of the OR curriculum, Powers learned how to unlock the analytic potential of spreadsheets using advanced programming and formulae beyond its conventional day-to-day use.

Ruminating on this, he originally conceived of using spreadsheets for unstructured text analysis under the name Bayesian Enhanced Algorithm To Advance Reading Metadata and Yardsticking, purposefully BEATARMY.

As the work evolved, and he got a bit more serious about the possibilities, Powers realized he could devise a way to use spreadsheets to enable analysts with varying levels of technological experience to employ rigorous computational methods to large amounts of unstructured, textual data. This system, which he termed “Content Heuristic Unstructured Parsing and Predictive Electronic Tool” (CHUPPET), identifies relevant themes within large sets of text data.

“CHUPPET is basically two spreadsheets that I built that apply some machine learning, text-mining algorithms to unstructured collections of text,” Powers explained.

“It enables Google-like search capabilities as well as similarity and cluster analysis of collections of texts,” he added. “It applies statistical weight to your topic and visualizes the data so that you, as an analyst, can see where topics start to even out in their relevance.”

In other words, it makes their jobs a heck of a lot easier, providing more accurate, reliable deliverables to the Chairman of the Joint Chiefs of Staff. And it’s free!

“We’re able to do it internally without having to reach out to industry and all the headache and money that comes with that,” Powers said. “I was able to make something for free that answers the mail, so to speak.”

The work Powers accomplished with CHUPPET for JLLD earned him Dunford’s recognition, and has garnered significant interest beyond the CJCS lessons learned community.

“It’s really caught fire across all services and inter-agency because, no matter what your job is, it’s very common to deal with a lot of text and documents, and CHUPPET is applicable across the board,” Powers said.

“I know that I wouldn’t have been able to do any of this without the education I received at NPS,” he added. “It’s changed my life.”