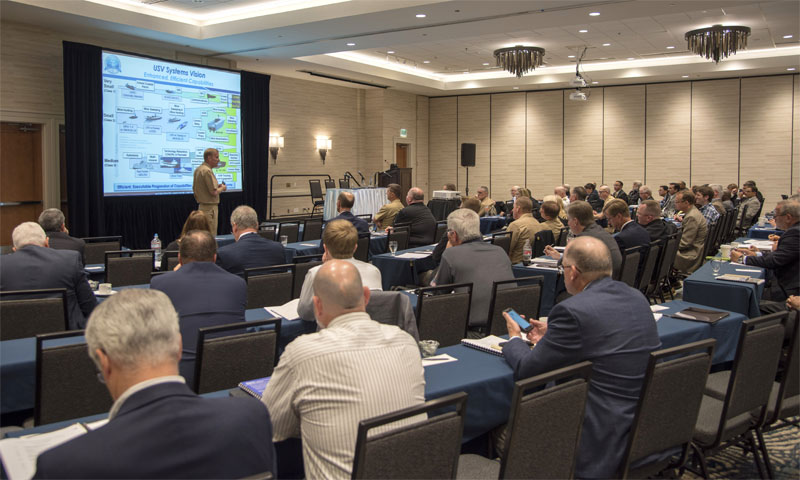 The latest innovations in mine warfare technology are presented during the biennial International Mine Warfare Technology Symposium, held May 22-24, 2018 at the nearby Embassy Suites hotel in Monterey, California.

The Naval Postgraduate School (NPS), the Office of Naval Research (ONR), Navy’s Office of Expeditionary Warfare (N95), and the Consortium for Robotics and Unmanned Systems Education and Research (CRUSER) teamed up to co-sponsor the 13th International Mine Warfare Technology Symposium in Monterey, Calif., May 22-24, 2018.

The symposium brought together diverse subject matter experts with unique operational experiences, discussing current issues in the fleet in the field of mine warfare, while focusing on the impact of technology.

“Certainly, this warfighting domain affects a lot of people. There are a lot of stake holders that are involved in working this problem, whether it’s industry, academia or our foreign partners. Bringing all of those together as a coalition to examine this area holistically is a challenge,” said NPS Chair of Mine Warfare, retired Rear Adm. Rick Williams, lead organizer of the conference.

“The pace of technology, and how quickly we take that technology and incorporate it into current systems delivered to our warfighters to stay ahead of the threat, is critical,” Williams continued. “I think that if you look at the pace and rate of change in technology, from artificial intelligence to data analytics, the potential in those fields as it relates to mine warfare at large has tremendous potential.”

“We’re getting a desired effect of bringing together expertise and interest in mine warfare to improve our capability in this subject area,” said Coffman. “We’re on the move, we are working on next generation expeditionary warfare.

“Join the revolution,” he added. “We have exciting things happening both in technology and in operational capability.”

NPS faculty take full advantage of the symposium, as presenters and attendees. Dr. Doug Horner, a Research Assistant Professor in NPS’ Department of Mechanical and Aerospace Engineering, is looking at combining current and future unmanned systems to provide an advanced level of multi-domain awareness, and do it autonomously.

“Instead of dealing with single systems in a single domain, what I am thinking about is multi-network over multi-domain … combining aerial, surface and undersea systems,” Horner explained. “In this case, I’ll be talking about expeditionary warfare, where a lot of the principles apply to mine warfare itself.”

Horner spoke during the symposium on autonomy and the new mission capabilities that new technologies create.

“Say for example, you’re going to an island and you want to do a direct-action mission with naval special warfare,” Horner explained.

“What you want to be able to do is follow them through the different phases of the mission – insertion, infiltration, actions at the objective, exfiltration and extraction. You want to provide an umbrella of support over them and the target area,” he continued.

NPS not only supports the symposium with speakers and subject matter experts, it also presents a great opportunity for students to hear directly from senior leaders on the key issues that are on their radar.

NPS alumnus Sean Kragelund, now a research associate in NPS’ MAE department, described his experience coming back from the symposium to his lab in Halligan Hall.

“It was great to hear the speakers at the symposium, in particular Maj. Gen. Coffman who spoke [directly] to the national defense strategy ... It’s great to get that perspective and begin to think about what changes might be on the horizon,” said Kragelund.

“You don’t really have separate manned or unmanned systems anymore ... You have manned teams working with unmanned teams,” he continued. “In our lab, we have Navy and Marine Corps students working directly with these systems. It is a learning process for us as well as for them, and they come away with great ideas that they can apply that to their thesis research.”