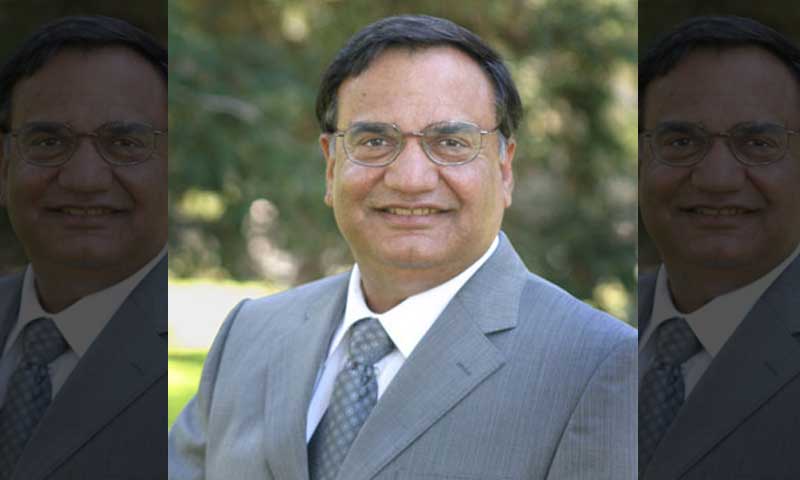 Sometimes it does take a rocket scientist to be elected a Fellow of the American Institute of Aeronautics and Astronautics (AIAA).

Naval Postgraduate School Distinguished Professor of Mechanical and Aerospace Engineering Brij Agrawal -- a world leader in satellite communications, high energy lasers, relay mirror spacecraft and adaptive space optics -- recently learned that he has been elected an AIAA Fellow, the highest distinction conferred by the world professional society dedicated to the science, technology, engineering and arts of aeronautics and astronautics. Agrawal is also Director of the NPS Spacecraft Research and Design Center.

"I would like to welcome you to the grade of Fellow and extend my personal congratulations on this prestigious honor, which has been accorded you by your professional colleagues," AIAA President George Muellner wrote in his letter alerting Agrawal of his elevation, Nov. 25. The Institute made the formal announcement in a press release Dec. 1.

"Professor Agrawal has made many personal and exceptional pioneering contributions in astronautics, providing leadership in educating engineers in industry, students in civilian universities, and military officers at the Naval Postgraduate School, and in developing space technologies for commercial and military classified satellites,” said the nominating statement. "He is a national asset in aeronautics."

"It's a great honor to be included in the company of people like Air Force General Bob Dickman and Admirals Richard Truly and Thomas Betterton, now our own NPS Chair of Space Technology," Agrawal said in an interview following the announcement. "I've been a member of the AIAA since 1970 and an Associate Fellow since the mid '70s, and it's a great satisfaction and good feeling to be recognized by your international colleagues in this way. It's a statement that you’ve made strong and permanent contributions to the field.

"You do the work because you want to and because it's important, but I think becoming a Fellow will give even more energy and motivation to continue the research," Agrawal noted. "And it will add to the solid credibility of the space-related research and education we do here at NPS and increase our cooperation with top people in the field worldwide. NPS is really on the cutting edge, and other universities are increasingly coming to work with us."

"The American Institute of Aeronautics and Astronautics is the premier professional organization for aerospace sciences, and being elected a Fellow is a major recognition of one's research and academic contributions to the field," said Dean of the NPS School of Engineering and Applied Sciences Sivaguru Sritharan. "This is a well deserved and long due recognition of this outstanding NPS scholar who has educated hundreds of military officers and government civilians in space system engineering and whose scientific work has brought a far-reaching reputation to the university. Distinguished Professor Agrawal has turned his attention to adaptive optics during the past few years and a number of master's and doctoral students are currently being trained under his guidance in this exciting and high-visibility discipline."

"The Space Systems Academic Group [SSAG] is proud to have an AIAA Fellow as one of its valued members," agreed SSAG Chair Prof. Rudy Panholzer. "Distinguished Professor Agrawal is an outstanding researcher and dedicated teacher in our space program who enjoys a great reputation in his field locally, nationally and internationally. NPS is very fortunate to have a person like him on the faculty, and we wish him continued success in his professional career."

"This is a wonderful honor. Congratulations on this important recognition of your work and your many contributions to your field,” NPS Vice President for Information Resources and Chief Information Officer Christine Haska wrote to the new AIAA Fellow on learning of his election. "NPS is truly fortunate to have you."

As part of the honor, Agrawal will receive a certificate and pinning in a formal ceremony at the AIAA Fellows Dinner in Crystal City, Va., on May 12, and be recognized at the black-tie Aerospace Spotlight Awards Gala the next night at the Ronald Reagan International Trade Center in Washington, D.C.

"My wife is getting really excited about that," he said with a smile. "And so am I."

The new AIAA Fellow then paused, eyebrows raised ever so slightly, before adding, "I've never been in black tie."

Agrawal received his Master of Science at McMaster University in 1964, and his Ph.D. at Syracuse University in 1970. He is the author of the first textbook on spacecraft design, Design of Geosynchronous Spacecraft, as well as over 135 published peer-reviewed articles, and was awarded a design patent for an attitude pointing error correction system widely used for COMSAT operations in inclined orbits. Agrawal is currently completing a second book on spacecraft attitude control which is planned for publication next year.

For 20 years before joining the academic world, between 1969 and 1989 Agrawal worked for the Communications Satellite Corporation (COMSAT) and the International Telecommunications Satellite Organization (INTELSAT), where he did research in spacecraft attitude control, structures and testing. During that period he participated in the development of the INTELSAT IV, IV-A, V and VI, COMSTAR and MARISAT satellites.