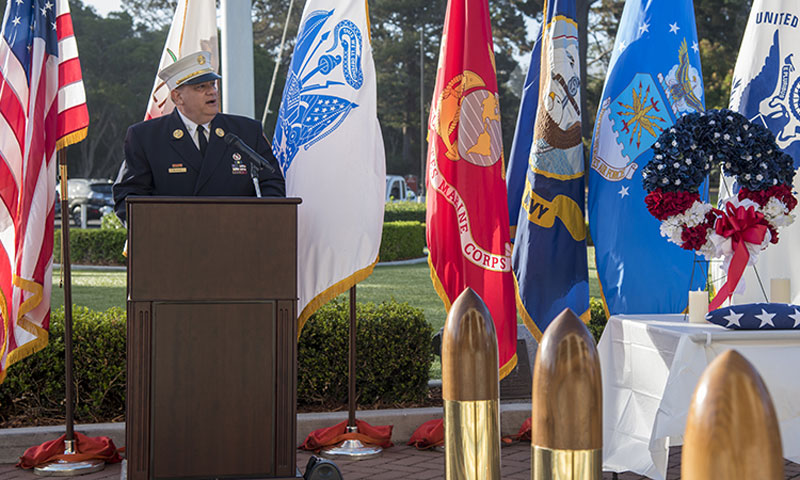 Deputy Chief Richard Blatus, a 38-year veteran of the New York Fire Department and an NPS Center for Homeland Defense and Security graduate, encourages attendees to ‘Never Forget’ during an early morning 9/11 Remembrance Ceremony on the NPS campus.

Blatus, a 38-year veteran of FDNY and an NPS alumnus through its Center for Homeland Defense and Security, spoke candidly about his experience as a first responder working at the FDNY headquarters just minutes away from the World Trade Center.

“I often reflect on the day, and remember the things that will remain with me forever,” Blatus recounted. “I remember the moment we recovered our leader, our chief, having been killed at the command post. I recall Capt. Jay Jonas calling out on the radio asking for assistance as he was trapped in stairwell B of the North Tower with his crew. And I remember my friend, a Deputy Chief, telling me my best friend had perished in the initial collapse.”

Blatus arrived at the World Trade Center about an hour after the collapse of the North Tower, in late to work that day because he had to take his daughter to a doctor’s appointment first thing in the morning.

“The scene was eerily quiet as most of the command staff had perished, and the remaining chief officers were struggling to regroup and find surviving fire fighters,” Blatus described. “We were fire fighters and first responders who had never witnessed such devastation. We were confused, but determined.

“Day turned into night and our searches continued while reinforcements from around the area began to arrive. By noon the next day, I was back in headquarters working alongside the remaining staff to help get our department back on its feet,” he continued. “Throughout the next couple of weeks, most of us split our time working at headquarters during the day and the World Trade Center site at night, working overnight to recover our missing comrades.”

Blatus continued his remarks by recognizing the men and women in attendance, service members and first responders who continue to reflect those qualities of determination and vigilance.

“Looking out this morning I see people who are here to make a difference,” he said. “You have been tasked to continue our vigilance. You are the next generation of homeland security professionals who will continue to develop new and innovative strategies to keep us safe. You will work hard to make sure our citizens continue to enjoy the benefit and liberties of our great nation.”

Although now 17 years separated from the tragedies of 9/11, Blatus said, the importance of reflection, honoring the sacrifices of the men and women who work to keep our nation safe, could not be more critical.

“When you visit New York today, and see a fire apparatus responding to an incident, you will see a phrase on every truck, ‘Never Forget.’ It is a phrase displayed throughout our department that our nation still stands tall. On this day, I give thanks to members of our Armed Forces who stand guard over our nation to preserve our way of life,” he said.

A 2008 graduate of NPS’ Center for Homeland Defense and Security, Blatus continues to advance through the largest municipal fire department in the nation. In fact, when he returns to New York later this week, Blatus will be promoted to Deputy Assistant Chief, one of 16 executive staff positions in the department.