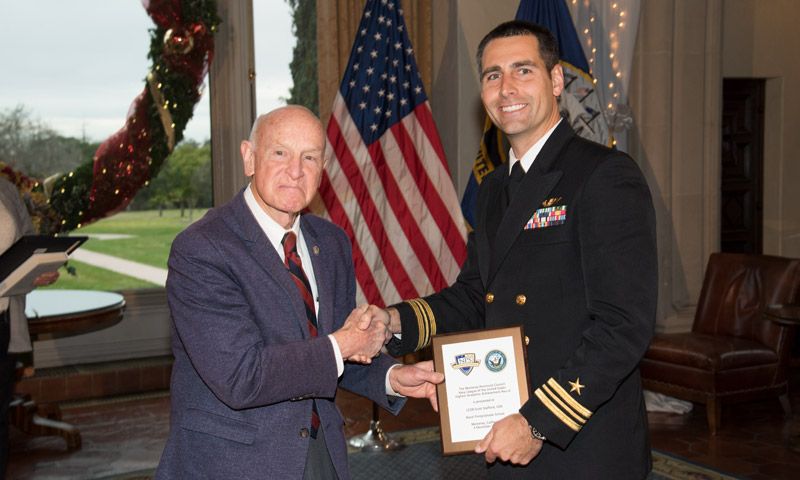 The Navy League Award is achieved through outstanding academic performance, pre-eminent thesis research, motivation, and the ability to possess the qualifications of a leader.

“It is an award for essentially being well-rounded,” said Stafford. “It includes several areas from community involvement, to your thesis, to general military bearing. This isn’t just about getting the best grade in class but representing your service and showing you are involved in more aspects then a single one.”

A major influencer on his selection for the award was his thesis, which examined organized crime in Albania, in particular how its thriving cannabis market impacts its relationship with the European Union and NATO.

“I am a foreign area officer in training here and I was looking at the region in general, and my thesis advisor thought Albania might be an interesting topic,” said Stafford. "This led me down the path of looking into how corruption and organized crime have impacted the country’s ability to integrate in the region.”

During the fall of the Soviet Union’s Eastern Block, Albania reformed its constitution into its modern iteration in 1991. In 2014, the country officially applied for membership into the European Union, but is still waiting on official membership status.

“The biggest takeaway for me is how much of an impact such a small nation like Albania can have,” said Stafford. “They are extremely small both in population and size, but they are in a strategic location and they have a significant impact on how the rest of the Balkan area views the United States and our allies, so even though it is an important country, it can easily be ignored.”

“I think this thesis had a big impact on me winning the Navy League Award,” said Stafford. “I believe by exploring something that is under-researched allowed me to find out a lot of information that has been ignored or lost over time, and that is important. I think looking at that niche area really helped my thesis stand out against some of the others.”

The Navy League of the United States, founded in 1902 with the support of President Theodore Roosevelt, is a nonprofit civilian, educational and advocacy organization that supports America’s sea services.

“I think I won it because I made the right impression on someone and it is an honor to receive it.”