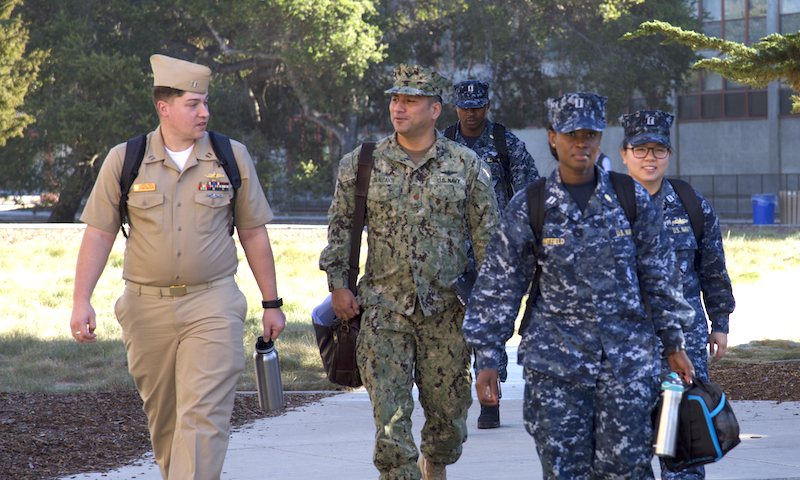 Thanks to the relatively quiet release of NAVADMIN 263/18 late last year, the Navy could be levying considerable changes to graduate education for unrestricted line officers looking ahead to major command.

The Navy released an administrative instruction in late 2018 that could bring with it considerable impact on graduate education in the service, and on the Naval Postgraduate School (NPS).

NAVADMIN 263/18 states that officers in unrestricted line (URL) communities must now be screened by administrative boards in order to attend in-residence graduate education programs, which they must complete to be eligible for taking major command starting with officers in year group 2015.

“I think there are advantages to being an in-resident graduate because you’re taken out of your operational environment for a specified period of time and you can just focus on your studies,” said Cmdr. Doug Jones, NPS Director of Programs. “You also have that time to develop those critical thinking skills and that will pay benefits when you’re in a major command because you’ll know how to analyze, access, critically think, and will develop characteristics that I think are desired at the major command level.”

The NAVADMIN makes a point to emphasize in-resident graduate education, as opposed to distance learning and hybrid programs, placing a high priority on critical thinking skills developed as a full-time graduate student in a dedicated academic environment.

“You’ll find that they will try and select the front-runners, best and brightest people early on to make sure they get that in-resident graduate education to groom them for major command at some point in their careers,” said Jones. “I think that’s going to impact the type of individual that gets screened to come to NPS.”

“These Sailors that will be required to complete the in-residence programs are still young and are only three years into their career,” said Capt. Edward McCabe, NPS Air Warfare Chair. “They still have some time to complete a new requirement that will affect them.”

In URL communities like aviation, McCabe says, young aviators will still be challenged by the pressure to remain in the cockpit gaining flight time, rather than in the classrooms of a university. While most agree the new instruction will lead to some level of change for NPS and other Navy graduate schools, the significance of that change and how long before the effects are seen are still up in the air. One thing that is for sure, however, is that the Navy is sending a message, loud and clear, on the importance of graduate education in its future leaders.