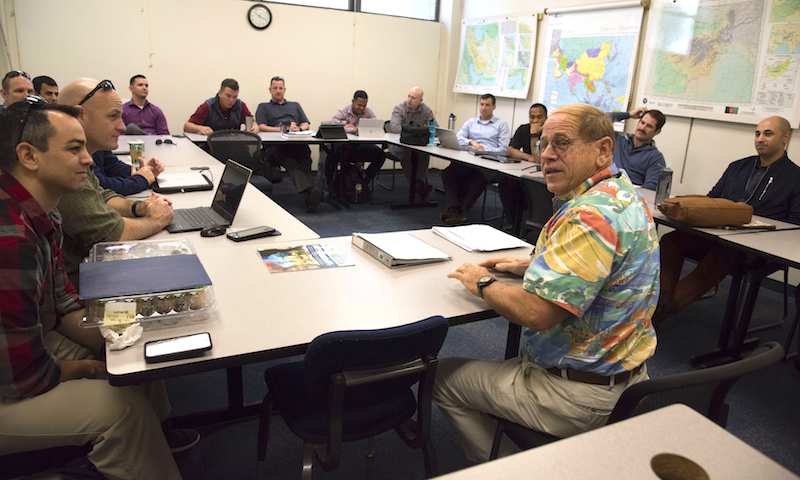 Naval War College (NWC) Monterey Professor Randall “Randy” Hess offers one of his final lectures on Joint Maritime Operations to a full class in Halligan Hall. Hess will soon retire after 18 years of service to the NWC Monterey program, and an additional 28 years as an officer in the U.S. Navy.

Prior to his tenure at the NWC program, Hess served on staff at NPS as the Dean of Students and Director of Programs, where he was instrumental in the design, creation and stand-up of the NWC at NPS program.

“I loved working at NPS,” said Hess. “I recall it being fondly referred to as the Hundred Acre Wood. For most of us that work on this little but beautiful base, we feel privileged to work here. I appreciate my colleagues at the Naval War College and NPS and will miss them. And the students are the best – hardworking, dedicated and smart. I will miss teaching them.”

Hess’ compliments were returned, as his students consistently rated him as an outstanding teacher who makes significant contributions to all aspects of the program. As he looks ahead, he hopes that he has left a lasting mark on those students, a mark that will benefit them as they continue on in service.

“I hope my students learned to think critically and ask the important questions,” he said. “They all will affect the future military in some way, from mentoring subordinates to even shaping policy, acquisition and doctrine as they promote into the senior ranks. They truly are our military’s future.

“Keep up the good work and keep caring for these students,” offered Hess as a final message to his fellow faculty and colleagues.

Prior to joining the NWC Monterey program, Hess served as a Navy officer for 28 years with assignments including squadron command, staff officer duties at Supreme Headquarters Allied Powers Europe, Command of the Naval Academy Preparatory School, and at NPS. As a naval aviator, he amassed thousands of flight hours in the E-2 Hawkeye, the C-130 Hercules, and the T-34 Mentor. Hess earned numerous awards for merit, and was recently recognized with a Department of the Navy Civilian Superior Service Award.

Hess plans to retire to the nearby Santa Cruz mountains with his wife, Rhonda, where they intend to spend more time with family and friends.