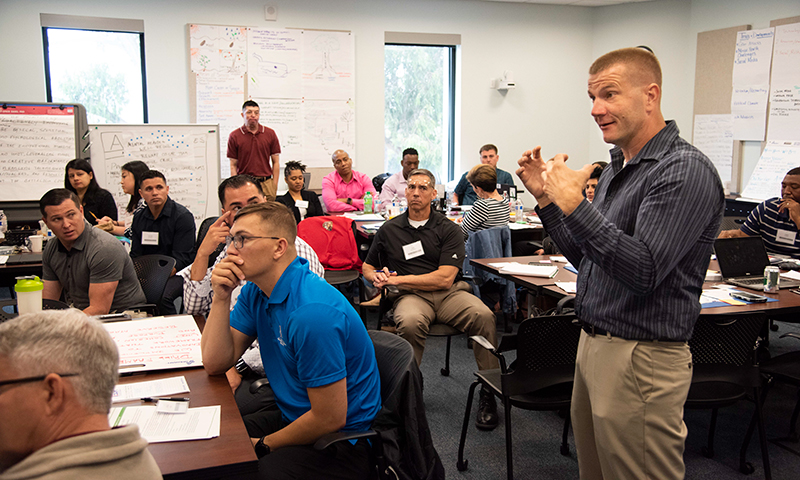 The 4th Marine Reserve Division (MARFORRES), headquartered in New Orleans, La., brought together a diverse cross-section of reservists, active duty and retired service members and spouses, and family services representatives from centers from around the nation, May 21-23, to take inventory of issues affecting the health and vitality of Marines.

Held on campus at the Naval Postgraduate School (NPS), the three-day Appreciative Inquiry Resilience Summit focused on using an organizational behavior model that emphasizes self-awareness and self-determined change. For the Marine Corps Reserve, leaders see the model, coined Appreciative Inquiry, as a way to develop mental resilience and toughness, and a means to ensuring the total health of the 40,000 Marines within MARFORRES.

Appreciative Inquiry (AI) focuses organizations, and individuals within them, to identify what is working well in the organization and why. The method asks what gives life to the organization at its best moments by using the power of positive questioning. The AI approach then uses a series of calibrated exercises designed to discover what critical actions need to be taken for a desired change.

The participants, like Marine Reservist Maj. Ryan Shaw, have been empowered by Marine Corps leadership to bring fresh perspectives and new ideas toward change in the Marine Corps.

“This is a specialized problem-framing program where we can get inputs about the problems of suicide, retention, and where we can rethink how to be proactive to improve the force in the future,” said Shaw.
“Participants will return to their commands with a renewed vigor on attacking these problems.”

NPS Professor Frank Barrett, who coauthored the Appreciative Inquiry method, met with representatives from across the U.S. about establishing methods to cause better health and resiliency within the Marine Corps. Barrett says it’s the, “power of the question” and how it is framed that provides positive and intuitive answers.

“Learning always begins with a moment of inquiry,” said Barrett. “Resilience builds on strong relationships, and on that positive core we can launch actions. The asking of questions already begins to transform and change the capacity of the human system we seek to understand.”

Barrett’s coauthor, NPS Professor Ned Powley, said the summit is a process to get people from their strengths to action without losing sight of the wholeness of the human system they are seeking to improve.

“We are brainstorming, prototyping, and pushing for change to better their commands today and in the long term,” said Powley.

Lt. Cmdr. Anna Keller, a clinical psychologist with the 4th Marine Division and a summit participant, said she wasn’t sure what to expect from the effort, but that she wanted to come out with a tangible product.

“With what we learned at the summit, we can now bring back to the division a prototype to begin creating resiliency in our Marines,” said Keller. “We have several prototypes we can test following some deep conversations about many uncomfortable things, like depression and suicide.”

The resiliency summit may have been an unfamiliar approach to many of the Marines, but as Keller noted, the activities created an energy of spurring ideas and lively debate about the larger issues affecting the health and well-being of the Marine Corps.

“My expectations have been wildly met ... We really came out of our comfort zone,” Keller said. “These activities activated our brains in a way that they usually don’t back in the 4th Marine Division, so it’s been very interesting.”