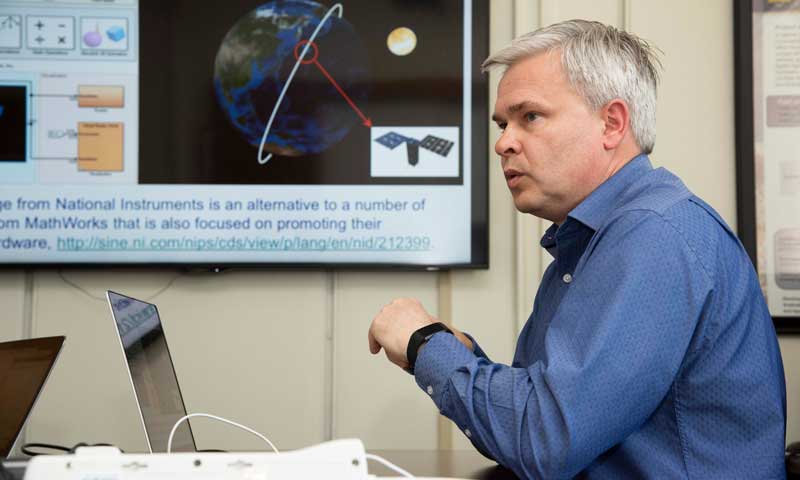 When the United States intelligence community recently recognized a critical need, the Naval Postgraduate School (NPS) assembled a team of multidisciplinary experts from across campus to rapidly address and meet this need.

“The course of instruction we delivered was a resounding success,” noted Dr. Jim Scrofani, the CMIS director. “We were able to take a complex set of educational requirements, create relevant courseware and laboratory experiments and deliver mission-impactful instructional outcomes.”

The initial group of students, who make acquisition decisions for overhead reconnaissance systems within the U.S. intelligence community, will directly apply the knowledge and skills gained in the course to satellite constellation design and spacecraft deployment.

The fact that the intelligence community implicitly trusted NPS to sponsor SmallSat University is no fluke.

CMIS maintains a contingent of professors in the National Capital Region (NCR) to interface directly with intelligence agencies large and small to best understand their needs. The National Reconnaissance Office (NRO), the National Geospatial-Intelligence Agency (NGA), the National Security Agency (NSA) and others all have a vested interest in the rapidly emerging field of small satellites to perform national security space missions.

“We have a longstanding Space Systems Engineering curriculum, as well as significant experience in designing, developing and operating small satellites for the Department of Defense,” Scrofani said. “NPS uniquely combines experienced professors, facilities, and knowledge of the sponsor’s technologies in order to deliver tailored courses for government professionals.”

The course launched April 23 in Washington, D.C. with a one-week familiarization with the enabling technologies of small satellites, as well as an introduction to System Tool Kit, a standard space mission design and visualization software package.

The students then traveled across the nation to Monterey, California, where they undertook an intense three-week study of small satellite design and development fundamentals with NPS’ Space Systems Academic Group (SSAG), including a week-long exploration of remote sensing techniques and small satellite autonomy.
Now armed with intimate understanding of these technologies, the students then returned to NCR for a final week of creating their own small satellite design program as a team, which they presented as a capstone project to management at their parent agency.

According to Scrofani, the sponsor’s reaction was astounding.

Scrofani noted, the sponsor – who requested anonymity due to security concerns – expressed gratitude for NPS’ work in creating SmallSat University.

“The briefing that was given today by the students far exceeded my expectations of a capstone presentation,” the sponsor said. “The briefing was superb and provided insight to the level of understanding that had been imparted to the students.

“Following the presentation, my management pulled me aside and stated to me their overwhelming approval of the course and the work that you put into it,” the sponsor continued. “They were incredibly impressed and look forward to seeing how we suggest altering this course for future offerings.”

Given the success of SmallSat University’s initial offering, Scrofani is already lining up the next round.

“The course is planned to be offered up to four times per year, as required by the education pipeline in the intelligence community,” he noted.