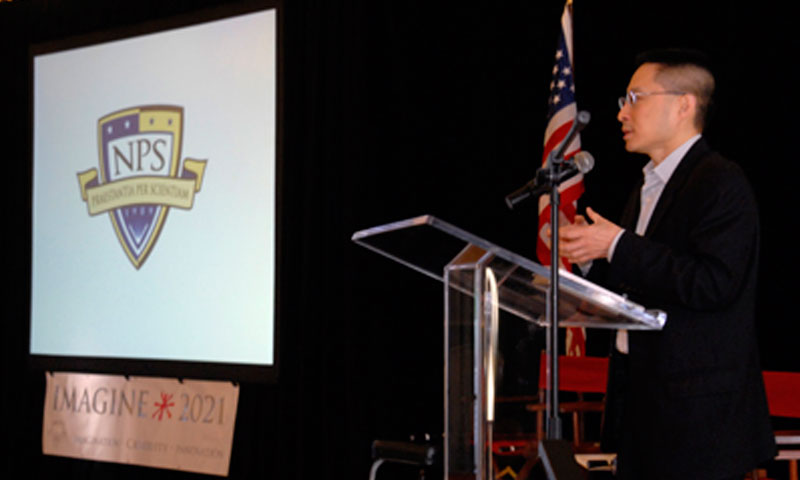 Speaker and Author Eric Liu opens an Imagination Conversation titled “Imagine a Safer Community 2021” in the Barbara McNitt Ballroom at NPS. The event brought together individuals from the public and private sector across the Monterey Peninsula to brainstorm ideas for imparting change in a community.

What does a safe community look and feel like? What happens in a community where there is trust among neighbors? These questions and many more were posed at the “Imagination Conversation” hosted by the Center for Homeland Defense and Security at the Naval Postgraduate School, Feb. 1. Event host Eric Liu is the author of “Guiding Lights: How to Mentor—and Find Life’s Purpose” and “Imagination First.” He travels the country encouraging groups from all walks of life to bring about change through imagination.

The workshop, held in the Barbara McNitt Ballroom on the NPS campus, followed the theme “Imagine a Safer Community 2021” and brought together participants from across the Peninsula to discuss how a united community can impart change through ‘applied imagination,’ and belief in what a secure community would look like.

“What if. To some, those are frivolous words, not suited for the cold, hard realities of the world. But you know better,” explained Liu in his introduction. “You know that in the wildly diverse community like Monterey – an ecosystem that includes fishermen and homeland security experts, artists and tourists, military linguists and oceanographers – imagination is the essential unifying ingredient.

“Imagination – the ability to conceive of what is not, the willingness to ask, ‘What if?’ – is vital to making the whole of a town like this greater than the sum of its parts. Communities that value imagination, that learn not to kill it, and that in fact figure out how to scale it—these are world-class communities. And you are here today because you can be a catalyst for that kind of imagination,” he continued.

The panelists engaged with each other and the audience in a large discussion about their individual roles in community accountability. Donohue spoke candidly about the impact that gang violence has on his community and his efforts to help Salinas residents “imagine a city without gangs,” a vision, he noted, that people often scoff at.

His hope is to create the kind of environment that fosters education and community service over fear and violence. Education was an overlying theme, and one that was made even more impactful by the number of Monterey High School students who were in attendance.

“Educating our young people is the cornerstone of Democracy,” added Kotowski.

Several participants and panelists noted the impact that education can have on keeping kids off of the streets and focused on a bright future. A future where communities can be focused “not on fixing things, but on accomplishing things,” Woodbury added.

Audience members from all walks of life added to the discussion, noting that a united community starts with individual neighborhoods feeling safe, and trusting one another.

“No matter what position we hold in our daily walks of life, we’re still all members of a community. It comes down to simple acts of knowing our neighbors,” said workshop attendee Horrace Allen. “I think about my own community, how many of us know more than just our next door neighbors? Neighbors one, two, three doors down?” 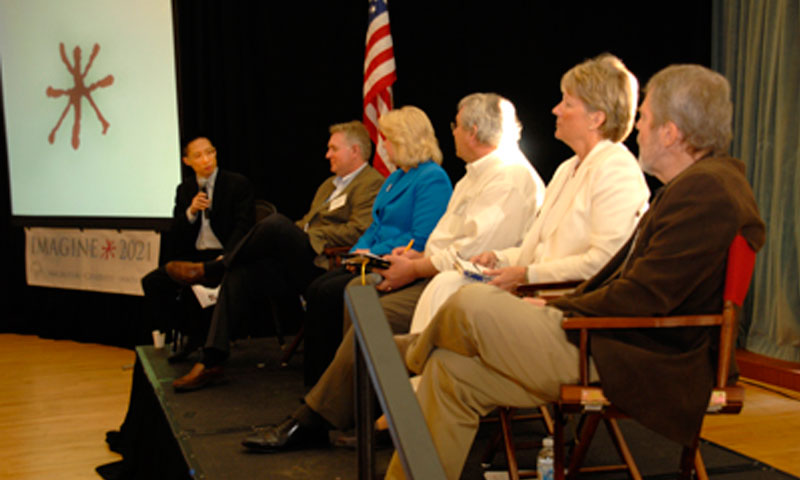 Liu also encouraged discussion around what one considers self-interest, and how an act of selflessness might actually be an investment in the community, and the safety of those residing there. Panelists echoed his sentiment with their own understanding of what it means to be part of a safe community.

“Until I am as concerned about my neighbors’ kids getting a good education as I am about my own healthcare, I won’t be an effective force for change,” said Lewis.

The tone of the workshop was overwhelmingly about bringing people together for a common goal. But the deeper lesson was to be open to all ideas and suggestions, rather than creating boundaries for what people can accomplish. Often the most effective ideas, Liu noted, are achieved when people have free reign to be creative.

Barich explained how she often takes a can of white spray paint and a broom on her morning walks to cover up graffiti and clean up the streets in an effort to take ownership of her neighborhood. “She who walks the neighborhood, owns the neighborhood,” said Barich. “The job of a safe neighborhood belongs to all of us.”

CHDS routinely brings together community, city, state and federal leaders and organizations to discuss homeland security efforts and what can be done to ensure a secure future for the nation. The center is committed to providing students with the most operationally-relevant homeland security and defense education.

Security experts from NPS have worked closely with Donohue and the Salinas Police Department over the past year to advise them on how to move forward in their war against gang violence. The discussion of security is an ongoing one at NPS, and each day brings new opportunities for change.

“It’s a simple act of knowing your neighbors,” added Allen. “That’s how my family and I can imagine a safer community before 2021. When my two kids were growing up, there were three words that they were raised with: having, doing and being. Having the courage to succeed, doing more than was expected, and being a good example to those that shall follow.”