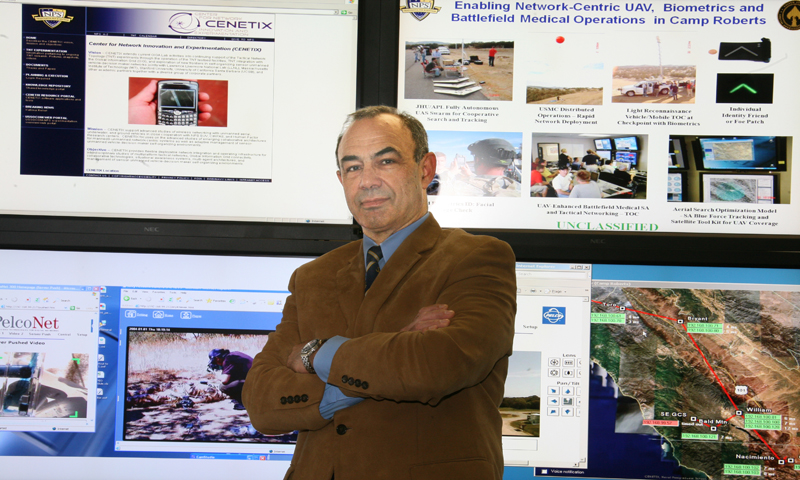 NPS Associate Professor Alex Bordetsky, pictured in the Center for Network Innovation and Experimentation (CENETIX) lab, was selected to receive a prestigious Fulbright Senior Scholar award, March 10. Bordetsky will use his Fulbright award to make in-roads into an exciting area of study that relies upon collaboration and networked labs to solve complex, satellite-based, information architecture and network challenges.

Bordetsky intends to use his Fulbright award to make in-roads into an exciting area of study that relies upon collaboration and networked labs to solve complex, satellite-based, information architecture and network challenges.  He is collaborating with the Technion, Israel Institute of Technology on a project that he believes has the potential to change the way large-scale, international experiments are conducted.

The idea is to create a “field site” that combines physical experiments, and robotic models in a physical-virtual lab. Scientists will be able to use the lab to collaborate over vast geographic spaces without the limitations imposed by more traditional laboratories and field sites. Bordetsky likens the proposed concept to a “lab-based social network.”

“Our general objective is to develop a unique distributed laboratory between NPS and Technion to allow for joint experimental studies in an emerging frontier – small, satellite-based, global, self-organizing mobile networks,” said Bordetsky.

“We intend to create an operational environment by combing actual field experiments and operations with unique simulators that are interacting with a virtual environment,” said Bordetsky. “The experimenters will be linked to institutions through which we can leverage combined capabilities to test cube and pico-satellites based information architectures.”

A robotic satellite formation network which is interconnected through the cyberspace of a distributed testbed and which incorporates operational “on-the-move” surface and land field assets, is an important aspect of what Bordetsky is trying to accomplish. He hopes that it, and similar efforts, will one day be used in a manner not unlike the sophisticated simulators used to train pilots and astronauts.

“Pilots are trained in simulator, but what is the difference between a simulator and a [flight simulation] game, the game is just software, but in the simulator you have to operate in and interact with an environment, why can’t we do that with field experimentation?” asked Bordetsky.

Bordetsky hopes that all of this will eventually lead to increased communications and information sharing for operators on the ground, particularly those without access to or who are precluded from, operating within, traditional networks structures.

“Operators on-the-move need novel orbital information networking architectures, which they can control and use as orbital extensions of their mobile, self-organizing networks, in order to upload, download, and manage information over discrete moments in time and space, ” said Bordetsky.

The announcement of Bordetsky’s award was made by the J. William Fulbright Foreign Scholarship Board (FSB). The 12-member president appointed board allocates congressionally appropriated funds along with donor funds from partner countries and the private sector.

In a letter to Bordetsky, FSB Chairmen Tom Healey wrote that, “As a Fulbright grantee, you will join the ranks of distinguished participants in the Program … Fulbrighters enrich the educational, political, economic, social and cultural lives of countries around the world.”

According to Healy, since the Fulbright program’s inception more than 60 years ago, some 300,000 Fulbright alumni have become, amongst other things, heads of state, judges, ambassadors and cabinet ministers and have been awarded 43 Nobel Prizes.

For Bordetsky, whose passion for ad hoc networks and advanced communications architectures is infections, the Fulbright award is an opportunity to expand the possible and to collaborate internationally with some of the world’s leading technology thinkers.