Int’l Crisis Negotiation Exercise Draws Students from Across the Region

Int’l Crisis Negotiation Exercise Draws Students from Across the Region 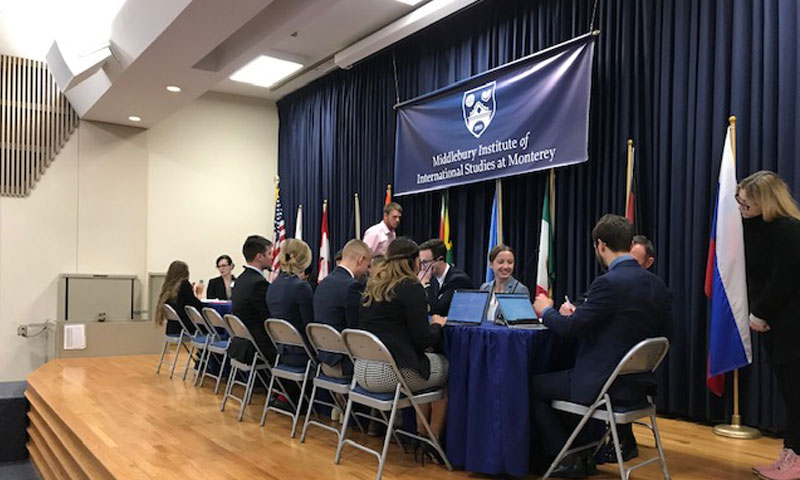 Students from the Naval Postgraduate School (NPS), the Middlebury Institute of International Studies (MIIS), and four other regional academic institutions took an opportunity to refine their skills in the art of diplomacy during the U.S. Army War College-sponsored International Strategic Crisis Negotiation Exercise (ISCNE) held on the MIIS campus in March.

“The purpose of ISCNE is to expose students to the challenges of conducting crisis diplomacy in a real-world global scenario,” said U.S. Army Col. John Zavage, Foreign Area Officer Chair in NPS’ National Security Affairs (NSA) Department. “The students received a lengthy packet of reading material on real world history, and based on that material, they wrote a hypothetical crisis scenario. Then, the seven teams formed a hypothetical negotiation conference, and we asked them to resolve the crisis.”

In addition to the research and preparation guided by the Army War College’s Center for Strategic Leadership, the teams were mentored by subject matter experts, including current and former Foreign Service Officers, and faculty from NPS, MIIS, San Jose State University, and the U.S. Army War College.

“The exercise benefits students involved in either international or regional affairs,” said Zavage. “It exposed everybody to the challenges of trying to advocate for their nation's national security interests while considering the national security interests of their partners and adversaries. It gave them an idea of how hard it is to reach an agreement with a United Nations-level problem.”

Even though this was a simulation, students experienced first-hand the challenge of crisis negotiations.

“The first challenge was the pace of the negotiations,” said U.S. Air Force Maj. Brandon Horii, an NPS student studying Far East Regional Security Studies. “The nature of the exercise forced the team to divide up so we could negotiate with other teams simultaneously. It made for a fast-paced dynamic environment that was a lot of fun, and reinforced the importance of team-building and developing a group narrative to reach unified team objectives.”

Horii said that the experience has helped him identify what areas he needs to emphasize more as he finishes his studies at NPS.

“The ISCNE exercise helped me realize the value of the time we are given at NPS to critically think about the topics we study,” said Horii. “It has given me a great opportunity to learn from experts and take the time to think more deeply about security affairs. It also built my confidence for when I return to an operational job.”

“For NPS students to partner with MIIS and with other students from local universities is just fantastic,” added Zavage. “We appreciate getting more diverse viewpoints when we work with students from around world and all over the country. In the end, different viewpoints mean different ways to approach and understand a problem.”