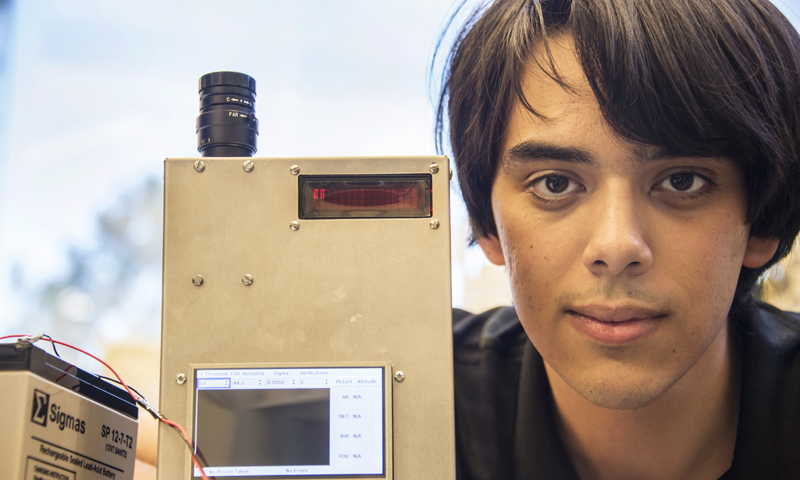 Naval Postgraduate School (NPS) student Intern Julian Brown is just 21 years old, but don’t let his young age and boyish charm fool you. He is a serious scientist and is working to build a star tracking system at NPS designed to help very small satellites determine their orientation in space.

After graduating from MIT with a degree in electrical engineering and computer science, and then interning with the Space and Naval Warfare Systems Command (SPAWAR), Brown began working for NPS Professor Jim Newman through the Naval Research Enterprise Internship Program (NREIP).

“As I was reviewing resumes for the summer of 2014, his stood out,” said Newman. “He had shown interest in trying to do some really hard projects. Professor Mathias Kolsch and I had been working part-time, with students, on developing a low-cost, very small star tracker to challenge the price point that industry currently provides, and I realized this would be a great project for Julian.”

“It’s cool stuff,” Brown noted. “I’ve known what I wanted to do since I was 5 years old. When I learned that the Navy was sponsoring students to come and work in their labs, it was so amazing to me. I couldn’t believe that they would give me money to play around with all of their cool toys,” he added with his usual zeal.

“A star tracker is used to take a picture of the sky and identify the patterns of stars in an image. Based on this, a satellite can tell which direction it is facing. Because stars are little specks of light that don’t move, it is very easy to know where you are looking if you know which stars you are looking at,” explained Brown.

Star trackers have been used in various forms since ancient times. The sextants used by ancient mariners are an example of early star tracker technology. And though the star tracker developed by Brown is far more complex than a mariner’s sextant, it is similarly designed to tell an operator where his craft is relative to the stars in the sky.

“When taking pictures of the stars for general navigation, there are many systems that provide coarse attitude information offering accuracy down to a tenth of a degree, but if you want accuracy down to arc seconds, 1/3600th of a degree, then you need to use a star tracker,” explained Brown. “They offer the highest accuracy pointing that you can get in space. They are very valuable for a lot of different missions and we would like to make them accessible to research groups like the one here at NPS.”

Star trackers are currently employed by most large commercial satellites, but they are generally too large and too costly to be employed aboard small satellites.

“They are also really expensive. A good model will cost hundreds of thousands of dollars and installing a single star tracker on a nano-satellite would wipeout a significant portion of your total satellite budget,” said Brown.

According to Newman, school and university budgets for nano-satellites usually cap out between $50,000 to $100,000, whereas government sponsored satellite budgets range from anywhere between $100,000 to $3,000,000.

“We want to create much cheaper star trackers and put them on satellites that would not normally be able to afford them due to budgetary constraints,” Brown noted.

Newman and his colleagues got Brown started on an appropriate algorithm and purchased the necessary hardware to advance the project, but Brown was thwarted by the realization that there was not an algorithm available that was strong enough to work in conjunction with the off-the-shelf parts that he was using.

“I ran an algorithm on a Beagle-Bone Microcomputer, but it ran very slowly. I wanted something that could run continuously so I rewrote the algorithm making it about a thousand times faster,” said Brown. “I knew that once I had a good algorithm written that the hardware wouldn’t matter as much so I devoted a lot of time to getting it right.”

And Brown’s algorithm not only had to work when applied to inexpensive off-the-shelf parts, it had to be “independent to the first order.”

“If you see a fist, you know roughly how big it is because you have seen a fist before. But if you had only one eye, like a star tracker, you wouldn’t know if the fist was close or faraway, except that when it got closer, you would not be able to see as far around it.

“Similarly, when you see pictures of the earth, you are seeing about half of it. When you are really close in, you cannot see as much of it. That’s a second order affect. To the first order, the fist looks the same. It’s just scaled bigger. But with second order effects, you can see around the fist,” Brown explained. “A non-dimensional algorithm is independent to the first order, which means you remove the scale factor. If you have a shape, say a triangle, it should look the same whether it’s small or large.”

All of this matters because there are a lot of things that can go wrong during a satellite launch and when a satellite is released into space, there is rarely an opportunity for a do-over.

“[During a launch] the shaking of the rocket can dislodge a lens or cause it to change position. If the lens is moved closer, [and your algorithm is not independent to the first order], it can make everything look bigger or smaller depending upon its location, which can throw off all of your calibrations, especially when measuring the distance between stars.

“But by taking the ratios between stars, you get shapes and not just lengths, which allows you to make an algorithm that does not rely upon the calibration of your equipment. It will still work even if things get moved around,” said Brown.

Brown’s work comes on the heels of increased research interest in satellite technology and greater industry and academic reliance on the information gleaned from commercial satellites.

“Because satellites are becoming so popular in research, we would like to develop our own non-private star tracker that we can build ourselves and hopefully pass off to private industry once we have designed the basics,” said Brown.

Newman agrees. His goal is to develop a government-owned, government-shared star tracker whose technology can be transferred to industry and spur motivation to improve the existing star trackers on the market.