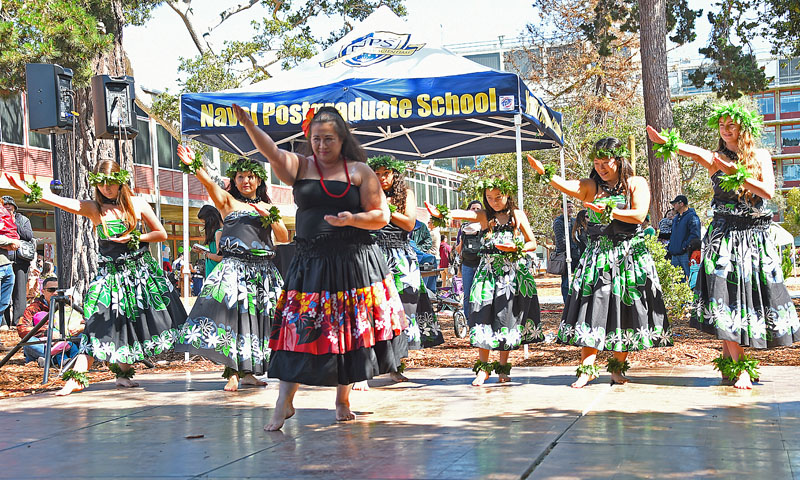 Hula-Yamamoto Hula Ohana performs at the Naval Postgraduate School’s International Day, April 25. Organized by the university’s International Executive Committee (IEC), NPS opened its doors to an estimated 4,000 guests to showcase the more than 40 countries that are represented within its student body.

An estimated 4,000-plus guests attended NPS’ International Day celebration, April 25. Organized by the university’s International Executive Committee (IEC), NPS opens its doors to the local community to showcase the more than 40 countries that are represented within its student body.

Hula-Yamamoto, pictured, was just one of several cultural presentations that were put on by members of the local community in an effort to share the many rich cultural traditions that make NPS and the Monterey Peninsula home.

“International Day provides the countries represented at NPS the ability to showcase their pride for their homeland, and the cultural diversity in terms of food, music, art, history and experience that each student brings to the NPS community,” said U.S. co-chair for the IEC, Lt. David Andre.

“In addition, it brings together the local civilian communities, all branches of the military services, and the international community to mingle and develop personal relationships that will last a lifetime,” he added.

National Security Affairs student German Army Lt. Col. Michael Hanisch feels there is much to learn at NPS outside of the classroom.

“Studying at NPS has so many benefits,” said Hanisch. “Workwise, it gives me the unique opportunity to work at a prestigious educational institution on topics and issues that move and influence current thinking and politics.

“Above that, I am convinced one of the biggest benefits of studying at NPS is to connect with students not only from the United States, but also from many other different states, all around the globe. This helps to better understand each other and to link our nations and armies,” Hanisch added.

Maj. YokeMou Jackson Pang of the Singapore Navy also spoke about the value of building relationships with U.S. and international officers while attending NPS.

“NPS is distinct in that a large proportion of the student population comprises military personnel and employees of defense ministries from all over the world,” said Pang. “There is a tremendous amount of knowledge that can be gleaned through casual chats with fellow students, while the academic courses are taught by knowledgeable world-class faculty members, most of whom are also involved in academic research and advisory work.”

According to Kim Andersen from the International Graduate Programs Office, this year’s event was an unprecedented success, with ticket sales exceeding $25,000. Proceeds from International Day fund several events for visiting officers and their families throughout the year.