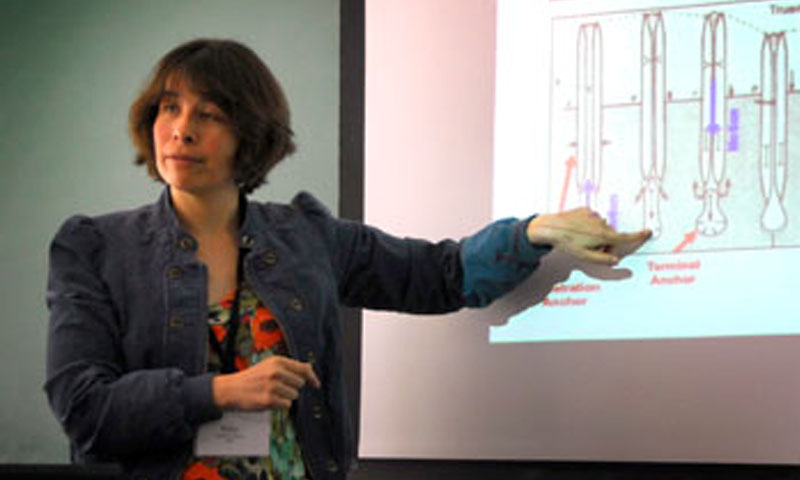 Anette “Peko” Hosoi, associate professor in the Department of Mechanical Engineering at MIT, describes the anatomy of a clam during the 9th International Symposium on Technology and the Mine Problem at NPS. Hosoi has been working on creating small robots that use the same mechanics that the clam uses to dig itself into the sand. The RoboClam offers a look at the potential future of demining technology, acting as an anchor to place charges in demining missions.

As far back as the Civil War, there is record of mines being used in battle. Of course, with the development of these powerful explosives also came the development of tools to eliminate the threat as safely as possible.  Today, technology has allowed for the creation of far more dangerous mines on land and sea, requiring even more advanced demining tools.

Once again, NPS has responded to the ever-changing threat of mine technologies, hosting the 9th International Symposium on Technology and the Mine Problem from May 17-20. The symposium, sponsored by several U.S. government agencies including OPNAV (N85), the Program Executive Officer for Littoral and Mine Warfare, the Office of Naval Research, Mine Warfare Association, the Naval Postgraduate School, and the Commander Naval Mine and ASW Command, brought military, government and relevant personnel from around the world to share concerns about the land and sea mine problem in an unclassified forum.

The three day event featured distinguished speakers and smaller breakout groups on various topics including “Buried Mine Identification Technologies for Maritime Homeland Defense,” change detection, autonomous ship hull inspection and unmanned systems. A major portion of the symposium looked at the potential of unmanned systems to aid in demining, and the future technologies that will make sea mine warfare easier to counter.

Cmdr. Keith Gordon represented the CNO Strategic Studies Group, presenting the findings of a study conducted last year on the importance of unmanned systems for the Navy. The finding, mirroring that of a study also done by the RAND Corporation and presented by Dr. Robert Button, was that it is imperative for the Navy to develop unmanned system capabilities. The different areas of applicability for the systems were explained in a number of sessions throughout the symposium.

Dr. Lora Weiss, Chief Technology Officer for the Georgia Tech Research Institute, lead a group looking at “Unmanned Systems Controls.”  Doug Horner, Director of Unmanned Systems Lab at NPS oversaw a session titled “Autonomy with Collaborative Unmanned Systems.” A session on “Unique Unmanned Systems,” lead by Dr. James Bellingham of the Monterey Bay Aquarium Research Institute, highlighted the developments being made in remote sailboats, wave-powered gliders and surface boats. Each application represented at the symposium offered a look at the future of the Navy’s unmanned systems capabilities, allowing for more efficient mine detection, deployment and safety.

“The difficulty here is that we all know the threat of mines is real, serious and likely to grow. Sea mines are perhaps the ultimate asymmetric threat. Cheap to make in most cases, relatively simple to deploy, and easy to ignore as a problem until you have a need to confront them or until something appears on the front page of the New York Times,” noted Dr. Daniel Goure, plenary speaker visiting from the Lexington Institute.

“So this is a real, stealth threat – in the political sense of the term as well as the technological operation sense of the term. But like IEDs [improvised explosive devices] were in the aftermath of the successful first days of Operation Iraqi Freedom, I believe that sea mines are lying in wait for the right situation. So it’s not a matter of if, but only when.” 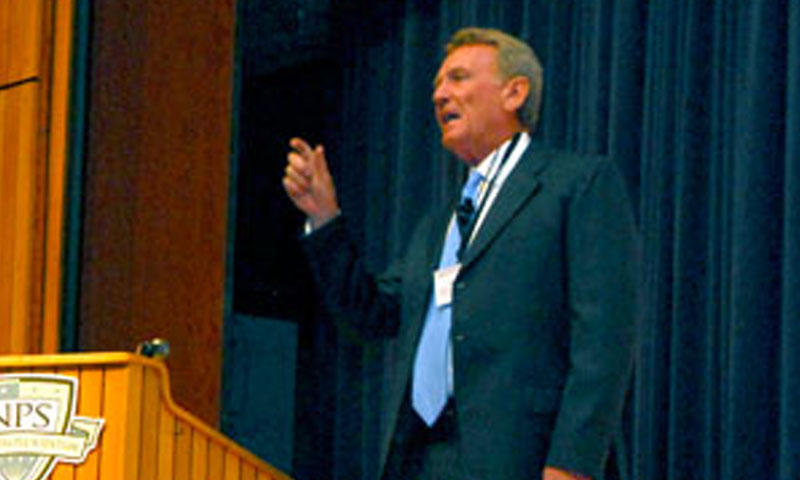 Keynote speaker and 1980 NPS graduate retired Adm. Harry Ulrich echoed the concern when he spoke about the importance of maritime security to our overall national defense. While the U.S. contributes to the removal of land and sea mines for our allies, we also have a vested interest in mine detection and removal technologies to ensure the safety of our citizens from attacks by sea. Enemies of both the U.S. and our allies have used transportation against citizens time and again, Ulrich noted, and there is no reason to believe that they wouldn’t use our waterways against us as well.

“It is a global issue that requires global thinking and global solutions,” said Ulrich. “Ninety percent of our cargo goes by sea. You can just imagine how dramatic the affects would be if we had to close down one or two of our major ports and the impact that would have on us not only psychologically but economically. Maritime security is real important. It is first and foremost what we do to protect our citizens from those who wish us ill from the sea.”

In addition to the threat of new mines being placed by enemies, the issue of unexploded ordnance left over in the sea from previous wars poses a real threat to maritime security. Sea mines, notorious for being effective during combat, are relatively simple to deploy and a monumental task to retrieve later.

Those areas where the mines are the most widely dispersed, such as the Baltic Sea, often don’t have the technology or the manpower to spend years searching for and destroying residual mines from past World Wars. This is where the symposium comes in, paying special attention to unmanned systems that can one day be available globally for a reasonable production cost.

“One historian … who specialized in this subject estimated that between 1945 and 1995, 500 ships were sunk worldwide by leftover World War I and World War II mines. Sounds like a real problem, yet is below the radar,” said Goure. “There was a NATO study done in 2009 that estimated there were 80,000 leftover mines still hanging around, floating around, chained-we hope- in the North Sea Channel in the Baltic. The seas are vast in one sense, but that’s an unbelievable number.”

Although international law declares that mine locations must be recorded when placed, many of the records from World War II were lost with the ships in battle. This leaves little record of the quantity and types of sea mines leftover, leaving experts with the task of both searching for mines and disarming them.

Discarded unexploded ordnance pose a threat not only to passing ships and submarines, but also to the underwater ecosystems. Chemicals leaking from WWII era mines have proven to be toxic, leaving small fishing communities with sick fish and chemical burns. These are just some of the problems that the mine symposium attendees face when they research ideas and solutions for the future.

In a panel titled “Biomimetic Robotics,” featured speakers offered a look at biologically inspired unmanned systems and technologies that might one day benefit sea mine placement and recovery. MIT professor Peko Hosoi explained how the anatomy and habits of clams are being studied to provide ideas for future underwater digging and anchoring technologies.

“The key idea behind bio-inspired designs is because biological organisms have had millions of years to evolve,” explained Hosoi. “Many of them have emerged on optimal ways to perform certain tasks. So as engineers, if we want to design something to perform similar tasks, it’s often useful to look to the biological solutions.”

The hope is to create a design that would allow for self-contained mobility and autonomy to place charges near mines in underwater demining missions. The issue of abandoned mines is a big one, noting the dangers they create for cargo ships and the environment. The job of having divers manually dismantling mines is equally dangerous, placing more emphasis on the need for machines that can safely and efficiently do the job. 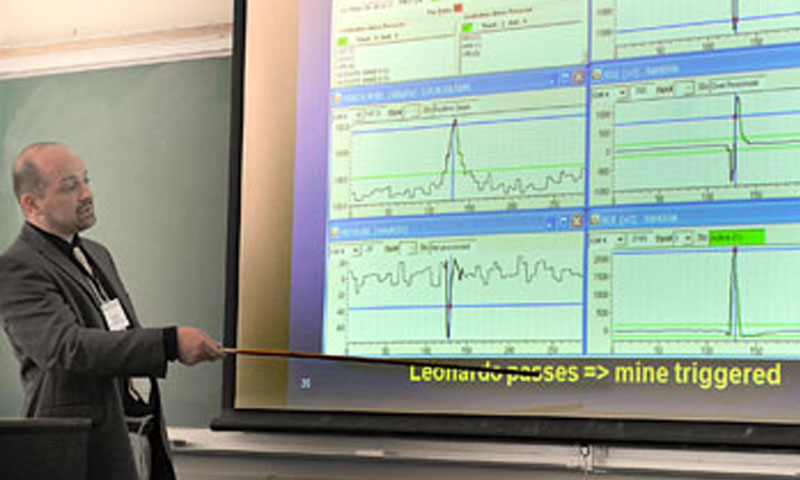 Enrique Coiras of the NATO Undersea Research Centre gives a presentation titled, “The Future of Autonomous Naval Mine Countermeasure Systems” at the 9th International Symposium on Technology and the Mine Problem. The symposium featured speakers and guests from around the world, gathering to share their expertise and ideas for the future of sea mine warfare and unmanned systems.

The reality of the global mine problem struck close to home when the experts discuss the toll that Improvised Explosive Devices (IEDs) take on U.S. troops in Iraq and Afghanistan. Anti-personnel and anti-tank mines are responsible for thousands of deaths per year, claiming lives of civilians and service men and women around the world. Although the majority of the conference focused on sea mines, the issue of discarded unexploded ordnances and IEDs is also a major problem on land, with entire villages uprooted in some places to avoid areas that are believed to contain land mines. The question of how many mines remain in any given area is rarely an easy one to answer, and the cost required to safely and efficiently locate and remove mines is one that most poor countries cannot afford.

Presenter Erik de Brun of Humanistic Robotics, Inc. spoke about the research being done in “Anti-Personnel Mine Clearance Roller Research, Testing and Design.”  He described the different methods of land mine detection, and the improvements being made on a WWII-era demining system known as a roller. Rollers are used for applying pressure evenly to the ground where mines are suspected, detonating them before an unsuspecting convoy or civilian is injured.

“Actually doing the mining work in the military and humanitarian areas is quite a time consuming task. And it takes a lot of resources, a lot of money, and it can be very intensive,” explained de Brun.  “There are many different techniques, many different tools that come into play. Going back to World War II, we really haven’t updated rollers. We haven’t changed much and it’s sort of an area that we feel is untapped at this point. So why aren’t they being used very often? They really aren’t understood that well.”

Part of the reason is that during WWII, rollers were often thrown together using tires and weights, causing many to question whether such a simple design can be as efficient as other methods.  However, de Brun and his team hope that their paddlewheel design will improve reliability and offer a cost-efficient solution for regions plagued by expansive mine fields.

“The land mine problem is pretty well known. Not just the anti-personnel mines but also anti-tank mines and other explosive hazards,” noted de Brun. “There are mines all over the world, almost 100 countries are affected by this problem … Thousands of people are killed each year from coming into contact with land mines. It’s a huge humanitarian issue. It’s also a huge military issue.”

Despite the emphasis of the symposium on sea mines over land mines, the consensus from many presenters was that we must still practice vigilance on both fronts. Every day our troops around the world face the dangers of IEDs, underwater unexploded ordinances and the ever-changing tactics of enemies, pushing our experts to figure out new ways to keep them safe. NPS’ contribution to mine  technologies, and the Annual Symposium on Technology and the Mine Problem are instrumental in bringing the issue to the forefront and ensuring the safety of our citizens, our soldiers, and our allies.