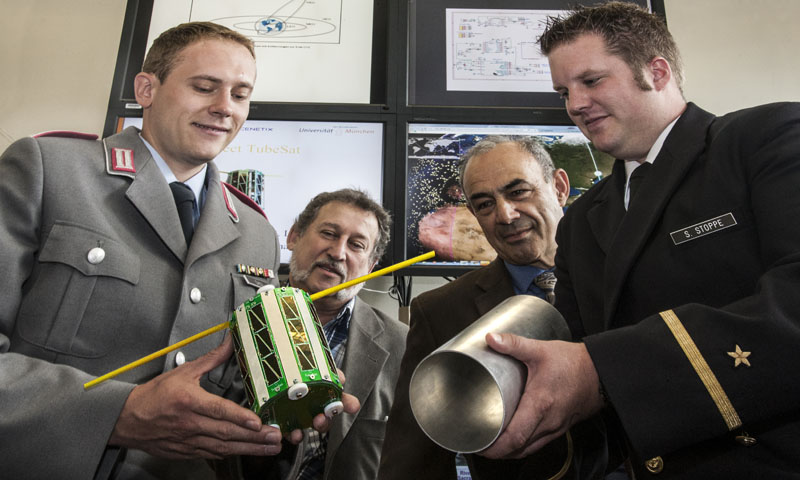 A pair of Naval Postgraduate School (NPS) international exchange students from the University of Bundeswehr say they are the first to have ever successfully built an operational InterOrbital Systems Tube Satellite (TubeSat).

“The big output of this project was a proof-of concept using immature kits to develop the tube satellites,” said Bordetsky.

“This project is a great example of where a craft with limited capabilities can create an unlimited source of research and development tasks that are extremely valuable to our students,” added Bourakov.

The kits themselves cost about $8,000. According to their manufacturer, successful assembly includes a guaranteed launch into low-Earth orbit on an Interorbital Neptune modular rocket. Designers intend to launch the first 36 TubeSats completed to standard at a date to be determined.

The kits are fairly basic, they include printed circuit boards, a battery pack, solar cells, a power management control system, microcomputer, software, antennas, a power switch and an instruction booklet.

Stoppe and Ohst had to contend with a host of challenges before finally assembling the satellite. They noted a series of design challenges and the need to adjust schematics rewrite files and make adjustments to voltage, circuit board design and solar panels.

But, by applying their previous electrical engineering skills and collaborating with the experts at the CENETIX lab and NPS’ Space Systems Academic Group (SSAG), Ohst and Stoppe were able to do everything from recreate circuits boards to recalculate resistor values.

“We had to develop the rings, configuration and layout … We even used a 3-D printer to produce some of the parts that made this possible,” added Stoppe. “Without our background in electrical engineering, we would not have been able to complete this project,” said Ohst.

“What made this an actual functional satellite is the injection of their and Eugene [Bourakov’s] talent while incorporating 3-D printing technology … You have a seemingly simple thing, but it is actually the product of a highly-educated group of engineers,” said Bordetsky.

The completion of the satellite is big news for researchers at CENETIX who now hope to be able to use TubeSats in their continuing ad hoc networking and Maritime Interdiction Operation (MIO) experiments.

“With this completed TubeSat we can now incorporate the TubeSats into our MIO testbed,” said Bordetsky. “This satellite, by virtue of being perishable, allows us to study how we bring these new network nodes into orbit without wasting expensive satellites.”

As Ohst and Stoppe worked against the clock to complete their satellite, they received input from satellite enthusiasts from around the world. They are part of an on-line special interest group devoted to the inter-Orbital Company’s TubeSat concept.

“We are getting a lot of requests for assistance after posting our results to the group,” said Ohst. “They are excited because we were the first to actually put it together.”

But Ohst and Stoppe are not just the first to assemble an operational kit, they were able to apply their engineering backgrounds toward improving the finished product.

“We even created a small area for a payload, a lot of things are possible, we can use this space to house a GPS, camera, or an orbiting gyroscope for example,” said Stoppe. “Now that a TubSat has been put together, those who come next can concentrate on payload development.”

Despite its surface simplicity, Bordetsky insists that the TubeSat is a functioning satellite and that Ohst and Stoppe’s work is a significant engineering achievement. Bordetsky is currently working on weighing the merits of different launch options, including the option of placing the TubeSat into low-Earth orbit by launching it from a fighter jet.

“Because it is so inexpensive [comparatively speaking], it is tempting to think about self-organizing networks in orbit working with ground networks … The problem is, how do we launch it? We are currently working on different launch options,” said Bordetsky. “[Including] launching by fighter jet or by surface and inflatable platforms.”

Bordetsky lauds the efforts of Stoppe and Ohst as illustrative of the advantages of the international collaboration that occurs between students and U.S. service members at NPS.

“This is a perfect example of the success of our collaborative efforts, two German officers building a satellite, built upon the work done by a Greek officer from the Hellenic Navy, achieving a break through at CENETIX,” said Bordetsky.

In the future Stoppe and Ohst hope to see their work continue through testing via stratospheric balloons, radio tests various payloads and the building of a second and third TubeSat.