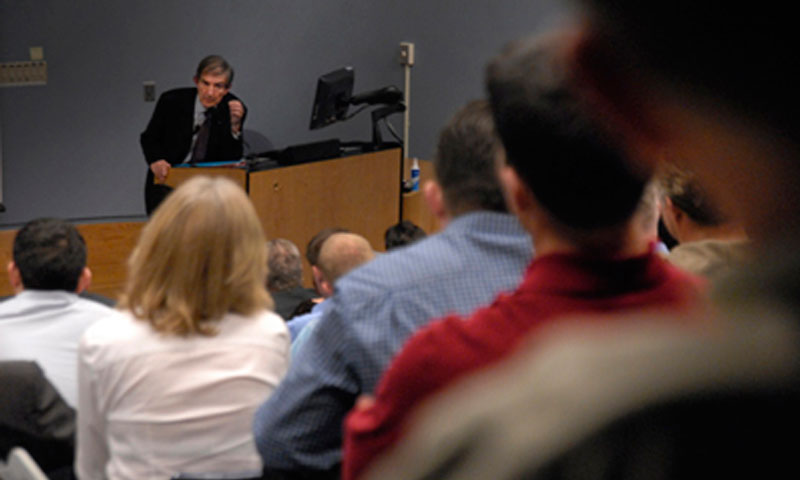 Counterterrorism expert and captor of the infamous Carlos the Jackal, Jean-Louis Bruguière lectures on the evolution of radical Islamic terrorism leading up to the 9/11 attacks during a Center for Homeland Defense and Security sponsored brownbag lunch session in the Glasgow auditorium at the Naval Postgraduate School (NPS), Jan. 26.

The terrorist attack on September 11th is widely recognized as one of the most impactful events of the 21st century, exposing the threat of radical Islamic terrorism to the western world. To many, the idea of using commercial airplanes as weapons of mass destruction was inconceivable, but to an internationally-known French terrorism expert, it was only a matter of time before it happened.

Recognized counterterrorism guru Jean-Louis Bruguière gave a lecture on the evolution of radical Islamic terrorism leading up to the 9/11 attacks and the methods of combating today’s threats during a Center for Homeland Defense and Security (CHDS) sponsored brownbag lunch session in the Glasgow auditorium at the Naval Postgraduate School (NPS), Jan. 26.

“It is an honor and a pleasure to be here and to address a very crucial issue,” said the distinguished judge. “The terrorist threat is a common threat not only for France or Europe or for the United States, but for the entire world.”

Judge Bruguière was the French leading magistrate for investigating counterterrorism, responsible for hundreds of important arrests and convictions including the infamous Carlos the Jackal. He was also appointed by the European Union to the U.S. Department of Treasury to oversee the Terrorist Finance Tracking Program.

With his more than 25 years of experience, the judge spoke about France’s long fight with radical Islam – including one of the most ominous events, the 1994 hijacking of an Air France Airbus. It was later discovered, Bruguière noted, that the intent of the terrorists was to crash the aircraft into the Eiffel tower had it not been retaken in a dramatic firefight in Marseille by French special forces. He called thee event a clear warning and precursor to the September 11 attacks.

Bruguière noted that, in France, they began to notice the evolution of terrorist cells and how they were becoming more sophisticated and independent of each other.

They followed patterns of income sources and document forging that lead them to prevent several attacks, including the foiling of a plot to set off a bomb at the Los Angeles Airport – now known as the millennium bombing. The effort led to the arrests of a number of terrorists from Ahmed Ressam’s terrorist group.

This and other events, Bruguière mentioned, gave him a hunch that an attack on the United States was eminent.

“I say this as a matter of fact … September 11 was not an accident of history or an unfortunate event. It was the result of a long and serious evolution,” said Bruguière. “They all used the same strategy but unfortunately no country took into account this new phenomenon that was in fact the forewarnings that should’ve helped us to anticipate what was coming after that.”

Today, Bruguière says, the threat is much more difficult to asses. Terrorist cells receive funding from non-governmental organizations (NGOs) and drug trafficking, they act in random ways, and they continue to morph into more sophisticated organizations that are increasingly independent of each other.

Bruguière mentioned, for example, the 2009 Christmas bomber that was trained in Yemen and, according to Bruguière, worked independently from Al-Qaeda.

Bruguière also warned about the lack of focus towards emerging networks and organizations such as the Somali Al-Shabaab organization.

“The Al-Shabaab problem is not only an internal problem, it is not a regional issue, it is a worldwide issue,” said Bruguière. “They are composed of members from 2,000 tribes and maybe up to 10 U.S. citizens.”

After the lecture, Bruguière answered questions from the attending faculty and students that took the opportunity to engage the renowned judge.

“One of the courses we teach at the center focuses exclusively internationally. We look at other countries’ policies, strategies and laws in dealing with terrorism and other homeland security threats, public health issues and other things,” said Comparative Government Professor Nadav Morag of CHDS. “The objective there is essentially two things – to learn from the lessons of other countries … [and] to also understand how they operate so we can design our own strategies. Homeland security threats generally come from overseas, if we don’t understand how other countries operate it’s very difficult to plan our own strategies.”