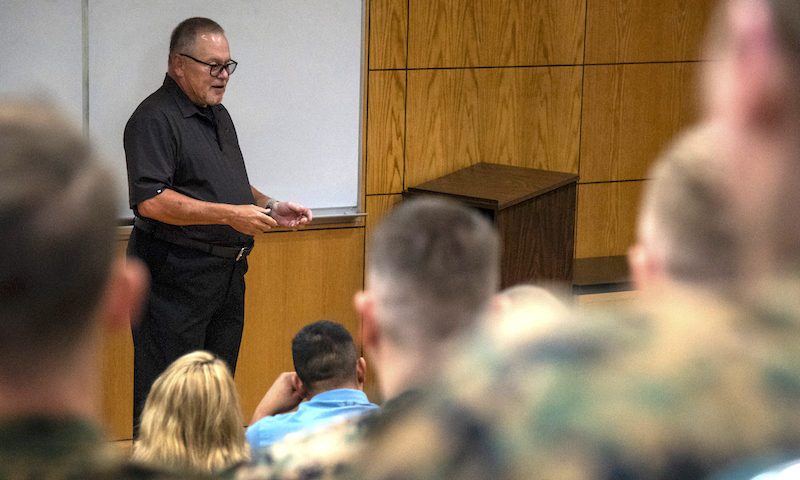 Bob Parsons, founder of the Internet domain registrar and Web hosting company GoDaddy, speaks to NPS Marine Corps students, Aug. 21. Parsons served as a rifleman in the Marine Corps during the Vietnam War, and sternly attributes much of his success to his military service.

The Naval Postgraduate School (NPS) welcomed Robert “Bob” Parsons, founder of the Internet domain registrar and Web-hosting company GoDaddy, to speak with university Marine Corps students, Aug. 21. Parsons served as a Marine rifleman during the Vietnam War, and openly attributes much of his success in business to his military service.

Parsons spoke about his academic woes as a child, how they carried on into high school, and the bleak outlook he once had on his future. That all changed the day he walked down to the local Marine Corps recruiting office after two friends talked him into going with them.

“That place was as sharp as it could be,” said Parsons.

The recruiter he spoke to was tall, fit and a smooth talker, Parsons said, so it was an easy choice for him. It was a decision that opened up what was a hidden path to him, with the Marine Corps instilling traits within him that helped him succeed during and after his active duty career.

“I would have never been able to do that without the Marine Corps,” he said.

“They taught me discipline in the sense that, when you have a commitment or a job to do, you do everything you possibly can to see that through,” Parsons continued. “They also taught me pride and to believe in myself, and that really made a difference for me.”

The rise of the personal computer caught Parsons’ interest, and during a 12-hour layover he bought a book about programming and basic computer language. He finished the book and wrote his first program on a cross-country flight back to Baltimore.

“I used an old terminal at work to test out the code, and after it worked, I kept trying to learn and do more with it,” Parsons stated. “Every chance I got, I would go down and use the terminal and study the book I bought.”

As personal computers began hitting the market, Parsons bought his own to take home and began writing more programs.

“The big difference between me and most of the other people who bought those computers is that they would also buy the software for it,” said Parsons. “I studied the architecture of the machine and would write the code for anything I wanted it to do. I kept doing this as different operating systems were coming out.”

Parsons used this new knowledge and ability to create new programs that he advertised in various ways and would eventually sell for profit. After several years of financial peaks and valleys, Parsons created the company GoDaddy in 1997. After years of fine-tuning the product, heavily investing, and a little bit of luck with the dotcom boom, GoDaddy has flourished into the multi-billion dollar enterprise it is today.

“All of this success I’ve been able to enjoy in my life would never have happened if it weren’t for the Marine Corps and the values they instilled in me all those years ago,” Parsons stressed.

In 2012, Parsons established the Bob and Renee Parsons Foundation with his spouse, which has been active supporters of the Semper Fi fund. Parsons served as a keynote presenter and auctioneer for the Naval Postgraduate School Foundation’s Annual America’s Heroes Charity Golf Tournament.