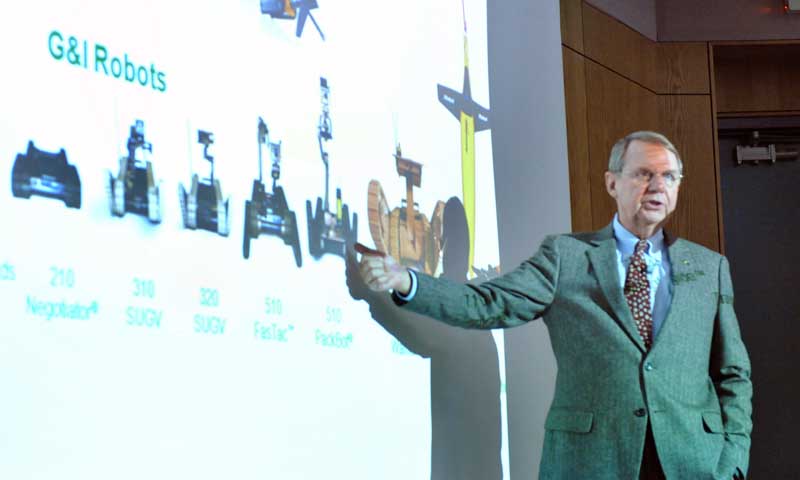 Joseph Dyer, discusses the many different kinds of robots develop through iRobot, and their applications in commercial and defense industries. Dyer joined iRobot in 2003 after a 32-year career with the Navy.

Dyer began at iRobot in 2003 after an extensive career with the Navy, during which time he received his master’s degree in Finance from NPS, and served as the commander of the Naval Air Systems Command and the Naval Air Warfare Center. After 32 years with the Navy, Dyer looked to continue to use his military and business experience in the private sector.

“I was looking for a company that in the year 2003 was similar to Apple in 1980. I wanted to be part of something that was really going to change our lives. And I’ll tell you that I’m really happy to have taken the path into robotics. And I would do it again, almost nine years later, if I had that opportunity.”

During his visit to NPS, Dyer spoke about the future of robotics, and its role in engineering, healthcare, housekeeping and defense. He also encouraged students to strive to be innovators in their field. The military has, in recent years, placed greater emphasis on using unmanned systems for a number of ‘dull, dirty, or dangerous’ tasks. Dyer noted that the emerging technology has found its place alongside what he calls ‘disruptive technologies.’

“Robotics is, I believe, a disruptive technology. It’s a fair question to ask, ‘what’s America’s next big industry?’ We did alright with automobiles and information technology and with aerospace,” Dyer explained. “What’s next? Well, there’s good hope I think that robotics and biogenetics are the best possible answers to those questions.”

“How do you recognize a disruptive technology?” he asked. “First of all, it’s interesting to note that there probably haven’t been that many of them. Certainly fire, the wheel, the alphabet, oil, automotive, telecom. [A disruptive technology] really is something that changes the way we live, changes the way we work, and the way we fight. It’s an important time, and an important opportunity for unmanned systems. Those of you who are working in unmanned systems have the opportunity to do great things … to help in survivability.” 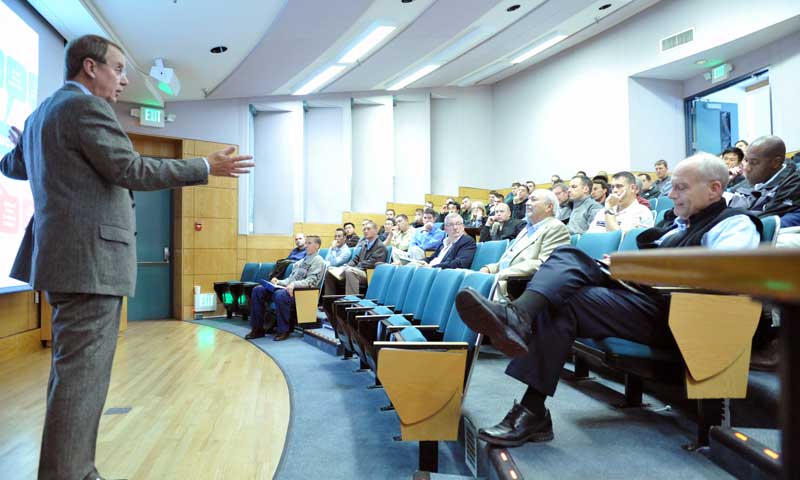 iRobot is known within the defense community for producing back-packable robots that aid warfighters in bomb detection and disposal. The devices have proven to save lives, and to demonstrate that, Dyer showed a photo of one that had been destroyed, presumably while conducting IED detection operations. He recalled the sense of pride in receiving a postcard from a soldier in Afghanistan with the message, “You saved lives today.”

Dyer explained that the technologies being developed at iRobot include one nicknamed the ‘ThrowBot.’ Essentially, the ThrowBot is small enough and portable enough to be used in a wide range of unknown or hostile environments. Its primary mission is to help soldiers gain situational awareness before they enter into potentially dangerous areas.

“Throwbot, essentially is … throw it in, have a look before you go in and increase your situational awareness and not only increase your survivability but also increase your tactical speed. Think about it for a minute. If we had to clear one of the buildings here of bad guys, we’d armor up and we’d be ready to fight at every intersection at every doorway at every stairway. That’s dangerous and slower. If the robot can go first, you’re able to say ‘nothing here, nothing here,’ quickly advance, and here we’ve got work to do.”

Dyer explained that while iRobot has been able to get many successful designs to the warfighter or commercial users, engineers and developers should be aware of what he called the “valley of death.” Dyer cautioned that the road to getting great design concepts picked up by a large defense company is a long one, and not without significant hurdles. But he pointed to the growth of the unmanned systems field as evidence that they have a significant and undeniable role in the future of defense.