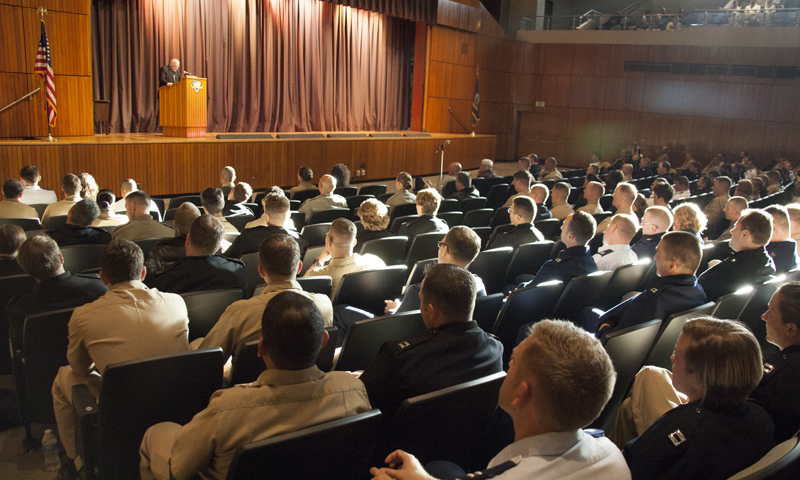 Acclaimed author, retired U.S. Marine Corps Lt. Col. James G. Zumwalt, addressed students, faculty and staff during the latest Secretary of the Navy Guest Lecture at the Naval Postgraduate School, Nov. 14. Zumwalt is the author of several books and head of a security-consulting firm named for his father, Adm. Elmo “Bud” Zumwalt, the youngest officer to serve as Chief of Naval Operations.

The audience listened for nearly an hour as Zumwalt shared his father’s legacy, revealing intimate moments from his father’s life eliciting both laughter and respectful silence from the packed crowd. Zumwalt’s often emotional speech revealed the humor, controversy and accomplishments that encompassed his father’s extraordinary career.

Zumwalt noted that former President Bill Clinton once called his father, “the Navy’s conscience.” This title was imparted due to the elder Zumwalt’s tireless efforts to buck tradition in favor of Sailors who had not always received equal opportunities. “He was a Sailor’s admiral,” said Zumwalt.

Zumwalt expressed particular pride when discussing his father’s efforts to end what he called, “the institutional racism” that was prevalent in the Vietnam era Navy. "My father once said, ‘I know my changes resulted in a long list of friends and a long list of enemies, I’m proud of them both,’” said Zumwalt.

Finally, Zumwalt discussed the Navy’s decision to name the Zumwalt Class of guided missile destroyers in his father’s honor. “When the DDG-1000 goes to sea next year, it will have two patron saints – Saint Elmo, and Saint Bud,” said Zumwalt.