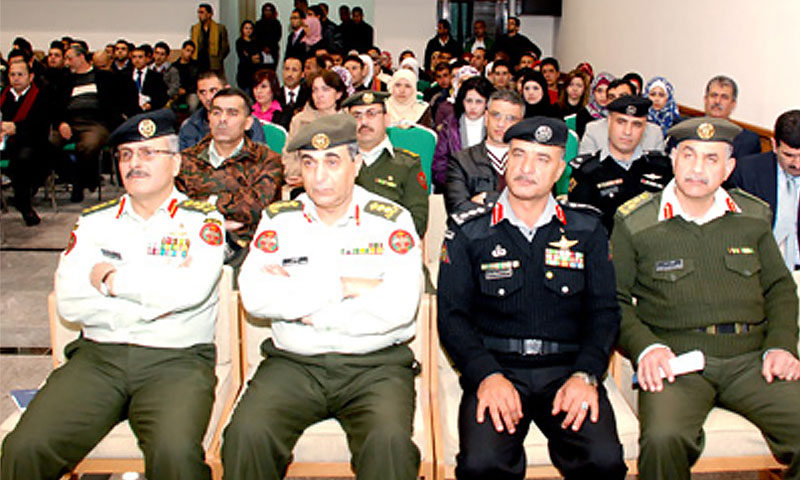 Attendees of a cybersecurity workshop at Yarmouk University in Jordan listen to the opening address by NPS Executive Vice President and Provost Leonard Ferrari. The workshop is just the beginning of what NPS and Jordanian leadership hope is an expanding partnership between the two nations.

In recent months, many North African and Middle Eastern countries, including U.S. allies, have experienced substantial unrest and internal conflict in a period that has become known as ‘Arab Spring.’ While there certainly is no single and simple solution to these extraordinary changes, for the country of Jordan, longtime U.S. ally and NPS alumnus King Al Abdullah, II, has relied on education, for both civilians and military, to give Jordanians a voice.

“Education is obviously central to the future,” said Abdullah. “It is an enabler, not only of productivity and success, but also, of responsible citizenship.”

Abdullah attended the Pembroke College at Oxford University and the Edmund A. Walsh School of Foreign Service at Georgetown University before taking courses through NPS’ Defense Resource Management Institute (DRMI) in 1998. He understands the value of not only a graduate education, but the importance of education in an international setting.

Since Abdullah’s time at NPS, the State Department has designated the university as the United States Partnership for Peace Training and Education Center  (USPTC) – the only in the country –giving NPS even more opportunities to partner with the Jordanian Armed Forces (JAF) and local universities in training and education.

"Historically at NPS, there are many examples of U.S. students sitting side by side with international students in an environment that creates a richness on both sides,” explains USPTC Program Director Tom Hazard. “There is not only the education exchange which occurs, but also experience exchange and cultural exchange. The more opportunities that we can find for academic interactions with militaries of other countries, as well as military civilians of other countries, the more value we provide for the overall mission of the school, and for the long term ‘partner capacity building’ objectives of both the DoD and the State Department."

As the USPTC, NPS offers support to NATO members and partner nations in their path to membership. Jordan is a partner nation in NATO’s Mediterranean Dialogue, which has created opportunities for the JAF to receive training through the NATO colleges as well, in topics like peace-keeping, arms control and civil-military operations.While NPS partnerships are a small part of Jordan’s educational initiatives, that role continues to grow, most recently when NPS Executive Vice President and Provost Dr. Leonard Ferrari signed two Letters of Accord (LoA), one with German-Jordanian University’s Talal Abu-Ghazaleh College of Business (TAG-CB), and the other with Yarmouk University (YU).

“In fostering these partnerships, we were hoping that Jordan would serve as a sort of hub for the Middle East,” explained Ferrari. “Right now, they educate military officers from a lot of Arab states. We are hoping that through our relationship with Jordan, we will see more students from the Arab states coming to the Naval Postgraduate School, allowing us to use education as a communication vehicle between nation states with cultural and political differences.”

Following the signing of the LoA, NPS Computer Science faculty member Scott Coté taught a three-day cybersecurity workshop for Jordanian and visiting military, looking at network vulnerabilities from the perspective of potential adversaries.

He noted that not only was the topic of cybersecurity important to help Jordanians secure their networks, but it also stresses the value of ethical behavior, and how to recognize unethical behavior in others. The workshop was the first of many proposed training opportunities where NPS faculty with expertise in relevant fields can offer support for the JAF and civilian university students.

Partnership efforts with Jordan are ongoing, thanks in part to DRMI’s Dr. Jomana Amara, who works closely with the JAF and the Embassy to establish new joint projects between NPS and Jordanian universities. She has been intimately involved in Jordanian relations for many years, and was awarded a Fullbright Scholarship in 2009 to study Fiscal Decentralization in Jordan at TAG-CB.

“I’m talking to Jordan’s Director of Training, and am very impressed by how he perceives his role,” explained Amara. “He is very aware of the role of education. He is a firm believer in all the concepts that we teach in good management – good resource management; good human resource management; issues of transparency; issues of accountability; promotions and positions based on personal ability, based on education. He sees where there is a need for further education and he is very anxious to put their very scarce resources into these fields.” 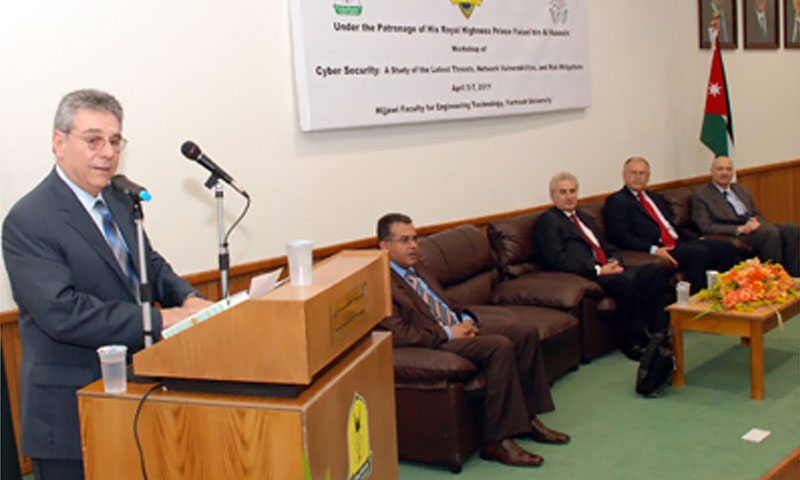 One effort being discussed is the possibility of establishing a joint Ph.D. program with YU and the JAF, giving more graduate level students the opportunity to attend NPS. There are currently very limited Ph.D. opportunities for Jordanians.

DRMI is also looking at deploying Mobile Education Teams to Jordan to provide human resource training to JAF leadership, with two training sessions scheduled for this year and three for next year.

Jordan’s Queen Rania Al Abdullah is also known for her strong support of education, particularly for women and children. She sees education as a tool that can only strengthen her country, and help build a secure future for generations to come.

“I really believe that education is one of the most important issues that we can tackle,” said Queen Rania last year in an interview with CNN, “because if you look at all the world’s problems from poverty to hunger, disease, terrorism, climate change, not one of these problems can’t be helped, if not totally resolved, through education … If you want to deal with issues of terrorism and radicalization, what better way to do it than through a quality education?”

The King echoes the sentiment, noting that Jordanians are people who can overcome even the most challenging circumstances. With Arab Spring changing into summer, Jordan’s leadership has expressed a desire to strengthen international ties and move forward to create a stable future for the country.

"Our people are educated, cultured and are capable of shouldering their responsibilities,” said Abdullah in a speech in February of 2011. “They are well aware that their interests, security, dignity and future are to me above any other consideration. And when I feel that there is failure in serving these basic rights, I take the right decision to protect and safeguard these rights. These rights are my top priority and they are a red line that I will not allow anyone to cross. My evaluation of anybody and any program is based on the extent to which they serve these rights."

“I know Jordanians,” he continued. “I know their wisdom, I know their sense of belonging and commitment to their country and its well being. God willing, they will continue to hold their heads high and Jordan will always stand tall with dignity.” ?