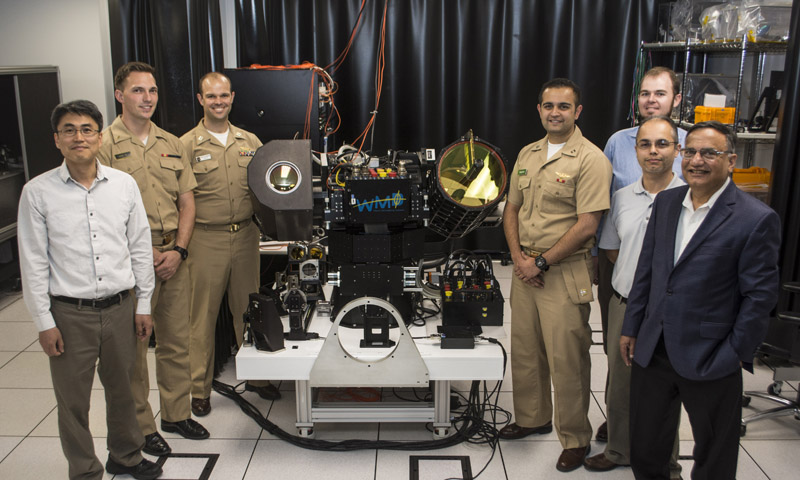 The Naval Postgraduate School (NPS), under the direction of Distinguished Professor Brij Agrawal with the university’s Department of Mechanical and Aerospace Engineering, has successfully completed the development of a $3 million High-Energy Laser Beam Control Research Testbed (HBCRT).

Agrawal’s team will use the testbed to further student and faculty research with a focus on the development of adaptive optics techniques, which correct for atmosphere-induced laser beam aberrations in maritime environments.

“Laser beam aberration due to atmosphere reduces the power of the laser significantly and distorts the image of the target, reducing the effectiveness of HELs [high-energy lasers],” explained Agrawal.

The testbed is a futuristic looking array of mirrors, lenses and control screens used to acquire and track a target, point a laser beam on it, and correct for jitter and laser beam aberration due to atmospheric effects.

“With a high-power laser, you need to mitigate atmospheric turbulence effects for the laser weapon system to be effective at an extended range,” explained NPS Research Associate Professor Jae Jun Kim.

“It is important for the Navy to correct this problem in order to protect ships from boats and UAVs [unmanned aerial vehicles]. The problem is very difficult to correct using adaptive optics,” added Agrawal.

And while NPS researchers intend to use the HBCRT to support student research endeavors, their student and faculty led work may contribute to Navy efforts to advance the development of HEL systems.

“The main objective of the HBCRT is to educate Department of Defense civilians and officers in this new and important area for the Navy,” said Agrawal. “We are not focused on weapons [systems], we’re focused on research.”

NPS’ research efforts in this area initially began with a 2004 doctoral student dissertation by then Air Force Capt. Melissa Corley, whose work led Agrawal to push for the establishment of an HBCRT at NPS. The idea was to create a testbed where students and faculty could conduct HEL research both in the lab and in the field.

“We did preliminary design work with consultancy from Boeing. It was decided to pursue a 10kW laser and 30 centimeter telescope with funding from the Office of Naval Research and the HEL Joint Technology Office with NPS procuring components for the testbed,” said Agrawal.

In 2011, NPS established the Adaptive Optics Center of Excellence (AOCOE) sponsored by the Office of Naval Research, the National Reconnaissance Office, and the Air Force Research Laboratory. With funding secured, the AOCOE awarded a contract to Boeing to integrate components into the HBCRT and make it operational.

“The development of the HBCRT has been very challenging due to technical, contract and funding considerations,” said Agrawal.

The HBCRT is barely out of its wrapper, but it is already being put to use by students for both thesis research and class work.

NPS student Ensign Patrick Dods is using the HBCRT to test a series of beam control measures designed to correct for atmospheric aberrations. He came to NPS through a Bowman Scholarship after beginning his initial foray into laser science under the tutelage of Naval Academy Professor Joshua Radice.

“The tests that we did sought to determine what can be done with a laser system against a sailing vessel, like those used by cartels to deliver drugs to the U.S.,” explained Dods. “It's a system of supreme interest to the Navy.”

During his internship, Dods developed an appreciation for what HEL systems may mean for the Navy. He notes that while the upfront cost of building a directed energy weapons system are high, the munitions that they use are very cheap. Once established, the only thing a HEL system needs is maintenance, an operator, and a steady supply of electric power. In fact, when used in conjunction with a nuclear-powered vessel, there is virtually no additional cost for munitions.

HEL systems are also silent and very difficult to detect. HELs deployed aboard submarines, for example, may one day be used to destroy the rudders of enemy vessels without revealing their position.

But despite the many tactical and technological advantages that HELs prove, there are draw-backs that must be accounted for.

“A kinetic weapon, like a bullet, takes time to get from you to the target and it transfers all of its energy immediately when it hits you,” explained Dods. “Directed energy, on the other hand, travels at the speed of light. But to be effective, you have to hold the beam on the target long enough to destroy it.”

It is precisely that problem that Agrawal and his students hope to explore. If successful, their research may one day play a key role in the defense of naval assets. Still, there are many challenges will have to be overcome before the mass deployment of HEL systems aboard naval vessels will be possible.

“[HELs] tend to be inefficient. For every 100 watts that I put into my laser system, I get a fraction of that power on the target dependent on the range that I am shooting the laser,” Dods noted. “A lot of energy is lost to heat and the beam must contend with varying temperatures, humidity and wind patterns, which distort it.

“High-power lasers are also problematic due to a phenomena called ‘thermal blooming,’ where the air around the beam becomes heated and further distorts the beam. That’s why for lasers to be effective they need to operate in a ‘goldilocks zone’ that does not lead to self-disrupting atmospheric affects,” Dods added.

Agrawal and his team are excited to explore these challenges, and others, and for the opportunity to develop capabilities with the very naval officers that may one day use them in the fleet.