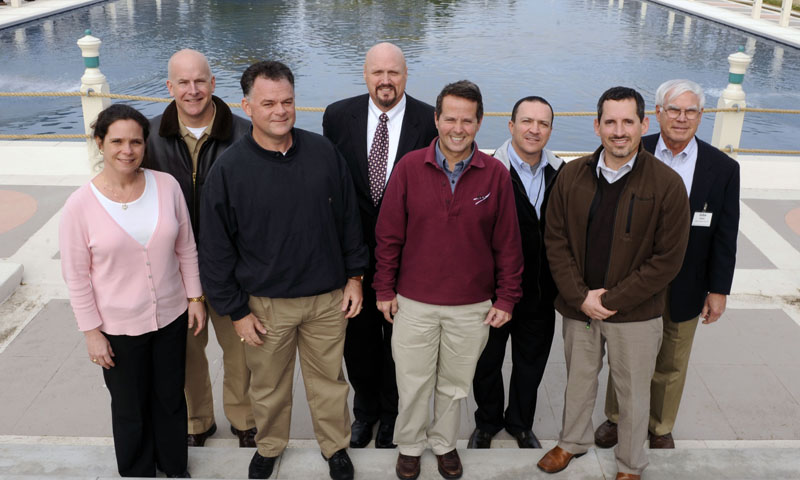 When NPS welcomed its newest cohort of Executive Master’s of Business Administration (EMBA) students, among them were the usual military officers representing traditional Fleet concentration sites such as San Diego, Pearl Harbor and Norfolk, Va.

But a unique group formed for the first time in Houston as well. A cohort of five Federal civilian employees representing NASA’s Lyndon B. Johnson Space Center joined the ranks as NPS students, marking the first-ever group participating from the space agency.

“For us in the business school, it’s the first time we have had students coming from NASA,” said Dr. Bill Gates, Dean of NPS’ Graduate School of Business and Public Policy (GSBPP). “From the feedback I’ve received so far, the team at NASA is really excited about this program. We’re able to offer tailored instruction that meets their needs at half the cost of similar programs offered at local universities.”

Highlighting the similarities between Department of Defense (DOD) financial management policies and regulations of other federal entities, Gates notes the relevancy NPS’ EMBA has in all facets of the federal government.

“In the program, we focus heavily on financial management and acquisition which is regulated by federal statute,” said Gates. “It’s a program that is fitting for all federal organizations, not just DOD.”

Joe Williams, Special Assistant for Procurement within the Mission Operations Directorate at NASA’s Johnson Space Center notes the format as a key strength of the EMBA program. By working in a team of cohorts participating in classes in a distance learning format, Williams is able to focus on graduate education while maintaining his professional responsibilities at NASA.

“My primary motivation for enrolling in the program is to gain practical, academic grounding for business management and administration, which I've been learning informally, on the job,” said Williams. “The NPS EMBA program offered the perfect combination of topic and distance learning format that allows me to remain in Houston to perform my regular duties when I'm not in class.”

While there are differences in the professional responsibilities of government civilian employees and full time military officers, Williams notes the orientation week hosted at NPS’ Monterey campus as an excellent format for meeting and developing relationships with others participating in the program.

“Being a civilian, I feel so humbled to be in a cohort with active service Navy and Marines,” said Williams. “The orientation week at NPS was a wonderful way to kick off the program, mainly for getting to know the rest of the cohort in person.”

In addition to the flexibility of the distance learning format, Williams attributes his motivation for enrolling in the EMBA program to the changing of his roles and responsibilities within the NASA ranks.

“My current role at NASA is to devise contract strategies for Mission Control – Houston, astronaut training systems and facilities, mission planning systems, and mission operations services for NASA's human spaceflight programs,” said Williams. “As I've transitioned in my leadership role at NASA over the last few years from a technical to business orientation, I found that I was at a slight disadvantage not being familiar with business terminology, practices and processes, and chose to take a proactive step to address my shortcomings.”

For incoming EMBA student José Garcia, who currently serves as the Deputy Chief Financial Officer for the Johnson Space Center, the ability to focus on studies with other professionals with years of experience was a draw to the program.

“I first heard about NPS’ (EMBA) program while on travel at the Aimes Research Center, and then again when I returned to Houston,” said Garcia. “I looked at the curriculum and it really seemed to focus on the real-life experiences brought to the classroom by other students.”

Williams’ opportunity to participate in the program came after expressing interest in continuing education during a periodic performance review.

“During a mid-term performance review with my supervisor last December, I expressed the desire to look at options to continue my education,” said Williams. “A few days later, I saw an official announcement about a fellowship being offered by the NASA/Johnson Space Center for the NPS EMBA program.”

From the earliest stages of the program, Williams sees the relevant correlations between the program’s course of study and his day-to-day duties at NASA.

“I'm early in the program, yet I am seeing benefits right away,” noted Williams. “The Financial Reporting and Analysis class is bringing me up to speed on the language of accounting that is so prevalent in the NASA cost management world, and I have found that to have helped in my interactions with the cost analysts.”

While some courses offered in the program develop strong business acumen, Williams describes the impact an ethics course already had on his personal development.

“The Ethics and Moral Reasoning class has led me to look at daily occurrences through the lens of moral reasoning, and to be stronger about my own convictions – the "why's" that drive me. I've looked ahead at the rest of the program and am looking forward to the topics to come.”

“As the Department of Defense, and the Federal Government in general, become more fiscally constrained … there is a tighter focus on funds and where those funds are spent,” said Hatch. “The EMBA program provides students with the key skills necessary to execute financial management and resource management plans.”

Williams is already seeing the benefits of studying at NPS, and ascribes much of the rich educational experience provided to the faculty that leads the program.

“The classes are excellent, and the professors I've met so far have this aura of academic credibility that makes the whole experience that much more worthwhile,” noted Williams. “It's like the difference between reading about something, versus being immersed in it with world experts at your side. It simply can't be beat.”

NPS’ EMBA program has been in existence since 2002, and was originally designed to reach members of the aviation community which typically have been unable to attend resident programs due to career gates. In 2009, a civilian EMBA program was added to reach financial management professionals within the Department of the Navy. The course of instruction includes 17 courses taught over a two-year period. Students attend classes one day a week, with two courses taught each quarter.