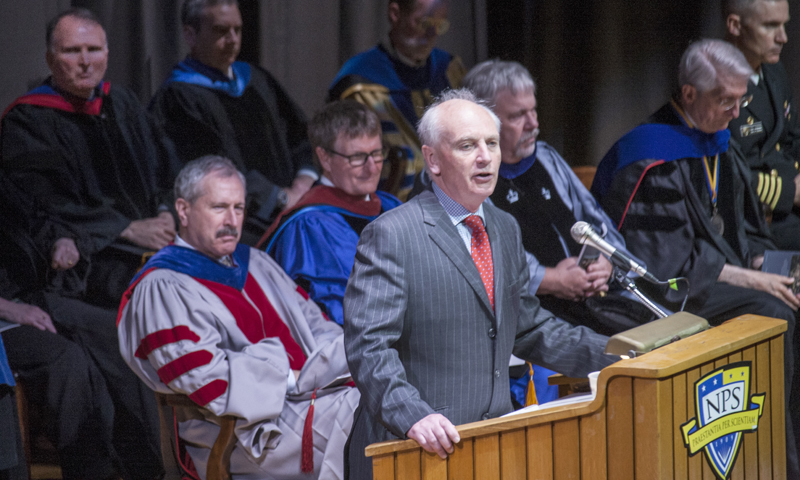 Lauded international military historian Sir Hew Strachan offers the commencement address during the 2017 Winter Quarter Commencement Ceremony, March 31. The class of 278 graduates, including 11 international students from nine nations, was encouraged to think about lessons to be learned from the first World War, given the centennial of the U.S.’s involvement is only a week away.

Strachan’s reputation and respect as both a historian and a strategist is far-reaching. In a recent column for “Foreign Policy,” author Tom Ricks coined Strachan Secretary of Defense James Mattis’ “favorite strategist.”

NPS President retired Vice Adm. Ronald A. Route welcomed the assembled students and their families to the graduate ceremony.

“Distinguished guests, faculty and staff, family and friends, and soon to be graduates, welcome to our Winter Graduation ceremony,” said Route. “This is a day of celebration of individual commitment, perseverance and personal accomplishment, and we are here today to express our great pride in our students.”

Route concluded his address to the gathered audience, thanked them for their dedication to NPS, and then turned the podium over to NPS Professor and Chair of the Department of Defense Analysis, Dr. John Arquilla.

“[Sir Hew Strachan] is one of the most eminent historians of our time,” said Arquilla. “He is currently a Professor of International Relations at the University of St. Andrews, and he is a councilmember of the Royal Company of Archers, also known as the Queen’s Bodyguard of Scotland. He has many other honors, and to name them all would take a while.”

With a round of applause, Arquilla introduced the well-known historian who set the stage for the purpose of his address right up front.

“It is a great honor to be here, and a privilege to be able to share in celebration with those of you who are graduating today,” Strachan began his address. “My theme today, however, is commemoration rather than celebration.”

Strachan re-iterated that a week from today, the United States would be commemorating the centennial of its entry into the first World War.

“The crucial question is, will the United States notice, and why anyone should notice?” asked Strachan. “To the Brits, this seems like a strange question, because in the United Kingdom, the first World War was big news. Twice as many people were killed in the conflict as were killed in the second World War.”

Strachan pointed out that everyone alive during that time was affected by the war in some shape or form.

“In 2012, then Prime Minister David Cameron told us that he wanted us to remember,” said Strachan. “The British, like you Americans are good at remembering those who have fallen in their service, and we do it anyway, whether there is a centennial or not.”

“But because this war is now 100 years past, there is nobody here who personally remembers anybody who died in that conflict. If any of you have any direct remembrance, it is not of those who died but of those who survived, who came back to father subsequent generations,” he added.

“It means we forget … We forget all of those who worked in the other aspects of the war effort, which is why we come to define it as a total war,” said Strachan. “We, whether we are British or American, tend too often to see this war as futile or wasteful conflict characterized by mass death.

“Of course, like all wars it has many of those features, but how we judge a war depends more on where we are today and how it seemed to those who took part in it,” he added.

In concluding his remarks, Strachan reminded the students of a very important fact regarding war.

“The first world war, more than the second world war, reminds us that the decision to go to war for democracy is likely to be contentious and painful, rather than clear cut and self-evident,” explained Strachan. “It also reminds us that it is easier to get into a war than it is to get out of a war … We should commemorate the centennial because it leaves us with enduring insight.”

Following the ceremony, Arquilla commended his colleague on his thought-provoking approach to the commencement address.

“[We are grateful that] Sir Hew [agreed] to speak at our commencement,” Arquilla said. “Aside from the extremely valuable content of his speech, I think the timing was wonderful, coming so close to the centennial of our involvement in World War I — which truly kicked off the American mission, as Sir Hew said, to engage actively in the world community, to work multi-laterally, and to encourage the spread of liberal forms of governance.”

Strachan offered his own keen insight into why he felt it was so important to engage the graduating students with provocation of thought, in addition to the usual congratulations.

“I’m an academic, and to me, the questions are far more important than the answers,” he said. “And that’s how it should be in an institution of higher education.

“In the U.S., the first World War is the forgotten war. The American Civil War and the second World War are far more important in terms of how the country identifies itself,” he explained. “The centennial is really an opportunity to think about that, to think about what it means to be the U.S. at this time in its history.”

Strachan’s distinguished career includes an impressively-long list of honors and achievments. In December 2012, “Foreign Policy” magazine included him in its list of top global thinkers for the year.  He was knighted in the 2013 New Year’s Honours, and was appointed Lord Lieutenant of Tweeddale in 2014. In 2016, he was awarded the Pritzker Prize for Lifetime Achievement for Military Writing.