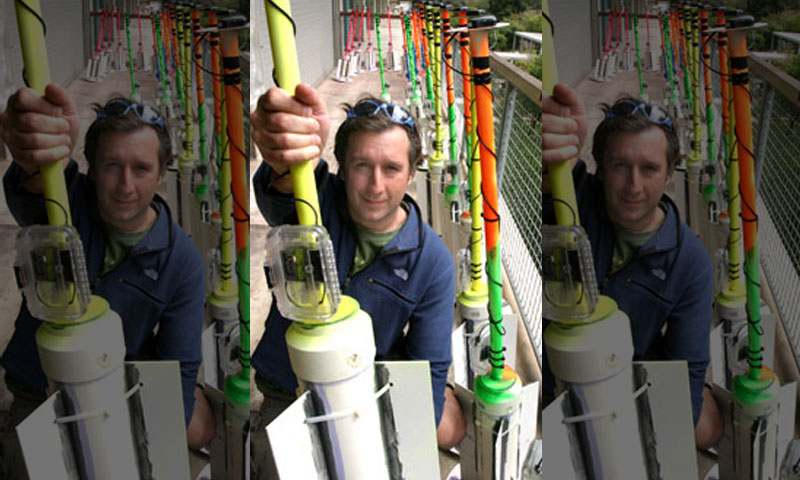 In surf zones near the Naval Postgraduate School and around the world, NPS Oceanography Assistant Professor Jamie MacMahan is quietly revolutionizing the understanding of rip currents, turning them from a swimmer’s worst nightmare into a friend.

Instead of expensive GPS sensors that relay position data in real time, MacMahan and his students mount low-cost GPS devices with memory cards inside swarms of drifters whose brightly-colored florescent poles bob in the waves like giant pick-up sticks.  The dozens of position-tracking sensors are then retrieved and their saved location and velocity data post-processed to reveal detailed surf zone flow patterns across various wave and tidal conditions.

The conventional view of rip currents -- that they’re fast, narrow flows moving away from shore -- is dangerously incomplete.  Rather, they’re a system of giant whirlpools whose circular eddies act like conveyer belts to carry a swimmer who treads water safely back to shore.

“Finding a way to make inexpensive GPS-enabled drifters, where you can field 40 or 50 instead of just four or five, has filled in the voids of the traditional view of how the surf zone flow field behaves,” he said. “That first view was that everything in the rip current goes out to sea, where we now know that only 10 to 20 percent exits the surf zone. That’s a major advance in understanding.”

“The whole idea is to keep the drifters cheap and then do aggressive analysis afterwards,” explained MacMahan, who won NPS’ Menneken Research Award in 2009. “The cost breakthrough came when I found a hobbyist GPS with a geo-caching memory card and was able to do some tweaks on it, which brought the cost down to only $350 per unit, compared to $3,500 to $7,000 for traditional GPS-enabled drifters. Because they’re so cheap, we toss them into the surf and don’t mind losing some, but we usually get them all back.”

The Naval Postgraduate School’s GPS-enabled drifters are also highly accurate, tracking horizontal position to within 40 centimeters and measuring current speed to within 1 centimeter per second.

The standard view of rip currents began to expand beyond the single plume model in 2001, when MacMahan and his student team ran a six-week experiment in the surf zone near NPS using traditional fixed sensors whose data was fed into a fluid dynamics model. He, along with NPS Emeritus Professor Ed Thornton and NPS Research Associate Professor Tim Stanton, then led a series of field experiments using the new low-cost drifters that have produced the most accurate and detailed maps of real rip currents to date.

This new understanding of flow patterns is important for littoral, amphibious and diver operations, as it overturns the accepted view that rip currents don’t have a significant alongshore impact but transport most suspended material out of the surf zone to the inner shelf. The more complete view, that 80 to 90 percent of these currents remain within the surf zone, means that the vast majority of floating sediments, bubbles, plankton, and nutrients simply re-circulate in the zone. 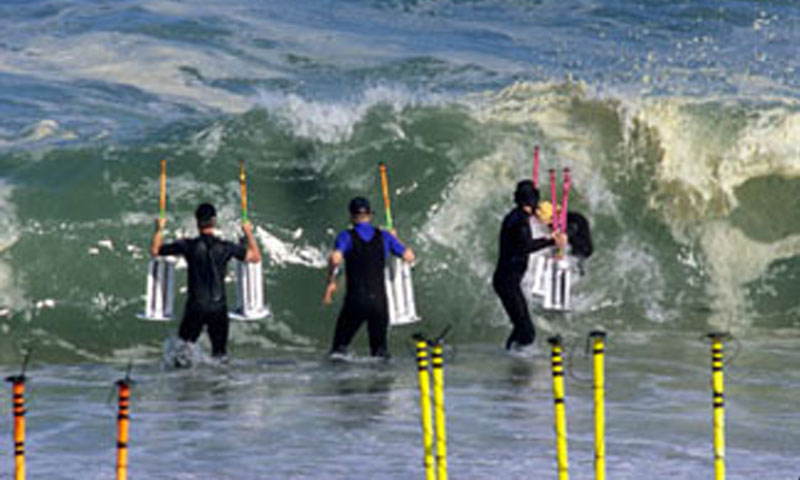 “The most important reason to study rip currents is because the majority of the world’s population lives within 200 miles of a coastline and these deadly currents are common on most beaches where waves come in at right angles to the shore,” said MacMahan. “They’re the third deadliest natural hazard in the U.S., after heat waves and floods, and kill more people in Florida than lightning, hurricanes and tornados combined. So this is a life-and-death difference that everyone needs to understand.

“But understanding the mechanisms behind rip currents is important not just for swimmer and beach safety,” MacMahan stressed. “It’s also important for tracking and predicting the trapping of pollutants from rain runoffs and other sources and harmful algae within surf zones, and thus for water quality and sea biology. It used to be thought that these currents carried all the ‘bad stuff’ out to sea, but now we know that they don’t. Depending on the location and conditions, only about 16 percent of floating material is ejected from the surf zone each hour. And this doesn’t happen continuously, but only every five to 15 minutes, and material is transported out to only about two surf zone widths.”

In addition to the drifters, which give a two-dimensional velocity profile, MacMahan and his team are also now using dye and dye sensors, which can pick up parts per billion, to get a 3D view of current flows in and out of the surf zone. “The dye represents tiny sea creatures and pollutants,” he said. “We’re working with biologists under NSF [National Science Foundation] sponsorship to see how and how fast they’re moved out of it, and how and how fast they come back into it.”

In June, MacMahan will expand the 2D surface drifter work using dye tracers in another surf zone field experiment in the Sand City, Calif., and yet another at the Carmel River State Beach next year.

With Office of Naval Research sponsorship, MacMahan’s team has also used drifters to study river currents for naval operations. “We’ve deployed in rivers all over the U.S.,” he said. “Drifters are an inexpensive way to estimate river velocity, but they don’t work well for meandering rivers, because as soon as they go around the first bend, they flow towards the bank and tend to get stuck. They’re fine for studying river mouths, where fresh water flows meet the ocean.”

“My primary role is as a field experimentalist,” MacMahan said. “I go out and collect observations to validate theory or models using unique platforms – UAVs, autonomous catamarans and personal watercrafts [jet skis] – that get away from all the traditional approaches to increase our understanding. Field observations are critical for validating models, and every time we do an experiment, we find new things. But that’s only half the picture. I work closely with Professor Ad Reniers of the University of Miami, a former NPS postdoctoral fellow, who’s a numerical modeler. In the U.S., we’re a very unique team. Rip currents have been studied since the 1920s, and you never know when that fundamental paradigm shift will occur.”

MacMahan doesn’t just talk the new rip current paradigm – he also “walks” it. Wading into the water in a wet suit with a GPS unit attached his cap, he leans back and floats until he’s picked up by the current. Almost to the breakers and still floating, he’s swept along parallel to the beach, and in only four minutes is returned to shallow water.

“I’ve jumped in a lot of rip currents all over the world, and I’ve always ended up back onshore,” said MacMahan. “If you swim parallel to shore – the traditional recommendation – you have a 50-50 chance of swimming into a strong current and becoming exhausted. But if you don’t fight it and just tread water, you have an 80 to 90 percent chance of the rip current conveyor belt returning you to shore in three to six minutes. Many experienced surfers know this, and even talk about ‘riding the rip.’

“There’s still the 10 to 20 percent chance the currents won’t return you to shore, which is where the lifeguards come in,” MacMahan added. “Each year in the United States, 18,000 people have to be rescued from these currents by lifeguards, representing 80 percent of all surf zone rescues, and 100 of them drown,” he stressed.

“We’re working with U.S. lifeguards on how to integrate this new understanding of rip currents into their training and public awareness campaigns, including new beach warning signs that reflect the new view,” he said. “We presented our research results and the new, fuller paradigm they represent at the first International Rip Current Symposium held at Florida International University in February.”

MacMahan added a few more words for the wise.

“On many American beaches, rip currents are the fastest at low tide, and their strength increases the larger the waves and the shallower the water. This is why you can be standing in the water one second and be suddenly pulled away from shore the next. Rip currents can also change their speed from slow to fierce in an instant, due to infragravity waves.

“The ‘bottom line’ if you’re caught in a rip current?” MacMahan asks rhetorically. “If you’re within the breakers, ‘ride the rip’ … tread water and stay afloat and the current is likely to return you to shore with minimum expenditure of energy. If you’ve been ejected outside the outer breaker line, swim parallel to shore until you’re outside the current, then swim back towards shore.”

As for the future, surfers know “The Seventh Wave” is the biggest. With the new rip current paradigm, it looks like MacMahan has caught his “Big One” and his research will be making waves for a long time to come.