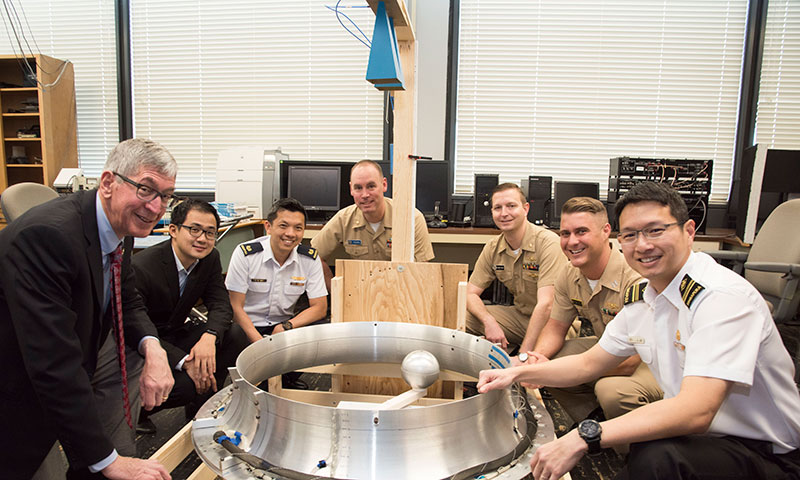 Kampe was invited to listen to the presentations and give some professional feedback at the request of award sponsor, the Monterey Bay chapter of the Armed Forces Communications and Engineering Association. Kampe’s background is also in electrical engineering, first as an engineer with Hewlett Packard, then with the founding group for Agilent Technologies, a spinoff from HP.

“I really do appreciate coming out to NPS and seeing first-hand how officers are conducting their research. It’s fascinating to me,” said Kampe.

Singapore Navy Maj. Chai Meng Lim, along with five other theses presenters, were given the opportunity to talk about their research with Kampe. For Lim in particular, he was happy to hear that Kampe found his scale-model prototype of a wind turbine radar interference reduction barrier interesting.

“My research is concerned with lessening the impact of wind farms on air traffic control and weather radar systems. The large blade construction on these wind mills have large radar cross sections and are highly visible to radars and the interference that the turbines produce can impede the detectability and characterization of targets of interest. I’m hoping that my screen and other filtering measurements can help mitigate the problem,” said Lim.

“My measurement was conducted on three different configurations of the setup … One with just the rotator; the second with rotator with metallic shroud; and, the third with the rotator with metallic shroud and screen placed at the inlet of shroud,” he continued. “The results were processed and presented using MATLAB for comparison. As the angle of the mounted antenna varies, the Doppler frequency return varies as well, allowing us to investigate the effects of Doppler frequency returns,” said Lim.

Lim says the education he has received at NPS, and the concepts he’s learned in class, have been strengthened significantly by his research in the lab.

“The journey is especially enriching when hands-on opportunity is given with good laboratory support from NPS,” said Lim.