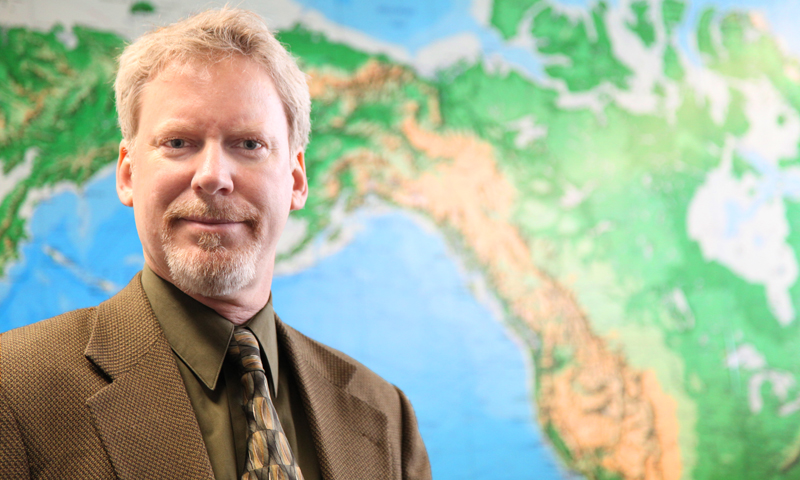 After more than two decades in NPS’ Department of Oceanography, Dr. Jeff Paduan has been selected to serve as the university’s new Vice President and Dean of Research, effective July 2.

Commenting on the selection, Paduan said, “I was incredibly impressed with the candidates that stepped forward from the faculty during the search process. I am humbled to have been selected."

After several months of consideration, Paduan was recommended by the Dean of Research Search Committee consisting of several faculty and chaired by Graduate School of Engineering and Applied Sciences (GSEAS) Dean, Dr. Phil Durkee. In a statement released to the NPS community, NPS Executive Vice President and Provost Dr. Leonard Ferrari expressed strong support for the committee’s recommendation.

“Based on all of the requirements of the position and the distinctive qualifications of each of the candidates, the committee reached consensus that Professor Paduan should be the candidate,” explained Ferrari. “Professor Paduan is Chair of the Oceanography Department and has a significant research and publication record.

“He served as the President of the Monterey Bay Crescent Ocean Research Consortium and in many other leadership roles serving his discipline,” Ferrari continued. “He has also earned both teaching and research awards at NPS. President Oliver and I concur with both the assessment of the strength of the candidate pool and with the recommendation to appoint Professor Paduan.”

Durkee noted that the final candidates represented a solid understanding of the university’s unique mission and processes.

“The work we do at NPS is different than most universities, we have a mission that goes beyond academics to the interests of the Navy,” said Durkee. “So it was important from the Provost’s perspective, and the committee was supportive of this as well, that someone internal would not have that hurdle of understanding how NPS is different.

“Research is central. We don’t do well in a graduate school classroom if we’re not engaged in research,” Durkee continued. ”Because this is a graduate school for military officers, and they are going out to be innovators, if they aren’t taught innovation processes through research, they’ll understand some theorems and some of the issues, but they won’t understand how to make things better. And that’s really the key for putting research as a critical component of the NPS program.”

The position Paduan will be filling is an important one to NPS, as the university’s research is well regarded within and beyond the defense community. Having served in the oceanography department for 21 years, Paduan understands the importance of research, and the challenges that faculty face in funding and executing research projects.

“It’s my view that research is really an equal partner with the instructional programs on campus, in terms of making this a unique institution for the Navy and the students,” explained Paduan. “I think without research that’s cutting edge and competitive with other universities, the campus itself would be much less unique … It’s the research that really adds the breadth to the programs.”

Paduan adds that he is looking forward to the opportunity to further acquaint himself with various departments on campus, as the Research and Sponsored Programs Office continues to support the proposal and research function across NPS. He explained that his responsibilities are becoming clear as he prepares to step into his new role.

“The biggest responsibility, I think, is to represent the research constituency on campus. When things come up that we need to react to, I think that my role as Research Dean will be to explain or determine what the impact of potential alternatives would be … on the researcher,” he noted. “The administration can use that input to better decide how do we go forward … I think we need more of that, and it will be my first priority.”