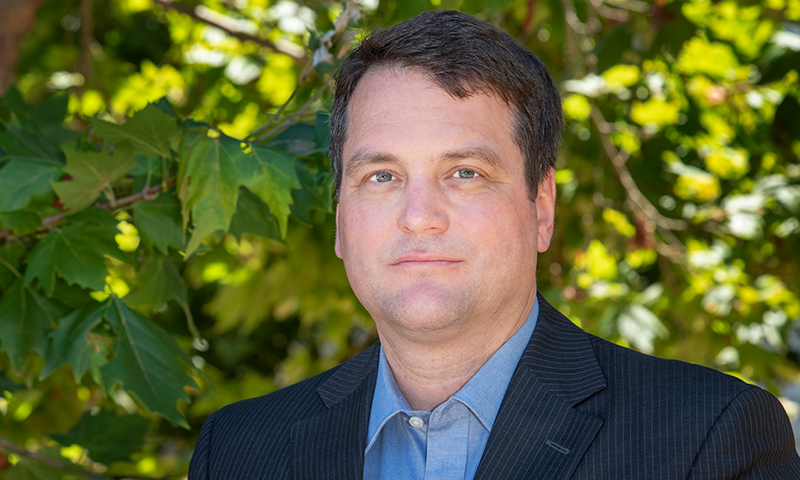 Dr. Rob Dell, a member of the NPS Department of Operations Research for nearly 30 years, stepped into his new role as dean of the Graduate School of Operational and Information Sciences (GSOIS), Aug. 18.

Dr. Rob Dell, professor and past chair of the Naval Postgraduate School (NPS) Department of Operations Research is the new dean of the university’s Graduate School of Operational and Information Sciences, officially stepping into the position, Aug. 18. Dell takes over following more than six years of leadership by Dr. Gordon McCormick, who will return to teaching in Defense Analysis department.

“This is an opportunity for myself, and GSOIS in general, to be able to step in and serve my colleagues and help advance our school,” said Dell. “The school was well served during [McCormick’s] time as dean and we should be very appreciative for everything that he’s done.”

Dell has been teaching NPS students for nearly 30 years, joining the OR department as an assistant professor in 1990, and served as its department chair from 2009 to 2015. He says one of his top priorities is to continue GSOIS’ role in executing the university’s strategic plan, in the focal areas where the school’s expertise can best contribute.

“My goals are being developed as I have conversations with different faculty members within GSOIS,” said Dell. “Cyber is a key element of everything we do at NPS, and I can definitely see the university continuing to move out in that direction. Artificial Intelligence is also one of those areas that certainly resides within GSOIS as well, and that’s absolutely going to play as one of the initiatives that we’re looking to as part of the school.”

Dell earned his Ph.D. from the State University of New York at Buffalo in 1990 and he has done research for every uniformed service on topics such as U.S. Navy capital planning and U.S. Army base realignment and closure. Dell’s awards include the Barchi, Koopman, and Rist prizes for military operations research, a Brazilian Navy Tamandaré Merit Medal, two Department of the Army Payne Memorial Awards for Excellence in Analysis, and two Department of the Navy Superior Civilian Service Awards.

The Graduate School of Operational and Information Sciences prepares future senior military leaders to succeed in an uncertain, rapidly changing and information-intensive environment through research and educational programs. It consists of the Departments of Computer Sciences, Operations Research, Defense Analysis and Information Sciences, as well as the Cyber Academic Group and the Data Science & Analytics Group.