Major Breakthrough in Carbon Material Could Have Broad DOD Applications

Major Breakthrough in Carbon Material Could Have Broad DOD Applications 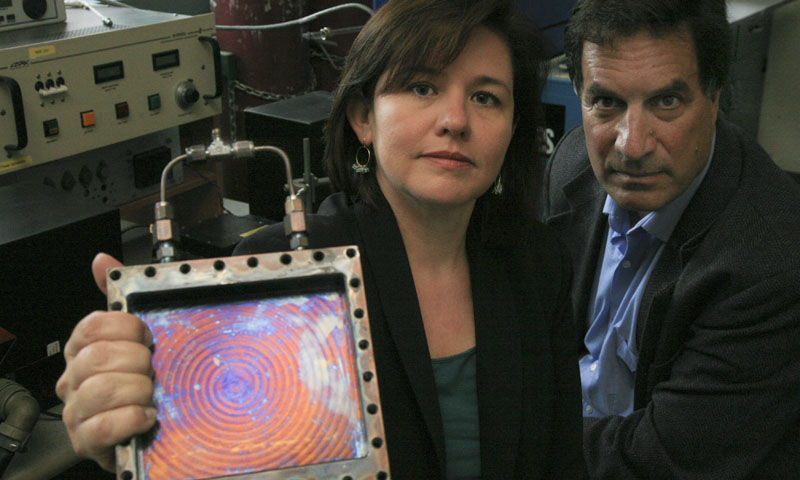 NPS Department of Mechanical and Aerospace Engineering Associate Professor Claudia C. Luhrs, left, and Department of Physics Research Professor Jonathan Phillips, right, display the cavity used to grow their groundbreaking carbon nano-fiber foam. With its unique set of properties, the structure has the potential for utility in a broad set of DOD and civilian applications.

The foams, formed solely of intertwined carbon fibers, were generated in NPS’ Functional Materials Laboratory located on campus in Watkins Hall. The fabrication steps rendered a tridimensional object with the appearance and viscoelastic properties of a polymeric foam. However, the novel material is composed only of carbon and is remarkably lightweight, temperature resistant and hydrophobic.

Luhrs, who has written extensively about the physical characteristics of carbon nanostructures generally, and CFF specifically, notes that other researchers have created foam-like structures from carbon nanotubes, but those structures were fragile and required added polymers to prevent them from disintegrating.

The NPS team was able to demonstrate, for the first time, that CFF can behave as a viscoelastic solid with stable mechanical properties without the need of a polymeric component.

“We are very pleased with the idea of creating a foam [without polymers] that does not degrade,” said Luhrs. “[Combining carbon nano-materials] with polymers imprints undesired characteristics in the product such as reduced conductivity and low thermal stability due to the use of polymeric matrices.”

“CFF has unique electrical and mechanical properties … our present work provided a variety of data that helps define the properties of this material and a proof of concept in evaluation of potential applications,” said Luhrs.

“We were also able to show that the material has potential for use as the sensing material in a strain sensor since it presents a linear relationship between resistance and strain,” added Phillips.

There are a number of methods employed to make carbon fibers, but the method employed at NPS began with a discovery made more than 30 years ago.

“The fiber foam work represents the 'front end' of a train that started in 1982 when it was discovered that radicals created homogeneously during combustion processes not only produce soot, but also, in the presence of catalysts, can produce a variety of solid carbon forms,” explained Phillips.

“We established that macroscopic carbon foam could be fabricated in virtually any shape using the constrained formation of fibrous nanostructures (CoFFiN) process,” he continued. “[NPS developed CFFs] consist of a solid mat of intertwined, nano-scale carbon fibers … defined by the shape of the mold in which they are grown.”

Developing a substance like CFF is complicated by the size of the carbon nano-fibers themselves … miniscule, cylindrical carbon structures that are “grown,” rather than built, in labs. Despite their sizes, length-to-diameter ratios of just 132,000,000:1, they are surprisingly strong and have any number of properties that are of great interest to scientists, particularly those involved in materials research.

“The discovery in succession over the last two decades of carbon fullerenes, carbon nanotubes and the special properties of graphene, has dramatically increased interest in possible applications of carbon nanostructures, both on the basis of their electrical and mechanical properties,” said Luhrs. 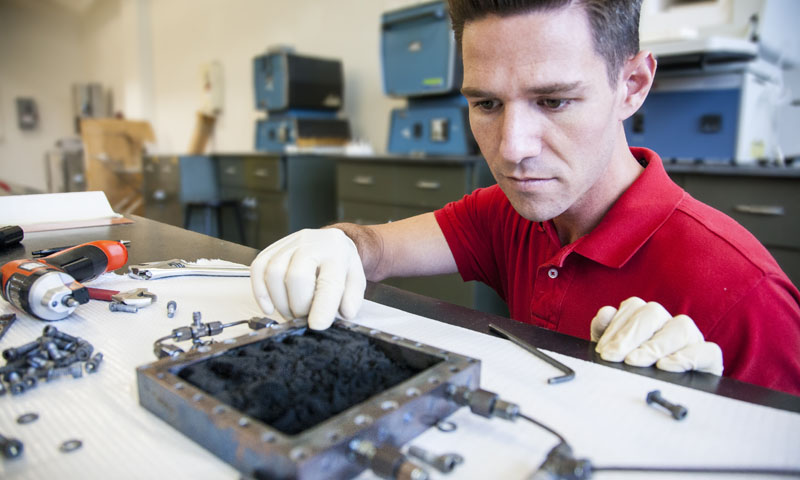 Lt. Will Curtin, a student in the mechanical engineering program, demonstrates the carbon nano-fiber foam (CFF) following its creation in the NPS Functional Materials Laboratory. For the first time, NPS researchers have developed a CFF that behaves as a viscoelastic solid with stable mechanical properties without the need of a polymeric component.

Carbon nano-fibers are presently employed in composite materials and can be found in everything from corrosion resistant paint to composites that are both light and strong for cars, airplanes, sporting equipment among others.

Another characteristic of the foam shows promise for civilian industrial applications.

“Even though the foam repels water, it absorbs oil,” said NPS student Lt. Cmdr. Chris Daskam who worked with Luhrs and Phillips to complete his thesis on CFFs. With the capability of absorbing environmentally-damaging liquids like crude oil, Daskam noted the obvious applications of such a material in the petroleum industry.

But there are also characteristics that lead to improved safety in CFF applications. Luhrs noted that, due to its unique properties, CFF does not pose the inhalation risks with which other carbon-based materials may have to contend.

“As a foam, it does not disintegrate and does not become airborne easily,” said Luhrs.NPS summer intern Edwin Gonzalez worked with the NPS team as part of internship program with nearby Hartnell Community College. He had the rare opportunity of working directly on Luhrs’ groundbreaking materials research, and the added honor of being recognized as a named author on the paper published by Luhrs, Daskam and Phillips.

“When Professor Luhrs talked me to about the project, they were just getting started and I found it very interesting … We had interviews with 15 different mentors and we chose who we wanted to work with. I was interested most in Luhrs’ work,” said Gonzalez.

The intern noted he is excited about the prospect of being published and equally pleased that he will be able to add his paper to a resume’ upon graduation. But if he has it his way, he will not have to travel far to get a research position.

“I am going to try and go back to NPS. I would love to get back in there and continue work with carbon nano-fibers,” said Gonzalez. “Hopefully, we will be able to develop CFF materials that can be used to help Soldiers on the battlefield.”