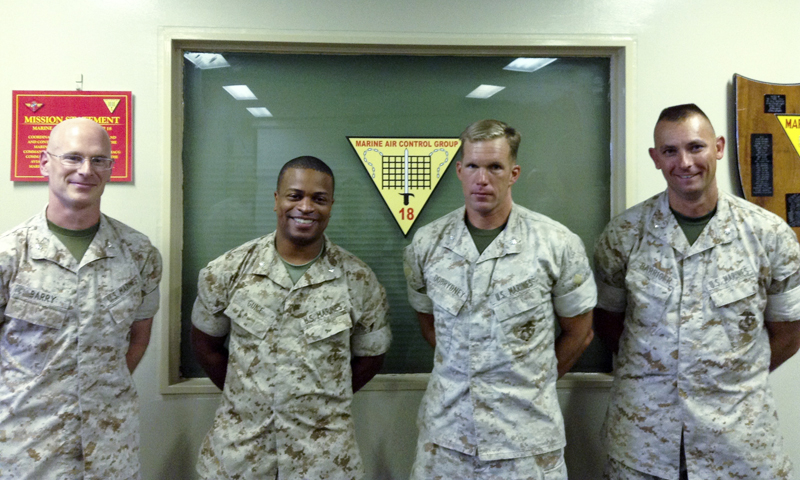 “I was always told that it was a career killer, and I for one am gratified that we are proving otherwise,” said Marine Corps Lt. Col. John Dobrydney, commanding officer of Marine Wing Communications Squadron – 18 at Camp Foster in Okinawa, Japan.

Dobrydney is one of four squadron leaders within Marine Air Control Group (MACG) 18, but he and his fellow COs share more in common than just command. They are also all Naval Postgraduate School alumni, and are collectively putting to rest the old myth that their peers’ command career paths cannot go through Monterey.

In only five years since his graduation, Dobrydney has discovered that not only did NPS not hinder his path to command, he has also learned to use higher education as a way to open doors and guide his career.

“NPS awakened a real desire to pursue lifelong learning and to continually ask why,” said Dobrydney, who earned his Master of Science in Information Technology Management in the fall of 2009.

“After leaving NPS, I pursued the systems analysis graduate certificate, and I also finished off an undergrad engineering math curriculum at a local community college,” said Dobrydney. “Even now I am deliberating between a Ph.D. in public policy or pursuing a second master’s in either operations research or systems engineering. It all depends on where my career path takes me.”

Lt. Col. John Barry, commanding officer of MACG-18’s Marine Air Control Squadron – 4, says he has been able to apply the education from his Master of Science in Management degree directly to his later billets.

“All aspects of the managerial curriculum at NPS have helped me in all of my follow on assignments, especially strategic management with Professor Nancy Roberts,” says Barry. “I have used that class nearly every day since graduation. Additionally, the writing skills I learned from Professor Eitelberg allow me to train junior officers daily.”

Lt. Col. Rob Guice, commanding officer of Marine Tactical Command Squadron – 18, says he found the technical training equally as valuable as the management training he received while earning his Master of Science in Information Technology Management.

“NPS furthered my problem-solving skills, improved my ability to identify process inefficiencies, and allowed me to better understand when and where to best leverage information technology,” said Guice. “Aviation command and control is as much people and processes as it is about IT systems. These skills translated regardless if I was supporting the tactical direction of air power or implementing IT solutions at a service headquarters.”

Lt. Col. Steven Barriger is the commanding officer of Marine Air Support Squadron – 2. In the decade since his graduation, he has encouraged many junior officers to attend NPS, and to embrace the opportunity and disregard the rumors.

“In the past two months I have had three officers PCS to NPS or Monterey, and I have told each of them to take advantage of the opportunity while you are in an academic environment to complete your PME,” said Barriger.

“It feels really good to be an alumnus and to know that the decision to attend NPS did not destroy my career like so many said it would. I know several other NPS alumni slated to command squadrons, and one slated for a Marine Air Control Group, so the NPS kiss of death seems to have died in the Marine Corps.”