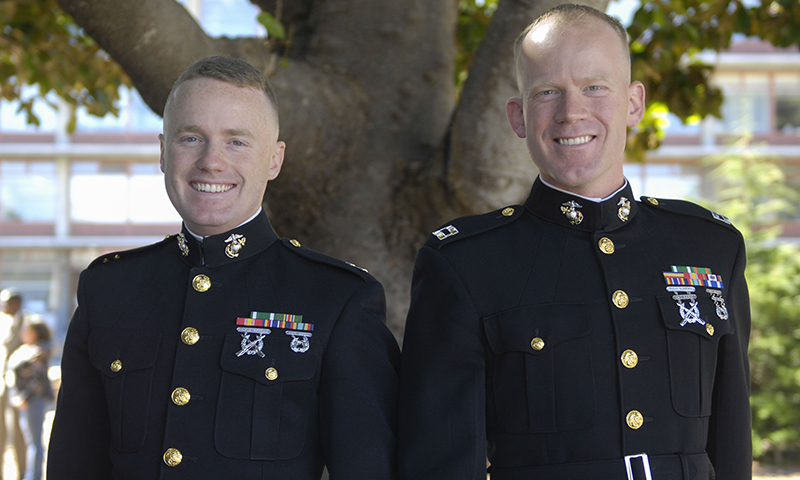 Marine Corps Capts. Ezra Akin, left, and Micah Akin, right, await the beginning of the Spring Quarter graduation ceremony, June 16. The Akin brothers graduated this past quarter, with both Marines earning top student awards for their efforts in the classroom.

Marine Corps Capts. Ezra and Micah Akin have accomplished quite a bit during their time together at the Naval Postgraduate School (NPS), culminating with their participation in the Spring Quarter graduation ceremony, June 16. Not only did both brothers complete their studies in technically-demanding fields – Ezra Akin in the operations research program, and Micah Akin in computer science – both were also honored with top students awards for their efforts in the classroom.

“What an incredible blessing to be able to cross the stage with my older brother,” said Ezra Akin. “Brothers are rarely stationed near each other, and for our careers to cross in this way is even more rare.”

“I am still amazed that the Marine Corps allowed Ezra and I to attend NPS at the same time,” said Micah Akin. “Our families have loved the opportunity to spend time together.”

Like many siblings, these two Marines had their rivalry growing up, and joining the military hasn’t stopped it.

“Ezra and I were always close. Whether in a brotherly row or in friendship, we have always competed and enjoyed the game of it,” said Micah Akin. “Our time in the Marine Corps has proved an excellent continuation of the rivalry, from comparing PFT scores to academic grades, we continue the friendly competition.”

“I am incredibly honored and humbled to receive this award,” said Ezra Akin. “The student body is incredibly talented and driven, so I am primarily thankful for my fellow students who have completed the journey with me!”

“I am consistently amazed by the caliber and professionalism of NPS computer science professors and students,” added Micah Akin. “I am thankful to my instructors and fellow students for their help, and my wife Robin for her patience.”

Education is widely considered an investment in one’s profession, Ezra Akin says, and offered some advice to the students that just arriving on campus.

“It behooves you to make the most of your time,” he said. “While you may be able to pass a course without too much difficulty, did you really learn as much as you could have from that world-class professor? Make your time here count.”

With graduation behind them, the brothers will continue on in their careers on separate paths. While Micah Akin returns to an operational setting, Ezra Akin will actually remain on campus, selected as the first participant in a Marine Corps pilot program that keeps a student on campus for a doctoral degree.

“We are sad to part for now as the Marine Corps has wisely chosen to continue Ezra's education in operations research here at NPS,” said Micah Akin. “I will be heading to the Pentagon to work for the Marine Corps Deputy Commandant for Information.”

“Other Marines have completed Ph.Ds. in technical fields, but did it on their own and not as part of a Commandant of the Marine Corps designated program,” said Lyons. “Capt. Ezra Akin is paving the way for a new generation of Marines with the technical expertise to leverage emerging technologies in support of Marine Corps requirements.”

Ezra Akin says he is honored for the opportunity, and is ready for the challenge.

“The Department of Defense, specifically the Marine Corps, has invested a significant amount of time and money into my career and this graduate education,” said Ezra Akin. “I am very grateful and honored to have been allowed to pursue this degree, as it will be invaluable both in my follow-on service within the Corps, as well as in the civilian world once I depart the Corps.

“Additionally, to be allowed to pursue a Master of Science in Operations Research from one of the most respected and highest ranked operations research departments in the world is hard to fully comprehend. What an incredible honor,” he added.