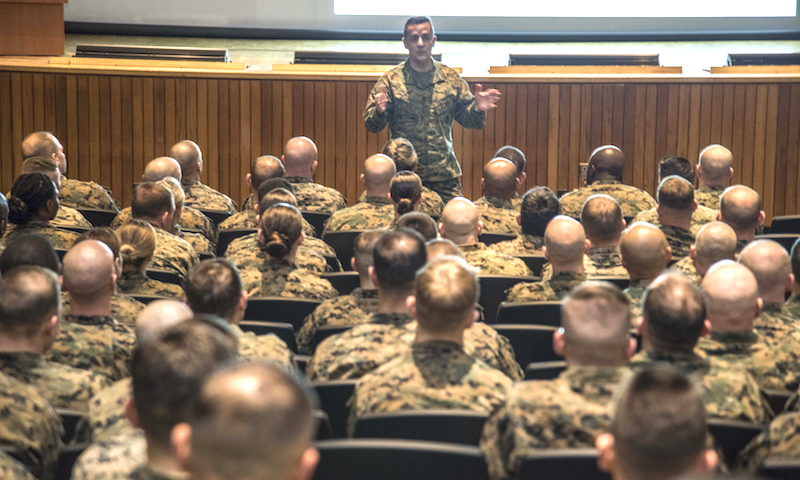 Lt. Gen. Michael Rocco, Deputy Commandant for Manpower and Reserve Affairs, addresses the university’s cohort of Marine Corps students during a visit to campus, Feb. 12. Rocco highlighted the critical role the university plays in officer promotion and retention, and in preparing Marines for future challenges.

The Deputy Commandant of the Marine Corps for Manpower and Reserve Affairs (M&RA) recently traveled to the Naval Postgraduate School (NPS) to emphasize the critical role the university plays in preparing Marines to adapt and overcome the myriad challenges of tomorrow’s battlefields.

Lt. Gen. Michael A. Rocco, along with several NPS alumni on his staff, reinforced his vision of how M&RA is transforming to better meet the Marine Corps’ needs -- and how NPS fits into this -- through an informal conversation held in King Auditorium Feb. 12 with more than 200 Marines attending NPS.

“I’ve come to realize that NPS graduates play such a vitally important role in what we do in the Marine Corps,” Rocco told NPS public affairs ahead of the event. “I lean heavily on the folks that have graduated here in trying to figure out what exactly the Marine Corps of the future is going to be.”

M&RA, the largest department of the Headquarters Marine Corps, directly assists the Commandant by planning, directing, coordinating and supervising the Marine Corps’ active and reserve forces. Under Rocco’s aegis, M&RA has doubled down on high-quality retention efforts to keep abreast of a highly competitive civilian job market, especially in the cyber realm and high-tech occupations.

Over the past few years, M&RA has placed great emphasis on retaining NPS talent across the Fleet, Rocco said, reflected in significantly higher promotion rates for NPS alumni versus the general officer population. In fiscal year 2018, for example, 90 percent of Majors who had attended NPS were promoted to O-5; the promotion rate for officers without a degree from NPS was 60 percent.

“Mission first, people always,” Rocco emphasized. “We yank these guys and gals out of their [Military Occupational Specialties] for 24 months and then they have to do a payback tour, but it’s important that they know why what they’re learning is important and that the Marine Corps values their work here.” 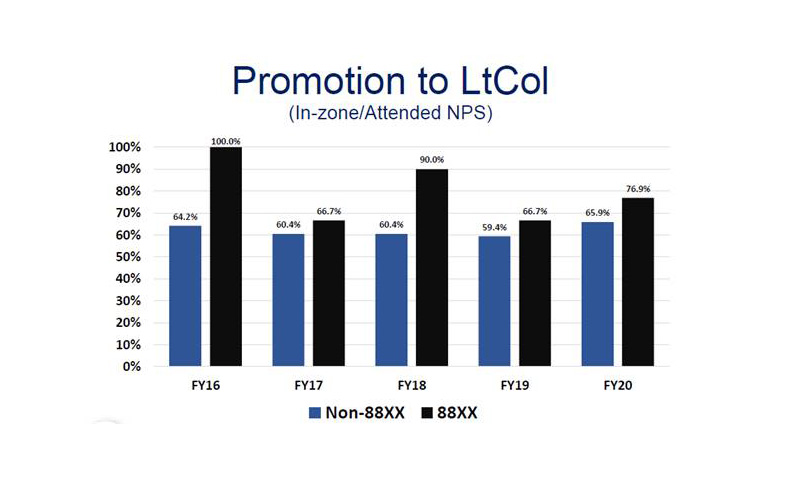 Marines pursue a wide range of advanced degrees at NPS, including aeronautical engineering, business analysis and cyber operations, to name a few.

They then apply the specific knowledge, skills and abilities honed at NPS to the nation’s most pressing security concerns when they return to the Fleet, whether expanded expeditionary warfare capabilities, cutting edge cyber operations, or manpower analysis at M&RA.

“I wanted to bring a couple of recent graduates so the Marines at NPS could hear it from someone who’s actually walked in their shoes, from the guys and gals who have been here, on why what they study at NPS is so important, and why they are working so hard here,” Rocco explained.

“We are trying to modernize M&RA, which means so much more than just ‘well, you get new computers’ – it’s how we do business, it’s transformational, and how we retain the best and the brightest,” he continued. “As we get more technically focused at M&RA, we need folks with advanced degrees to figure out exactly what we need, how we need it, how much we need of it, and a lot of that analysis they do for me comes straight out of what they learn here.”

Rocco’s NPS visit coincided with Secretary of the Navy Richard Spencer’s announcement of a sweeping new education initiative across the Navy and Marine Corps, in which NPS plays a prominent role.

Following the publication of “Education for Seapower,” the 430-page “clean sheet review” he commissioned to examine the Navy’s existing educational programs, Spencer stressed the need to unify the service’s academic institutions into a cohesive whole in order to optimize human capital and maintain a competitive edge in the face of technological challenges, especially in the cyber and electromagnetic domains.

“I am convinced, now more than ever before, that the intellectual development of our naval leaders is the most critical warfighting capability for our national security,” he wrote in a Feb. 5 memo outlining his goals with the initiative. “Organizationally, we must scale with agility the many advances made across the Department, as well as those learned from our sister services, partner nations, and the private sector.”

As a flagship educational institution, NPS has a long tradition of cultivating creativity and rigorous thinking in military leadership to confront the nation’s greatest national security challenges, especially through times of great change.

The nation is once again facing a sea change in global affairs with the rise of great power competition, strategic complexity and seismic technological changes, and NPS remains poised to hone the creative talent needed to meet these challenges head-on.

“We all have an interest in ensuring that NPS endures as the preeminent, postgraduate research and education institution and the first choice for the Navy and Marine Corps and our partners,” Spencer recently told the NPS community. “But going even further, I want this institution to be the primary education and research enterprise for a partnership with the private sector, government sector and academic coming together at the research level.”

Rocco realized this when he first visited the campus in June as the keynote speaker at an NPS event honoring the 76th anniversary of the Battle of Midway and vowed to return.

So he did: when he, his staff and several NPS alumni landed in Monterey to make good on that promise, they did so to underscore NPS’ value both to M&RA and across the Fleet, and how much the Corps values the Marines that come through NPS.

“M&RA is light years ahead of where we were a few years ago, but the folks that put all the data together and do all the analysis, that wasn’t me, that was the folks that graduated out of here,” Rocco said. “The education programs at NPS provides the Marine Corps the analytical power to make decisions that impact the entire Marine Corps.”

“At the end of the day, it’s all about making a better warfighter,” he added. “I don’t care what your MOS is -- whether it’s aviation, infantry or logistics -- the fact of the matter is the work you do here will make the larger Marine Corps better, more focused warfighters.”