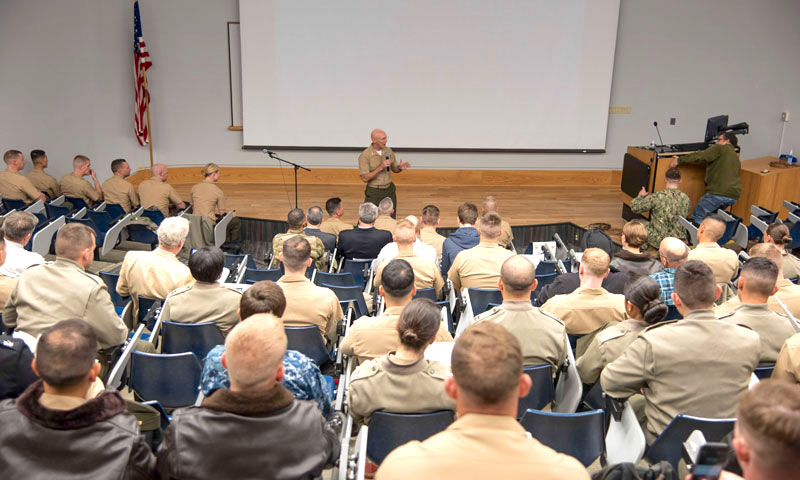 Students, staff and faculty packed the Naval Postgraduate School’s (NPS) Glasgow Hall for the latest Big Ideas Exchange (BIX), May 22. A departure from the typical BIX format, the latest event served as a forum for NPS students, six Marine Corps officers, to share their thesis research in an effort to promote awareness, receive feedback, and offer their own solutions to the grand challenges facing American national security.

Senior Marine Corps Representative and Associate Dean of Research Col. Todd Lyons kicked off the exchange that would go on to see the six students give detailed, 10-15 minute presentations on their individual research topics.

“This format demonstrates not only what they have learned in their education here, but also the research they can deliver in terms of value back to the Marine Corps,” said Lyons. “The vast majority of the Marine Corps does not come to NPS, and they don’t know what our students can do ... This was a great way of showcasing that.”

“My big idea was using high-altitude balloons to provide additional options for space systems during emergency communications situations,” said Writt, a student in the Space Systems Operations program. “What makes this so beneficial is that these small, versatile solutions can be made out of parts that are already there and anyone who is really tech savvy and excited about new ideas has an example of what it can look like.

“I learned so much from listening to other presenters,” Writt added. “Having the opportunity to hear other people’s perspectives really helped me look at a new angle.”

Following graduation, Writt will move on to the Joint Space Operations Center to act as a space operations planner which will give her the opportunity to explore her ideas and innovations that she learned at NPS in a joint environment.

“My presentation covered the Marine Corps rapidly integrating more free space optics, or what most people know as laser technology, into our tactical communications in order to better combat our adversaries’ threats in the electromagnetic domain,” said Felder, a student in the NPS Department of Computer Science. “These are far more resilient to jamming, are far less likely to be detected, and as our communications systems expand and our needs for big data expand, this will provide a far more efficient use of networks.

“By having events like this to share knowledge and proliferate some of these ideas, it creates and environment where we can more quickly adapt to the threats on the modern-day battlefield,” Felder continued.

“Having senior leadership like Maj. Gen. Mullen and Maj. Gen. Coffman in attendance helps show the presenters that the Marine Corps really cares about what they are doing and that it is essential to what they do,” said Lyons. “Additionally, having them listen to the ideas and research our students have done allows them to take those ideas back and propagate them through their jobs, both in the Navy and in the Marine Corps.

“This is the first Big Ideas Exchange that we have done where the students are center stage and the feedback they received was that it was pertinent to what the students in the audience were studying,” added Lyons. “In the long term, this will help students think about how their research can take advantage of what has already been done and build a continuum of research, instead of a one-off thesis.”