Marine Cyber Chief Stresses the Role of Humans, Not Hardware, in the Fight

null Marine Cyber Chief Stresses the Role of Humans, Not Hardware, in the Fight

Marine Cyber Chief Stresses the Role of Humans, Not Hardware, in the Fight 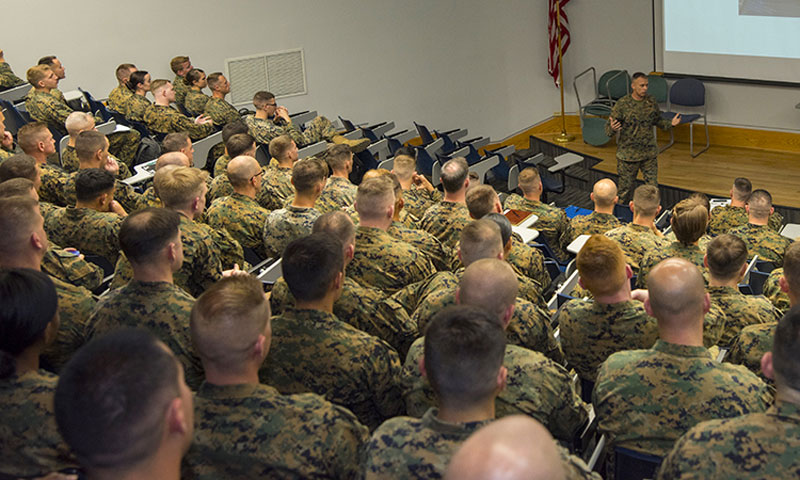 Maj. Gen. Matthew Glavy, Commander, U.S. Marine Corps Forces Cyberspace Command, discusses the critical role of humans over hardware in the cyber mission, and beyond, with NPS Marines during a visit to the university campus, Nov. 8.

Maj. Gen. Matthew Glavy, Commander, U.S. Marine Corps Forces Cyberspace Command, took the opportunity to candidly address Marines attending the Naval Postgraduate School (NPS) during a visit to the university campus, Nov. 8. Glavy discussed the importance of respecting and understanding the most important part of his mission ... humans, not hardware.

“I wanted to share this presentation with all of you, it’s the same discussion that I would have with commanders to guide them in what is important for decision makers and why this domain is pertinent and relevant,” said Glavy.

Through his experiences in past leadership positions and from the role models who inspired him, Glavy stressed that is the Marines around him, officers and enlisted, that are the most important resource, and should be nurtured to excel in defense and maintain military superiority abroad.

“During my time at the [Second Marine Aircraft Wing II Marine Expeditionary Force] I had no choice but to be enamored by hardware while I tried to manage 500 airplanes and 1,000 vehicles,” said Glavy. “But any success we have, whether it’s in artificial intelligence, quantum physics or even F-35s and B-22s, what is really going to make the difference is the people. I had to learn this the hard way.”

Glavy continued to describe several examples that cemented his premise, one of which was posturized by military strategist, retired U.S. Air Force Col. John Boyd.

“Col. John Boyd was quite a character ... cantankerous, nonconformist, a real renegade,” said Glavy. “In the final version of the collection of his life’s work, titled ’A Discourse on Winning and Losing,’ he dissected every piece of military history possible and he came up with the conclusion that ‘people, ideas and things,’ in that order, are what matters most.”

Glavy went on to offer some of those dissected references of military history, including Germany’s resurgence between World War I, and the second World War.

“They were far behind the curve in amassing technological developments of tanks, planes and ships due to recovery from World War I and the treaties and restrictions imposed upon them,” Glavy said. “But, when it came time to progress their country’s agenda, Germany was able to excel very quickly.”

Another example Glavy referenced is that of the development of the F-16 fighter aircraft.

“Boyd was the father of the F-16, and he built it with two things in mind: the pilot and the mechanic,” Glavy said. “Today, it has been the most prolific aircraft ever produced, 4,500 F-16s have been built, and that’s because it can do what the pilot needs it do, and the mechanic can keep it flying.”