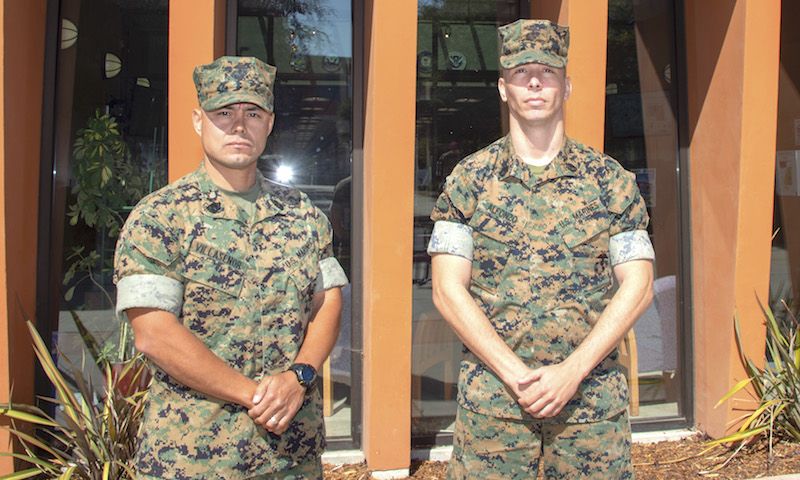 Master Sgt. Bruce Villasenor, left, and Gunnery Sgt. Ivan Alfonzo are two senior enlisted Marines attending NPS as participants in the Foreign Area Staff Non-Commissioned Officer (FASNCO) program, providing an opportunity to advance their skills in the region they will operate in through a graduate certificate program at the university.

During a lecture on the history of Turkey, a Naval Postgraduate School (NPS) professor describes an environment of tension and conflict. For U.S. Marine Corps Master Sgt. Bruce Villasenor, it sounded eerily similar to his own experiences while stationed overseas, en route to the U.S. Embassy in Istanbul.

“I traveled from Istanbul to Ankara for [weapons qualifications] training,” said Villasenor. “As we were driving back, we got a phone call from the embassy’s post one detachment commander. He said, ‘Don’t come back to the embassy ... We were literally five minutes from the gate.”

The experience was just one of many for Villasenor, but as he continued in his coursework at NPS, he realized his experiences in Turkey were quite helpful in bringing context to his studies.

Villasenor is a departure from the typical NPS student, but as a Foreign Area Staff Non-Commissioned Officer (FASNCO), he is eligible to take part in a program the provides senior Marine NCOs with an opportunity to attend a graduate-level certificate program at the university.

The FASNCO program provides Marines with the tools needed to bridge relationships between the United States and its allies abroad by providing language, regional expertise, and cultural (LREC) education opportunities based on the regions they will be deploying to.

“The program allows us two quarters to take as many courses as we can to complete a certificate depending on which region we’re assigned after completion,” said Villasenor.

He was selected to undergo FASNCO training for the sub-Saharan Africa region because of his familiarity with the culture, as he had served there before. He spent a few months in Senegal to immerse himself in the French language before becoming a student at NPS to study the history and culture of the region he would be responsible for.

“When a professor is talking about topics such as Africa’s interactions between the population and government, challenges with education, and extreme poverty from neglected or mismanaged funds, I feel that I’m able to get a deeper understanding and appreciation because I’ve been there and saw this firsthand,” said Villasenor.

Before he was aware of the FASNCO program, Villasenor already had experience working with allies of the United States. He helped bridge the gap between the Turkmen and American communities in Ashgabat, Turkmenistan, by organizing and running events through the support of the local government.

“These types of events were never offered to the local community before,” said Villasenor. “It was during this tour when I realized that direct engagement with other cultures through a common language is the most effective form of communication.”

Upon hearing about the FASNCO program in 2014, Villasenor directed his career to qualify, which included earning an undergraduate degree in information technology management.

“I read the pre-qualifications and noticed that I was already doing the cultural part of the program,” said Villasenor. “I asked, ‘What do I need to make sure that when the time comes, I can go ahead and apply?’

“I started focusing hard, making sure I completed my undergrad, my PME … all my core education,” he continued. “I got high scores on my annual basic training to stay competitive and to make sure I’d get promoted before doing this program.”

“The opportunity to use my multicultural background in a Marine Corps job interested me in the FASNCO Program,” said Alfonzo, who credits working with the Marine Corps Embassy Security Group for providing most of the qualifications that he needed for the program.

“I was able to gain a lot of LREC experience and daily interaction with interagency officials and foreign nationals,” said Alfonzo. “In addition, I received language training and made the most out of learning and immersing myself into each culture.”

Alfonso said that effective social dynamics and demonstrating an understanding of the region’s culture is critical to building a rapport with allies. To hone his skills to be an effective FASNCO in the Latin America region, his courses at NPS include the history of Latin America, and politics in Mexico.

“The knowledge and history of the region is key for becoming an effective FAS Marine,” said Alfonzo. “Everything that we learn in our specific region curriculum at NPS definitely enhances our expertise and capacity to operate in other regions.”

“Moreover, we have the opportunity to network with Foreign Area Officers from the same region and participate in socials, and other security cooperation events with international students from NPS and other foreign dignitaries,” he added.

Selecting well-rounded Marines who excel in academics, cultural knowledge, and as military leaders ensures that FASNCO program participants understand the areas that they will be assigned to upon completion. As they complete their courses at NPS, Villasenor and Alfonzo plan to take their lessons from the classroom and the field to their next command as they train their allies.

“It’s about sharing experiences,” said Villasenor. “How can you make the group better? Is there anything you can do to avoid something or minimize potential damage? Ideally, I would like to help identify as many opportunities for FASNCO to be deployed. I’m going to do my best at whatever job they give me. I don’t want this experience to go to waste.”

“The key is to maintain solid relationships and win the trust and confidence of our allies,” added Alfonzo. “In my opinion, since you are dealing with people, it comes down to effective social dynamics and demonstrating understanding of their culture.”