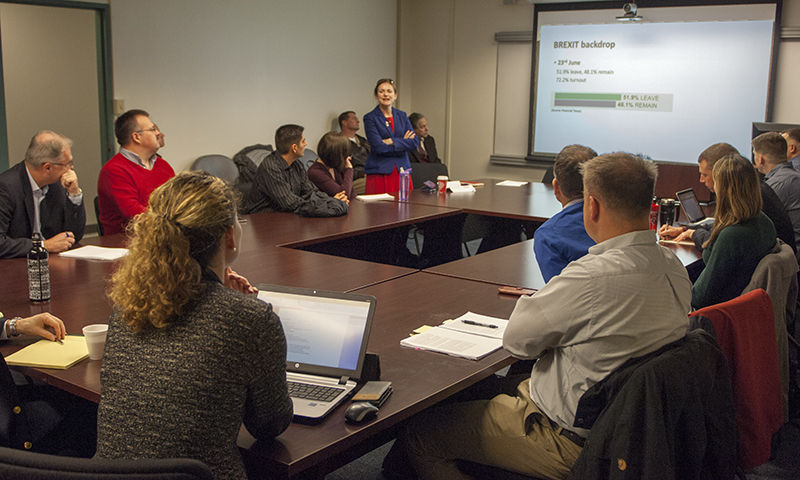 Catherine Stihler, Member of the European Parliament (MEP) and Rector of the University of St. Andrews, offers her unique insights into the United Kingdom’s (UK) departure from the European Union during a guest lecture with NPS students and faculty in Glasgow Hall, Feb. 6. Stihler’s expertise to speak on the complexity of Brexit comes from her distinguished decades-long career in public service, serving since she was elected as the youngest MEP ever for the UK in 1999.

Catherine Stihler, member of the European Parliament (MEP) and Rector of the University of St. Andrews, offered her unique insights into the United Kingdom’s (UK) departure from the European Union (EU) during a guest lecture with NPS students and faculty in Glasgow Hall, Feb. 6. Stihler’s expertise to speak on the complexity of Brexit comes from her distinguished decades-long career in public service, serving since she was elected as the youngest MEP ever for the UK in 1999.

“137 words, that is all that the bill is regarding us leaving the European Union,” explains Stihler. “On the first of February, the vote just last week in the House of Commons … 498 in favor, 114 against … to trigger Article 50.”

Article 50 of the Treaty of Lisbon refers to the legal mechanism that allows the UK to begin its separation from the collective of European states, the European Union. The bill making its way through UK parliament to enact Article 50, at just 137 words, is short but incredibly impactful, Stihler says, given the complexities of Article 50. The Article itself reads:

“1. Any Member State may decide to withdraw from the Union in accordance with its own constitutional requirements.

2. A Member State which decides to withdraw shall notify the European Council of its intention. In the light of the guidelines provided by the European Council, the Union shall negotiate and conclude an agreement with that State, setting out the arrangements for its withdrawal, taking account of the framework for its future relationship with the Union.  That agreement shall be negotiated in accordance with Article 218(3) of the Treaty on the Functioning of the European Union. It shall be concluded on behalf of the Union by the Council, acting by a qualified majority, after obtaining the consent of the European Parliament.

3.  The Treaties shall cease to apply to the State in question from the date of entry into force of the withdrawal agreement or, failing that, two years after the notification referred to in paragraph 2, unless the European Council, in agreement with the Member State concerned, unanimously decides to extend this period.”

Stihler described Article 50 as being authored in such a way as to “dissuade” a country from leaving the EU given the immense complexities involved. Some countries in the EU do not have constitutions, like Wales, Scotland and Northern Ireland who have devolutions instead of constitutions, therefore withdrawing based on “constitutional requirements” is problematic. She also explained how the framework of the future relationship between the EU and the separating state does not have to be set in stone, but notes that the stipulation of an extendable two years of negotiations should allow for time to resolve conflicts.

Stihler focused the bulk of her lecture to explain how Brexit will impact her work as the Rector of St. Andrews University.

“Because you are in an educational institution, I thought I could provide some interesting examples about what this means for the university sector,” Stihler explained. “You can choose any sector – finance, pharmaceutical, agricultural, fishing – I chose universities to give insight into what Brexit will mean to our education, particularly in higher education.

“In Scotland, 16 percent of the academic staff and 23 percent of the research staff are from the EU. We have 24,000 students of EU nationalities studying in Scotland universities, and Scotland gets 88 million in research funding a year,” she continued.

When the United Kingdom leaves the EU, these three areas of staff, students and funding become problematic international issues.

“EU staff are being told that if you don’t have a British citizenship, we will help you get one to try and ensure the staff, which are so important to the institution, are retained,” she continued.

“Horizon 2020, which is the main European research commission, brings 88 million pounds to Scotland a year. There are three types of membership EU countries, associated countries or potential EU candidates, and then other countries that are not eligible to receive funding. If we come out fully without sorting this out, we are not only going to lose 88 million pounds annually, but we are going to lose the potential to be eligible to apply for new research programs.”

Stihler concluded her presentation with a forecast, of sorts, on how the transition over the next two years could look.

“I think it will be a rocky road … And if anyone tells you they know what is going to happen with Brexit, they are lying because no one knows what the new reality will be, other than that it is interesting times we live in.”