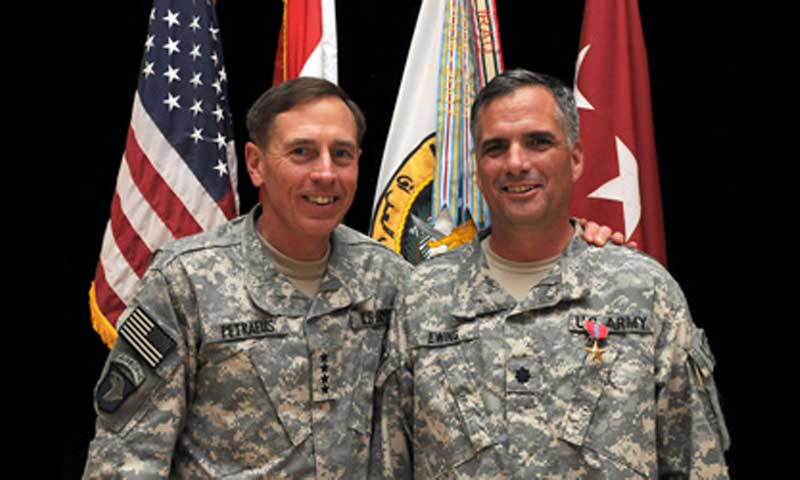 Ewing, an Operations Research Systems Analyst (ORSA) and former Army Special Forces officer, was originally tapped to work for the MNF-I Strategic Plans and Assessment group, but after a review of his service history, was asked to join Petraeus' Commander's Initiative Group (CIG), which was in need of an experienced ORSA.

When Ewing reported to the CIG in January, he immediately began preparing for Petraeus' April report to Congress. "The commanding general was very concerned about having someone there he could trust to look over the numbers," Ewing said. "There were two things he told me:'If it's bad news, don't dress it up, and especially with numbers, make sure we're right.'"

With help from fellow staff members and other MNF-I units, Ewing tracked more than a dozen primary statistics for the general each week and prepared those numbers for briefings with the president, secretary of defense, visiting delegations and members of Congress.

"I would provide analysis of the statistics for everything from civilian deaths, military deaths, the number of IEDs, to car bombs, caches found and cleared, and sectarian violence," Ewing explained. "As my time there progressed, we still collected security data, but then the challenge turned to collecting and analyzing more political, economic and social types of information. That effort is still ongoing."

As the only ORSA within the CIG, Ewing took interest in the different insights of the other staff members, many of whom had backgrounds in the social sciences. The diverse and talented staff reflected the general's multi-disciplinary approach to decision-making, Ewing said.

"After watching Gen. Petraeus work, I realized that he is a unique individual in that he can synthesize a great amount of information and doesn't necessarily trust a bunch of quantitative models to give him ideas," he added. Ewing recalled a proposal he presented to the general, which involved building a decision-analysis model to quantify levels of success. The idea eventually "went down in flames," he said, because Petraeus felt the problems they faced were too complex to model.

Ewing further described the general as someone truly dedicated to his mission. "Being around the commanding general, you got a sense that things were more important than yourself, that we weren't doing this for ourselves," he said.

Despite many 17-hour work-days, Ewing still managed to remain engaged with his research at NPS, and even had the opportunity to present his department's research efforts to Petraeus. Ewing said he received very positive feedback for an improvised explosive device interdiction model, which he had worked on with OR Professors Kevin Wood and Javier Salmeron. "He [Petraeus] was convinced that this would be a great asset to Multi-National Corps-Iraq and to a couple of brigades in particular, and I did get a chance to talk to those folks, so that was great feedback," he added.

After returning from Iraq, Ewing began developing a new agenda for his career. While he was once eyeing retirement, Ewing said he now plans to continue his career in the Army. Additionally, his new goal is to expand his ties between NPS and the operational units that might benefit from the school's research.

"My outlook has changed. Before, I knew there was a contribution to be made by just teaching and doing research ... but I'm now trying to find ways to expand on that and contribute more to what is going on out there," he explained.

"I'm trying to leverage some of the connections I've made while I was over there to bring in more research here," Ewing continued. "We have fantastic faculty; some of them are world-class experts in what they do. So figuring out how to leverage this brain-power for the war-fighter - that's my new agenda."