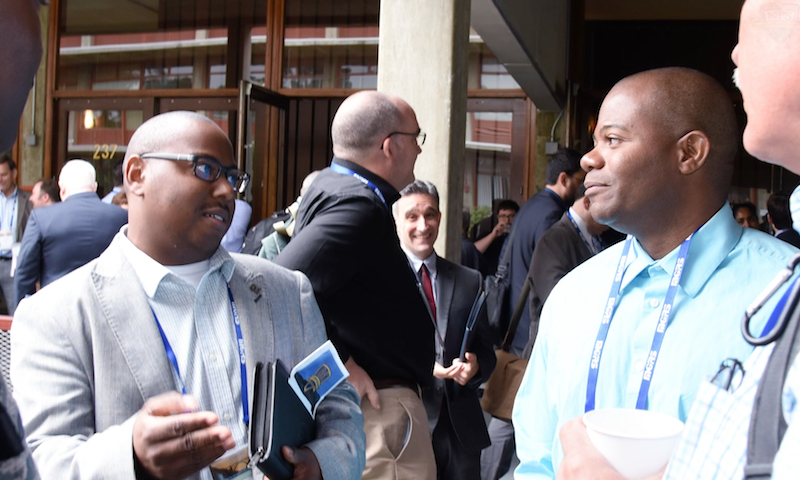 The Naval Postgraduate School (NPS) hosted the annual marquee event for one of the nation’s largest organizations of military operations research professionals, providing an invaluable opportunity for the university’s faculty, current students, and scores of alumni to stay on top of their game.

“It is a distinct honor for the school to host this distinguished symposium,” Navy Capt. Mike Ward, NPS Chief of Staff, told members at the society’s plenary session in a packed King Auditorium. “We cannot think of a finer place to hold this symposium than NPS, which we feel has the country’s pre-eminent program in operations research.”

Over the four-day event, over 700 unique presentations, both classified and unclassified, and 34 different working groups delved into every facet of national security decision-making – from cyber warfare to wargaming, data mining to budgetary planning and myriad other topics – all under the theme Supporting a Balanced, Modern and Ready Nation.

“The presenters were excellent, the audiences were engaged, and many interesting questions were asked,” said Navy Capt. Brian Morgan, NPS Operations Research Program Officer and site coordinator for the MORS Symposium. “That’s one of the strengths of this symposium: to bring people together so they can establish new collaborative working relationships.”

The aesthetic splendor of the NPS campus made the institution the ideal location for the event, enabling junior analysts to gain invaluable professional experience, seasoned analysts to hone their skills, and senior analysts to pass on their wisdom to the next generation.

“But the real reason is that it just belongs here,” MORS Navy sponsor Chuck Werchado said. “This is where the Navy does its graduate training for operations research analysis.”

Twenty years ago, as a junior analyst, Werchado attended his first MORS Symposium, also held at NPS. As he went from building to building to attend various lectures, he was taken aback by the breadth of the field.

“At the time, I was working for the Naval Undersea Warfare Center, so ops analysis was simply ‘kill the submarine,’” Werchado said. “Yet after sitting in on a nuclear weapons lecture and then advanced modeling simulation lectures, I came away with a deep appreciation that lasts to this day of just how much this society does.”

U.S. Marine Corps Capt. Nicholas Rice took advantage of the symposium’s location to advance his exposure to the discipline he had just graduated in, awarded his NPS master’s in operations research in June. His thesis explored the optimization of secondary repairable maintenance in the Marine Corps.

“We built mathematical formulas that will help the Marine Corps determine which of several methods they should use for several different systems subcomponents to reduce the turnaround time and the cost associated with maintenance,” he explained.

Rice presented his work in a special working group replete with experienced professionals who could challenge him to take his work to the next level.

“The MORS event allowed me to link with the community to get a better understanding in practice of how everything that we’ve learned is used,” he said. “As a recent graduate I was able to speak with leading professionals and see how they’ve seen it done.

“I was also able to speak with graduates who came through here a few years before me,” Rice added. “It really helps to get an understanding of what my life is going to be like as I leave NPS, and also what this degree brings to the table.”

Lt. Cmdr. Matt Powers is one of many such NPS graduates who returned to the school for the MORS Symposium. Graduating in 2012 with a degree in operations research, Powers took what he learned at NPS and directly applied it to increasingly daunting national security questions at the Chairman of the Joint Chiefs of Staff (CJCS) Joint Lessons Learned Division in Suffolk, Virginia.

Powers developed a way to use spreadsheets to identify relevant themes within large sets of text data. This system, which he termed “Content Heuristic Unstructured Parsing and Predictive Electronic Tool” (CHUPPET), enables analysts with varying levels of technological savvy to employ rigorous computational methods to large amounts of unstructured data.

Powers was recently recognized for his work by the CJCS himself, U.S. Marine Corps Gen. Joseph Dunford. The free, Microsoft Excel-based program Powers developed has saved thousands of hours of labor for his office and resulted in more efficient, accurate products.

For Powers, attending the MORS Symposium at NPS was an excellent opportunity to share his work and interact with other operations research professionals.

“You get exposed to things that you otherwise may not have thought of,” Powers said. “You’re learning how other people are solving problems and they’re introducing you to new techniques, methods or practices. The light bulbs are going on all the time in regards to, ‘I have a similar problem, but I wouldn’t have thought of solving it that way!’

“You could do all the research you want, but if you don’t know what you’re looking for, that answer might not emerge,” he continued. “It does in events like this. It lets you see what brilliant minds are doing.”

For Powers, who has been placed in positions where he’s used his operations research degree constantly since graduation, one of the greatest aspects of a symposium like this is its intangible benefits.

“It reinvigorates my passion for what I do,” he said. “To come here and mingle with like-minded analysts who others might think are weird because we enjoy this stuff, it just kind of relights that fire, that analytic passion.”

Since its inception more than 50 years ago, the symposium has sought to cultivate this passion. It held its first symposium, sponsored by the Office of Navy Research, in August 1957 aboard the Naval Ordnance Lab in Corona, California. There were 83 attendees, with four papers presented and one panel discussion held.

Over the years, MORS and its symposium have blossomed into a locus of professional development and esprit de corps for the operations research community. In turn, these opportunities have proven to be a strong resource for NPS, both to students studying operations research and to its graduates, ensuring continual growth throughout their careers.

NPS has one of the nation’s oldest, largest and most respected operations research departments. Established in 1951 with a class of nine students, the university has since graduated more than 4,300 operations research practitioners who have made a decisively powerful impact on U.S. national security.

One of those graduates is NPS’ own president, retired Vice Adm. Ronald A. Route, who recognized MORS for its lengthy relationship with the university. The discipline of operations research is a powerful ally in the Pentagon, he said, where resource allocation decisions are better informed by relevant analyses. And in the fleet as well, Route continued, operations research is the difference maker in developing concepts of operations, readiness and logistics.

“That is the strength of operations research,” he said, “Making a difference!”