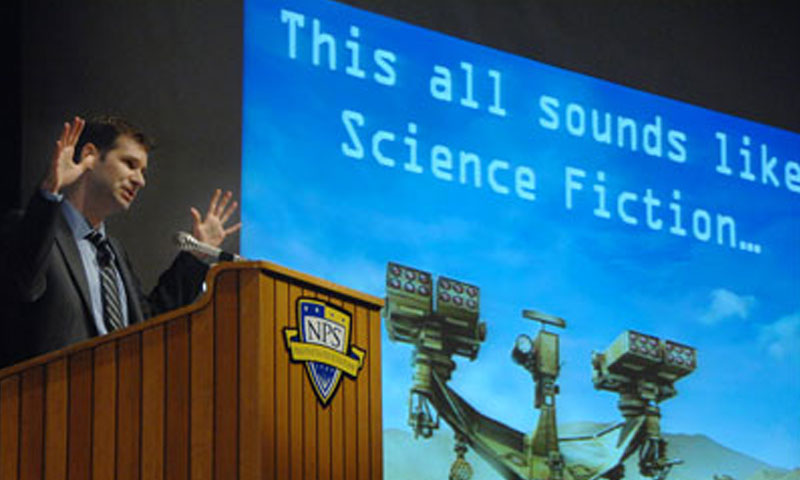 Dr. Peter W. Singer, Foreign Policy Senior Fellow and Director of the 21st Century Initiative at the Brookings Institution, discussed the revolution in unmanned military systems and its far-reaching implications at the Naval Postgraduate School’s Secretary of the Navy Guest Lecture, Feb. 15.

Just one day before “Watson,” the IBM Supercomputer, made history by defeating its human creators, one of the nation’s top robotics experts held NPS students and faculty spell bound with his fast-paced review of the revolution in unmanned military systems.

Dr. Peter W. Singer, Foreign Policy Senior Fellow and Director of the 21st Century Defense Initiative at the Brookings Institution, presented the Secretary of the Navy Guest Lecture on the topic of his latest book, “Wired for War: The Robotics Revolution and Conflict in the 21st Century” (Penguin, 2009), Feb. 15. The book, which made “The New York Times” bestseller list in its first week of release and has been named Book of the Year by “The Financial Times,” is official reading at the National Defense University and a wide range of U.S. Air Force and Navy and Royal Australian Navy organizations.

“Peter Singer is one of the world’s leading experts in changes in 21st Century warfare and in understanding the revolution in the networked human-and-machine world that we’re all immersed in,” NPS Intelligence Chair Andy Singer told the assembled student body in introducing one of Foreign Policy’s Top 100 Global Thinkers.   “Each one of you are part of this revolution, and what you do here at NPS and take with as you move on to your next duty assignments will have a major impact on the shape it takes in the future.”

The speed of that revolution was brought home when the Intel Chair noted that “Watson” was then tied with its human competitors on “Jeopardy.” The next day, it had won.  He then turned the podium over to the speaker, the youngest scholar to be named a senior fellow in Brookings’ 90-year history.

“In 1960, the entire U.S. Navy computing power was less than on the chip in the singing Valentine’s card you bought the other day, and as late as 2002 the director of the FBI didn’t have a computer in his office,” Singer said.  “Soon, our computing power will be billions of times what it is today, and the technologies and capabilities such power will make possible, we can only imagine.

“We’re in the ‘game changer’ that we’ve been saying was coming,” Singer stressed, “a new experience of war in which robots and unmanned systems operated at distances of thousands of miles are being deployed at an exponential rate and changing the face of warfare. Just a few years ago, images like these were still science fiction, but today they’re science fact,” he noted as a metal menagerie of land, sea and air robots flashed on the screen behind him. “These unmanned vehicles aren’t future visions. They’re an integral reality on today’s battlefields.

“Today, for example, IEDs [Improvised Explosive Devices] are the number one cause of death and injuries of our overseas military personnel. To reduce that toll, we recently sent in an EOD [Explosive Ordnance Disposal] trooper to check out a possible IED in Iraq. When the trooper got close enough to see if it was a real bomb, the device exploded. But the EOD trooper didn’t die. The trooper was a 42-pound robot made by a robot company of Massachusetts.

“But we’re still at the horseless carriage phase in this unmanned vehicle and robotics revolution,” Singer cautioned. “Microsoft’s founder Bill Gates has said that we’re probably where the computer was in 1980, when there were large mainframes with just a few functions. And the one thing we know is that in warfare there’s no such thing as a permanent advantage. Today, there are fewer IT [Information Technology] graduates than in 1986, and increasingly our soldiers and sailors are sent out with hardware made in China and software written in India. 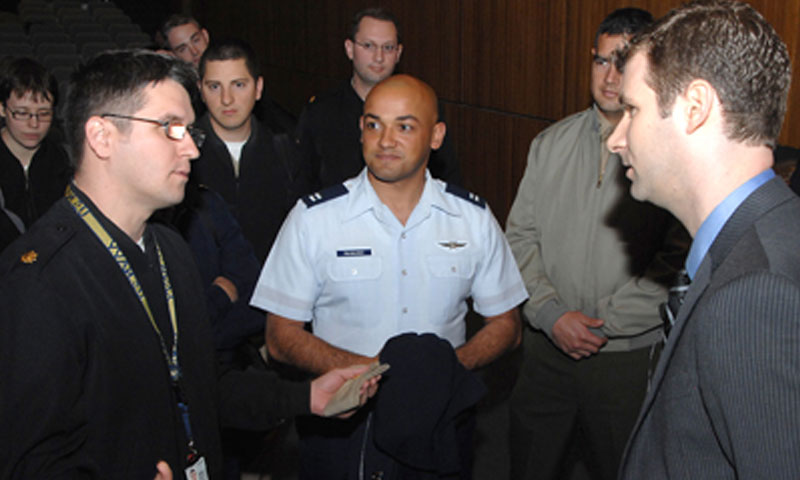 “Warfare is increasingly going open source, so we’re constantly looking toward the civilian sector to pull out the innovations we need to stay competitive,” Singer noted. “And the rapid increase in computing power and robotics is having a flattening effect on who can access and afford to use military technology,” increasing the asymmetric effectiveness of non-state actors.

“But what really matters, even more than the technology, is your vision, plans, doctrine and how to put it all together,” Singer stressed. “We’re leaping into this, but to maintain the advantage, we need to have a systems focus and take the time to experiment to get to the right decisions. We need to say ‘Let’s think this better, not more.’ For instance, [we need to decide] whether we’re going to have a central command and control ‘mother ship’ or decentralized firepower model. Depending on which we choose, we may end up with the 21st Century equivalent of the Maginot Line or the Blitzkrieg. The British Navy, for example, committed to one design type for their aircraft carrier, but the U.S. Navy experimented and one of the designs that came out of that became the optimal way.

“There’s no question we’re getting a huge advantage due to unmanned systems; there are literally tens of thousands of lives saved [because of them],” Singer said. “But the weaponization of drones also raises important ethical and legal questions, and questions of ‘who commands it.’ For instance, the military makes those decisions in Afghanistan, but in Pakistan, it’s a civilian former member of Congress who’s not in the military chain of command who’s calling the shots. And there’s the question of cost-effectiveness. A single Reaper today, for instance, requires 68 personnel [to service and operate it]. There’s a Pentagon program to take the man out of the loop, but that really is ‘the’ ethical question of the new century -- whether or not we should be taking ourselves out of the loop in making these life and death decisions. I think, personally, that [targeting and shooting] autonomy could be a bridge too far.”

In additional to his lecture at the Naval Postgraduate School, Singer has given over 75 presentations on “Wired for War” and the military robotics revolution, including to Congress, all three U.S. military academies and over 40 universities worldwide. He served as the coordinator of then presidential candidate Obama’s campaign defense policy task force, and was named by President Obama to the Joint Forces Command Transformation Advisory Group.

Singer received his Ph.D. in Government from Harvard and a bachelor’s degree from the Woodrow Wilson School of Public and International Affairs at Princeton. Prior to his current position, Singer was founding director of the Project on U.S. Policy Towards the Islamic World at Brookings’ Saban Center. He is a founder and organizer of the U.S.-Islamic World Forum, a global conference that brings together leaders from across the U.S. and the Muslim world, and has worked for Harvard’s Belfer Center for Science and International Affairs, the Department of Defense Balkans Task Force, and the International Peace Academy.

Singer’s first book, “Corporate Warriors: The Rise of the Privatized Military Industry (Cornell University Press, 2003), pioneered the study of private military contractors. “It changed our views on contractors and war, and made us think about what’s inherently governmental, and what isn’t,” NPS Intel Chair Singer said in his introduction. Now in its fourth edition, it was named best book of the year by the American Political Science Association and is an assigned text at Yale Law School and the Army War College. Singer consults on the private military contractor issue to Congress, the Department of Defense, the Central Intelligence Agency, and the European Union. His work was featured in the History Channel documentary Soldiers for Hire.

The speaker’s second book, “Children at War” (Pantheon, 2005), explores the rise of children soldiers in modern warfare. It received the Robert F. Kennedy Memorial Book of the Year Award in 2006 and an accompanying A&E/History Channel documentary, Child Warriors, won a 2008 CINE Golden Eagle Award for excellence in the production of film, television, video and new media. Singer has served as a consultant on the issue to Congress and the U.S. Marine Corps, and the book’s recommendations resulted in changes in the United Nations peacekeeping training program.