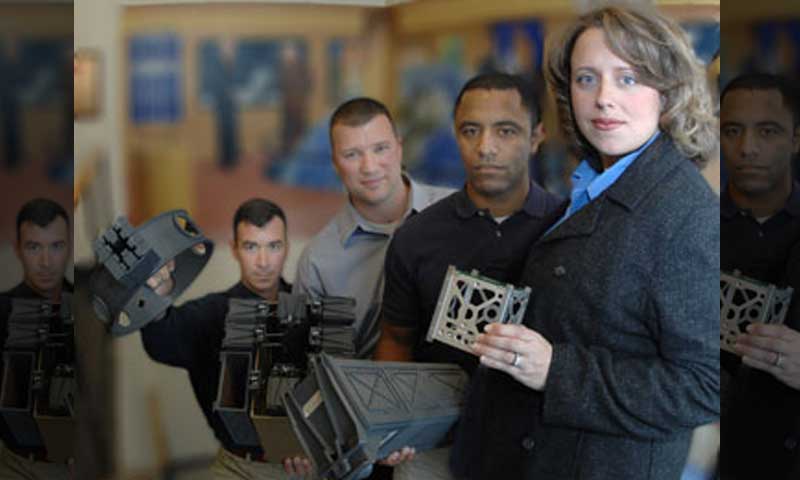 Like the Sputnik launch that triggered the Cold War space race, Russian miniature spacecraft launches have catalyzed the Naval Postgraduate School to design and build a revolutionary new mini-satellite launcher to quickly bring the U.S. into the competition.

Space Systems Academic Group (SSAG) Profs. Jim Newman and Rudy Panholzer and Research Associate Dan Sakoda came up with the idea for the NPS CubeSat Launcher (NPSCuL) that attaches to an Atlas or Delta rocket via a secondary payload adapter and deploys a large number of miniature satellites into tumbling, low-earth orbit.Command signals trigger a sequence of spring releases in the "Jack-in-the-Box" device that catapult the tiny cube-shaped spacecraft carried inside the launcher into orbit. Once freed, the small CubeSats conduct a wide range of missions, from earth observations to testing cutting-edge technologies for spaceflight such as new solar cells, to studying the effects of microgravity on biological samples.

Through the integrated thesis research of a team of NPS master's students, the CubeSat Launcher vision is being rapidly brought to life under SSAG's Small Satellite Design Program.

"Our goal is to create a new 'coach class to orbit' so the we can regularly, quickly and affordably launch the increased number of very small spacecraft on orbit needed to keep the U.S. government, military and academic space community on the cutting edge," said the project's new student program manager Lt. Christina Hicks. "Current U.S. launch opportunities for individual CubeSats are limited and expensive, and most are launched by other countries -- predominantly on Russian rockets -- with the sole U.S. exception being NASA's GENESAT, so there's a real need for quick and affordable domestic access to space for purposes of experimentation and education. When NPSCuL goes up in late 2010 or 2011, it will be both the world’s first high-capacity CubeSat launch and the first U.S. non-NASA CubeSat launch," she noted.

"The wave of the future is spacecraft miniaturization, just as miniaturization was a major turning point for computers," said Newman, the project's lead principal investigator."This project is a unique hands-on opportunity for Space Systems officer students to build a real piece of space hardware that’s a major enabling technology for access to orbit and that will actually be launched, all within a two-year curriculum. Though each is doing an individual thesis, they also work as a team and coordinate at the group level. In this world, very little gets done without teamwork."

Crook, the project's first student program manager, came to NPS with a B.S. in computer engineering. For his thesis, he built a half-scale model and wrote the process by which non-government CubeSats can get added to launch manifests on a space-available basis, sponsored by the California Space Education and Workforce Institute.

"By capitalizing on excess capacity on space-available flights aboard U.S. launch vehicles, NPSCuL-Lite will catalyze CubeSat development by government, industry and educational institutions who want to avoid the challenges and potential issues associated with foreign launch providers," Crook said. "Also, this launcher is a lot more complicated than it looks. All the components have to work together seamlessly and be rigorously tested before they fly."

Dejesus is building a full-scale NPSCuL model and doing the integration, assembly and laboratory testing with vibrations more severe than those that would be encountered in space. "The greatest challenge is understanding the launch environment, because the stresses at launch are literally not of this earth," he said. "The launcher needs to be both strong enough to survive the launch stresses, but also light [weight] enough to make it onto the manifest."

Harris is adapting an existing microcontroller for the command-signal-initiated launch sequencer. "Coming from a B.A. in economics, everything about this project has been a challenge, but we've more than met it as a team," said Harris.

"A significant NPS role is outreach to other players in the CubeSat development community-which already consists of over 100 universities, half of them in the U.S., industry, and DoD and other government agencies-to foster DoD-relevant science and technology, as well as coordinate with launch providers," said Newman. "The Naval Postgraduate School functions in a dual-hatted academic and military environment, which puts us in a unique position to contribute to this kind of technological innovation."

"If interest in CubeSat development continues, NPSCuL-Lite may well establish itself as a standard payload aboard compatible launch vehicles, paving the way for relatively inexpensive demonstration of DoD-relevant technologies and educational opportunities for future space professionals," Hicks concluded.

Previous students who worked on the project were Lt. Matt Erdner, who wrote up some of the concepts and requirements for the CubeSat Launcher; and German Air Force 2nd Lt. Felix Rossberg of the University of the Armed Forces in Hamburg, who did a technical report on its structural design and created a movie simulation of the mini-satellites' deployments into orbit.

Prior to coming to NPS, Crook served on board the USS Maryland (SSBN 738B) as the main propulsion assistant and assistant operations officer. After graduating, he will report to the Submarine Officer Advanced Course in Groton, Conn., followed by a Submarine Department Head tour. Before her NPS assignment, Hicks served as Joint Net-Centric Operations Section Head, N81F; as a reactor mechanical division officer on board the USS Enterprise (CVN 65) as a qualified Nuclear Engineering Officer and Propulsion Plant watch officer; and as the Combat Information Center Officer on the USS Ashland (LSD 48). After graduation, she will report to STRATCOM (J661) as SATCOM Manager for Narrowbank/UHF.

Dejesus previously served as mission commander of Carrier Airborne Early Warning Squadron 125 and as airspace manager for COMUSNAVCENT Manama, Bahrain. He is Airborne Command and Control qualified as a E-2C Hawkeye flight officer. His follow-on duty will be with Carrier Airborne Early Warning Squadron 115, Department Head, in Atsugi, Japan. Before coming to NPS, Harris served on the USS John C. Stennis (CVN 74) as a certified naval nuclear electrician, and was a student naval aviator at Naval Air Station Pensacola.