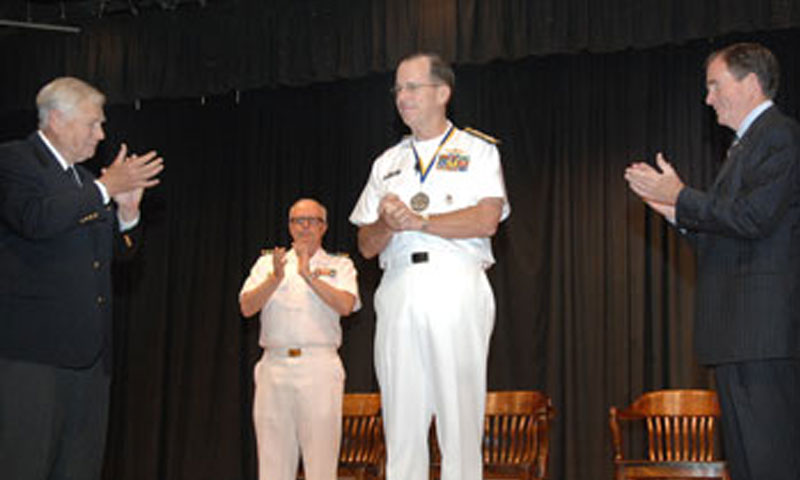 Adm. Mike Mullen, chairman of the Joint Chiefs of Staff, was inducted to the Naval Postgraduate School (NPS) Hall of Fame during an all-hands ceremony August 11.

Mullen, an NPS graduate who received his master’s degree in operations research in 1985, is the school’s 11th Hall of Fame inductee and first alumnus to serve as chairman of the Joint Chiefs of Staff.

Upon receiving the award, Mullen said he was humbled and at a loss for words. “To be able to come back to an institution that both my wife Deborah and I care about so much is indeed special,” he said. “In 1983, I never had any vision of anything like this happening.”

“His commitment to education in general and to this institution in particular is palpable, and has been of great significance to NPS in recent years,” Oliver said. “He is an accomplished naval officer of course, but it is his personal qualities of sincere and thoughtful intelligence, and proactive and compassionate leadership that have propelled him to become the first NPS graduate in our 100-year history to become the chairman of the U.S. Joint Chiefs of Staff.”

Mullen’s former thesis advisor, retired Navy Capt. Wayne Hughes, also spoke at the ceremony and recalled Mullen’s impressive leadership qualities as a student 25 years ago. Hughes commended Mullen for doing “more to continue the school’s value and reputation than any other graduate, senior official or faculty in our 100-year history.”

With an opportunity to speak with the entire NPS student population, Mullen then took the time to thank service members in the audience and called upon the students for their leadership, asking them to take what they’ve learned at NPS to their next assignments and instill their excitement for change. He also urged students to study leadership in a time of change, “because it is often the most difficult and rewarding kind of leadership.”

As he continued his address to the school, Mullen emphasized the importance of reserving time for higher education and training, and said it needs to be embraced across all services. Mullen also recognized the way in which NPS has emerged within a joint environment, and for its broad recognition not only within the military, but among the federal agencies as well.

Mullen’s success, like all 11 NPS Hall of Fame members, only furthers that recognition. “To honor one of our most distinguished alumni at the same time we’re celebrating our 100th year of academic excellence makes this an extraordinary moment in the history of NPS,” Provost Leonard Ferrari said after the ceremony. “We believe Adm. Mullen’s remarkable accomplishments - and those of all our great alumni – speak volumes about the value of this institution and the quality education our students receive.”

The NPS Hall of Fame was established in 2001 to recognize the accomplishments of the school’s most distinguished alumni and friends who have made the highest contributions to society, the nation and the school. Other NPS Hall of Fame members include retired Marine Corps Gen. Michael Hagee, former commandant of the Marine Corps; retired Adm. Wayne E. Meyer, the founder of the AEGIS technology; and Former Secretary of the Army Thomas E. White.