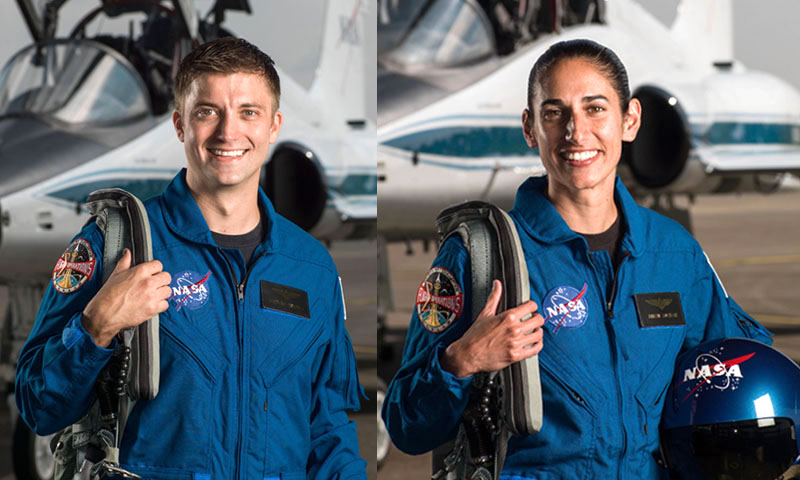 NPS graduates Lt. Cmdr. Matthew Dominick, left, and Marine Corps Maj. Jasmin Moghbeli, have been selected for NASA’s latest class of astronaut candidates. At the master’s degree level, NPS boasts more astronaut alumni than any other university in the world.

Of the 11 candidates selected for NASA’s latest class of astronaut candidates, Lt. Cmdr. Matthew Dominick and Marine Corps Maj. Jasmin Moghbeli have something in common ... a master’s degree from the Naval Postgraduate School. Dominick graduated through the university’s systems engineering program, while Moghbeli completed her studies in the mechanical and aerospace engineering program.

At the graduate level, no other institution on the world can claim more NASA astronaut alumni than NPS, with more than 40 graduates reaching the stars.

“For these individuals to be selected from a group of almost 18,000 highly-qualified applicants is just tremendous,” said Dr. James Newman, Chair of the NPS Space Systems Academic Group, and a former NASA astronaut himself. “All the things they have learned here at NPS really helps to give them an edge, and this is a great opportunity to leverage the things that we are teaching here.”

Dominick, a native of Wheat Ridge, Colo., was serving as a department head with Strike Fighter Squadron 115 aboard the USS Ronald Reagan at the time of his selection. He has accumulated more than 1,600 flight hours in 28 different aircraft models, as well as 61 combat missions and nearly 200 flight test carrier landings.

Moghbeli, a native of Baldwin, N.Y., was serving as quality assurance and avionics officer for Marine Operational Test and Evaluation Squadron 1 where her duties were to test H-1 helicopters. She has accumulated more than 1,600 flight hours as well as 150 combat missions.

“These individuals are about to embark on the adventure of a lifetime,” said Newman. “Their lives are about to dramatically change, and they will be getting a lot of national exposure. This helps to communicate our values as a country and enhance relationships with our international partners through our space program.”

Both officers will report for duty in August 2017 for two years of training as astronaut candidates at Lyndon B. Johnson Space Center in Houston, Texas. Upon completion, they will be assigned technical duties while awaiting flight assignments.