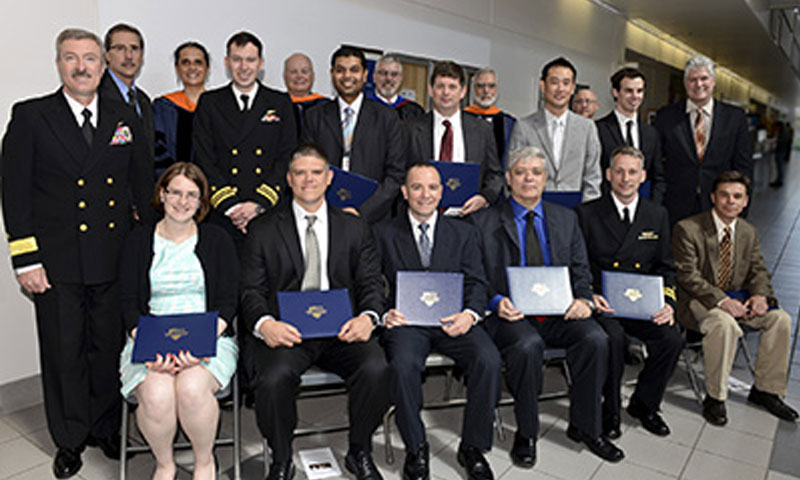 The 11 employees in attendance were among a group of 32 students from across NAVAIR’s nine geographically separated sites to graduate from the two-year NPS programs in systems engineering (MSSE), engineering systems (MSES) and systems analysis (MSA). Headquartered in Monterey, California, NPS was named in March by U.S. News & World Report as one of the best graduate schools in the country, with the MSSE program ranked 20th among more than 1,300 graduate schools.

“This program produces leaders for the future and it also enables us to take advantage of their skills while they’re doing the program to do the real work that’s affecting the fleet,” said Darrah, the NAVAIR sponsor of NPS’ systems engineering program, during his keynote address. “The things that you all learn in the program and how you apply them to developing products for us are absolutely critical to ensure that we maintain dominance of the maritime domain.”  Darrah is also the assistant commander for Research and Engineering for NAWCAD.

NPS’ master’s programs are rigorous, requiring students to take a total of 16 courses, two evenings a week while working full time and maintaining at least a 3.0 GPA for the MSSE and MSES programs. Students in the MSA program must take two classes per quarter while working full time. Students said support from their full-time jobs helped them manage hectic schedules.

“My supervisor was very accommodating in regards to working on my masters,” said Michael Lay, MSA program graduate and NAVAIR operations research analyst. “Thanks to the understanding in my branch, I was able to keep up with my class schedules.”

NAVAIR and NPS teamed up in 2008 to create MSSE and MSES programs to provide an opportunity for military officers and civilians to improve their expertise and potential as program systems engineers. The MSA program was designed to provide education in systems analysis as a basis for aiding key decisions on force requirements, weapon systems and other defense matters.

While in the MSSE and MSES programs, students worked on three separate capstone projects, which are an opportunity to study real-world systems engineering problems confronting NAVAIR. Normally, projects involve an engineering system, such as an aircraft, a weapons system, or an information system. One capstone project this year focused on the Interim Flight Clearance (IFC) process as applied to small unmanned aerial systems (UAS) used in research by NPS.

“The project team studied the IFC process and the interaction between NPS and NAVAIR to determine methods that would result in faster IFCs while allowing NAVAIR to guarantee that risk in testing has been identified and minimized,” said Stephen Williams, a capstone leader who works full time as a supportability team lead for the E-6 aircraft. “These methods included improvements in documentation, better means for information exchange between NPS and NAVAIR and tools for determining risk in operating small UAS.”

The ceremony also presented the Wayne E. Meyer Award to student and faculty members who displayed technical expertise, leadership and willpower. Williams earned the student award, with faculty honors going to Paul Montgomery and Ron Carlson. Two other students, Wilson Casillan and Erik Merk, were also award winners, though they did not attend the ceremony.