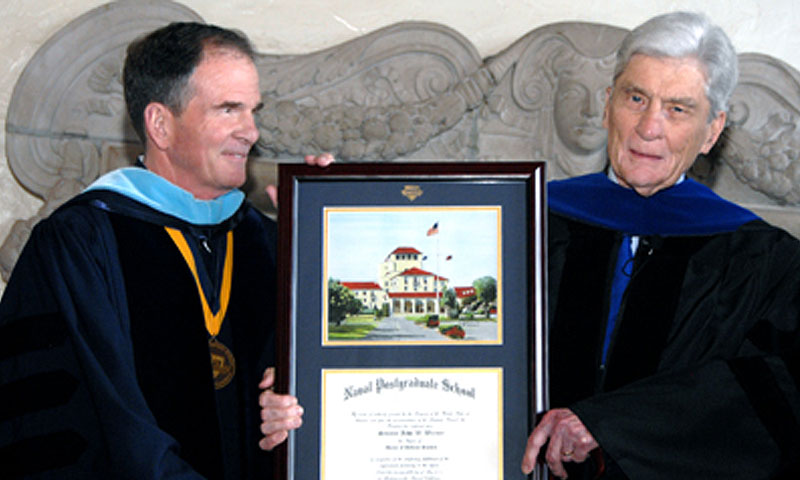 The Naval Postgraduate School (NPS) honored former Senator John Warner with an honorary Doctor of Military Science degree, May 25, during a formal ceremony held on the university campus. Warner served both as an enlisted Sailor and an officer in the Marine Corps before becoming the 61st Secretary of the Navy (SECNAV). After departing from his position as SECNAV, Warner was elected as U.S. Senator representing the Commonwealth of Virginia where he served five-terms in office spanning more than 30 years.

“Senator John Warner has served his nation in many capacities,” said NPS President Dan Oliver in his remarks opening the ceremony. “As an enlisted Sailor, a Marine Corps officer, and as a senior naval leader, he has demonstrated all the qualities of a modern-day patriot. Senator Warner has an innate proclivity for public service in addition to a strong commitment to education, both of which have made him exceptionally deserving of an honorary doctorate degree.”

Oliver went on to detail many of the unique attributes that made Warner an exceptional leader and concluded his formal remarks by reading from the formal citation justifying the degree.

“During his career in the legislature, Senator Warner stood steadfast in his unwavering commitment to our men and women in uniform,” noted Oliver. “He has unapologetically acted in their best interests, even if it meant crossing party lines. His expertise in military affairs made him a respected member of the Senate Armed Services Committee, where he helped secure funding for critical warfighting capabilities."

After formally presenting the doctoral degree, Oliver and university officials draped the ceremonial regalia over Waner’s graduation gown, signifying the colors and honors of a Ph.D. recipient in a commencement ceremony for one. Warner humbly accepted the degree and concluded the proceedings with recollections of his distinguished career in politics and experiences serving in uniform.

“I humbly accept this honor with the deepest sense of humility,” noted Warner in his acceptance remarks. “I would like to say thank you to the generations of men and women that served in the United States military, and as I reflect on this award, I would like to submit that education is an integral foundation for those men and women serving the armed forces.”

Warner entertained the crowd for nearly an hour with sea-stories and excitingly woven tales of debates on the Senate floor. He also shared with participants the moment he personally realized the importance of education in the military. 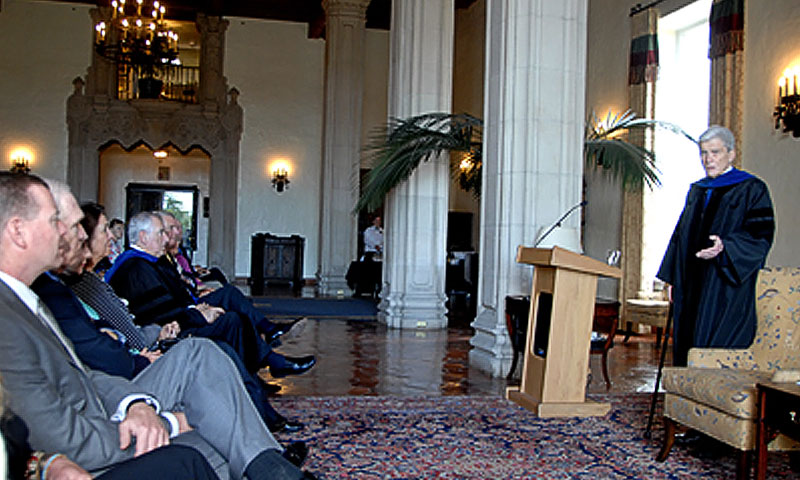 Former U.S. Senator John Warner delivers a speech after being presented with an honorary Doctor of Military Science degree from NPS.

“We were herded into a big gymnasium, and a Chief Petty Officer got up there with a big bullhorn and called us to attention,” recalled Warner speaking of his military induction experience. “Members of the group were asked to stand up if they could not read or write. I have to tell you, 10-15 percent of that newly-formed class stood up. That was a very, very important experience for me. The importance of education in the military was quickly driven home when I realized that the person standing next to me, that couldn’t read or write, could be responsible for my life when we got aboard ship or in a foxhole.”

Throughout his distinguished career, the Honorable John W. Warner has exemplified dedication, drive and character that are the hallmarks of the role models our military and civilian students need, noted Oliver is his closing remarks. They too can strive for honor and character in service to our country.

In 2009, Senator Warner was acknowledged for his dedication to his country, and the U.S. military, when the Secretary of the Navy announced that a Virginia-class attack submarine would be named in his honor – the USS John Warner. He has also been awarded the first ever National Intelligence Distinguished Public Service Medal for his steadfast support of the intelligence community, and for providing critical information to the warfighter.

But perhaps one of his most lasting achievements in support of the warfighter came near the end of his extraordinary career in service. In 2008, the Senate passed the Webb / Hagel / Lautenberg / Warner G.I. Bill, greatly expanding the benefits of the bill, in addition to adding more flexibility in how service members can use them.