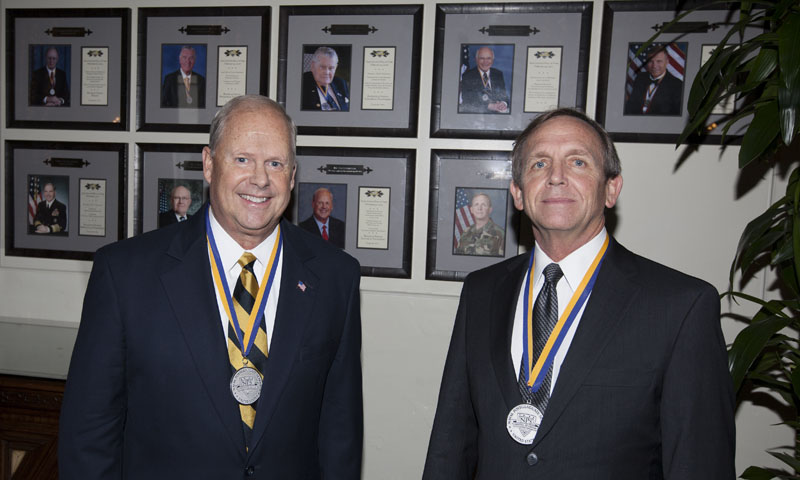 Olson served 38 years in the Navy, achieving the unique distinction of being the first Navy SEAL to earn the ranks of three- and four-star admiral. In welcoming Olson to the prestigious hall, Tighe offered testament to the sacrifices made by the national security affairs alumnus.

“It would be appropriate to say he led by example,” Tighe said of Olson, “demonstrating a tireless commitment to excellence and service to his country through his military career, from which he later retired as the longest serving SEAL the Navy had ever seen.  Serving in the Special Operations Forces is not for the faint of heart, and Olson accepted the risks that came with serving his country in one of the most elite naval communities.”

While Olson humbly took to the podium to accept the honor, he admitted his attendance at NPS occurred as a matter of luck and circumstance.

“I consider myself an accidental inductee,” Olson noted. “I was an Arab linguist and Middle East Cultural Specialist studying at DLI [Defense Language Institute], and I started sitting in on classes at NPS. Eventually they decided to give me credit for them,” he added.

“I am a fan of what this institution has always been," Olson continued. "The freedom of an academic environment and an academic staff that encourages freedom of thought. My experience at NPS was one of the most extraordinary experiences in my military career.”

Olson stressed the importance of higher military education in an era of modern asymmetric warfare. He noted that success on the battlefield is not simply a matter of who has the best equipment or the most lethal weapons.

“We have to be able to think our way of out of conflicts," he stressed. "NPS, as an institution, is crucial in its ability to produce professionals capable of accomplishing that task."

The second inductee into the university’s Hall of Fame left his mark on national defense not only during his time as both an active Marine Corps officer and reservist, but also during his several years as a leader in industry as well.

Walt Havenstein recalled not being able to answer a technical question about a radio posed to him by a young lance corporal. “He did not want to know how to operate the radio, he wanted to understand the magic inside, and I could not answer him,” Havenstein noted. “But NPS gave me the opportunity to turn that inadequacy into opportunity.”

And Havenstein would capitalize significantly on that opportunity, turning his education and a dedication to hard work into a legendary career in industry, culminating in more than three years as Chief Executive Officer of Science Applications International Corporation.

As accomplished as his career in industry was, however, it’s been his role as Chairman of the Board of FIRST (For inspiration and Recognition of Science and Technology) that he is most proud of, exerting a tireless commitment to “create a world where science and technology are celebrated,” he said.

“Mr. Havenstein has distinguished himself beyond a stellar career in industry, serving as an unwavering champion of education for youth in science, technology, engineering and mathematics programs,” Tighe said. “As Chairman of the Board of Directors for the non-profit organization FIRST, Mr. Havenstein helped inspire future generations of leaders and innovators through hands-on education.

“He is a firm believer in the transformational power of education, and its critical role in American prosperity for the future,” she continued. “That belief has translated into a contagious enthusiasm for giving back to his community. By his example, countless individuals and organizations have followed his lead.”

Olson and Havenstein are the 18th and 19th alumni respectively to be inducted into the university Hall of Fame. Other notable members include former Chairman of the Joint Chiefs of Staff retired Adm. Michael Mullen; Permanent Secretary, Thailand Ministry of Defense General Apichart Penkitti; and former Commandant of Marine Corps retired Gen. Michael Hagee.